I have (accidentally) announced a world record attempt. I woke up one morning and it seemed like a good plan somehow. Now the mornings are more along the "oh shit, what have I done!" kind of line. You might ask how this happened. Well. I blame Andrea of Only One. He fixed the final part of my mouthfill, making way for fancy ideas to get into my head. As this is all his responsibility, I have come back to Sharm, where he will be in charge of everything, and if I don't make it it will be his fault! Must have the excuses ready at a really early stage of proceedings after all. 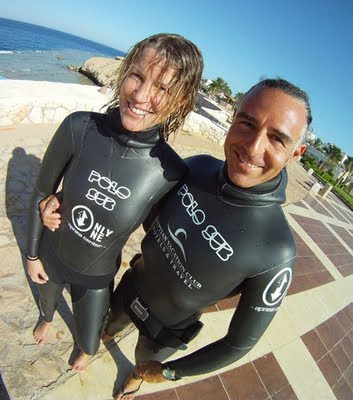 We have been training for a week, which has mostly consisted of the guys trying to rescue some remnants of what we did in April after the hectic, crazy month I spent back home. There wasn't a lot left. We started off with no limits dives on the head down sled, and I was having contractions on the way DOWN on a 30m dive! No limits! Can you imagine? It's just wrong, that is. Meanwhile, there is the small detail of me having announced a variable weigth world record, so I will have to swim up. Boss-instructor arrived on the first day and gave me the program. It involves a mix of dynamic and swimming in the pool every morning, plus streching, plus breathing exercises, plus mouthfill exercises. When am I to work on my tan I ask you? Looks like it will be a tough month.

Some things are at least working by now, and after I took a mouthfill from ten to sixty meters head down four sessions in a row, the coaches gave in and we went to play with the shiny, new, lovely toy: the monster no limits sled! 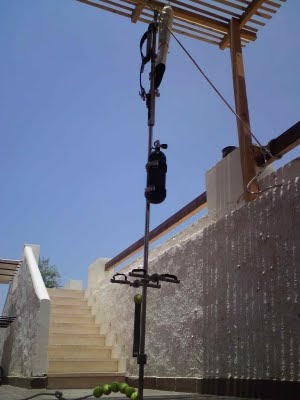 I think it is a bit like a space ship. It should have a fancy name, like the delta flyer in star trek. 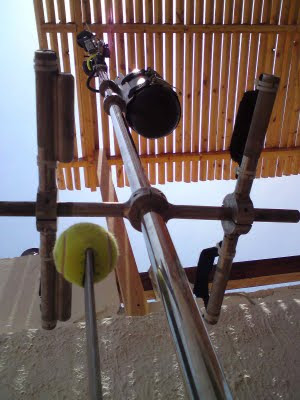 We have it set up for tandem at the moment, since Andrea and I will be doing some deep diving together. I did a sweet and easy eighty meters with it yesterday, lots of fun except for the cold water inflating my suit from ten meters onwards during the 60m warm up dives. Tape. Will buy tape.

Can't wait to do more! I simply love new toys. Meanwhile, there was something - oh yes - 24 days to go till the world record attempt. That is - hold on - less than four weeks!!!