The photo below is not a result of freedivers suffering from cabin fever, but an attempt to strech the (slightly too tight) necks on my lovely new Polosub wetsuits. The one on the right is the 7mm top that will hopefully make me float up like a cork from 40m on my variable weight world record attempt. I have been trying my best to delay wearing it, but boss instructor forced me to put it on the other day, so I would get used to it. 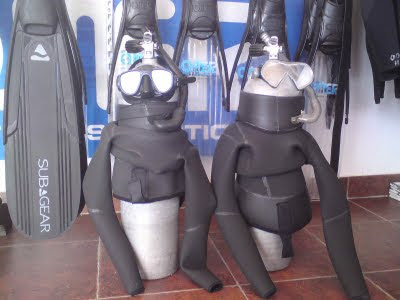 Now. The buoyancy thing might be nice, but try wearing a 7mm suit when it is 42°C outside. I was not happy, and even less so when Andrea said "oh look! A Zodiac!" He meant me. Charming. Problem is, I do feel like a Zodiac in the 7mm. The guys added insult to injury when they taped my legs with brown packing tape on the platform. I got quite upset, wailing "but, but, it is sooooo ugly! Everything is ugly!", which had Andrea promise to bring a marker pen to paint some flowers on the tape next time. I was unimpressed by this suggestion, and anyhow, he was still in the doghouse for the Zodiac comment, which he then tried to get out of by saying: "but there are nice Zodiacs!" Imagine! What a compliment! Just what a girl is looking for. Sweetie, you look like a lovely Zodiac today! Hmpf. 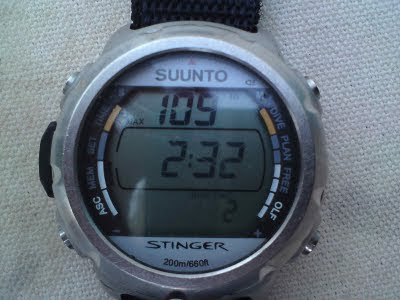 Zodiac suit on and legs taped, we have been doing some funky dives on the tandem no limits sled, getting down to 100m with no problems to speak of. The fun started when we moved the target to 110m. It's the magic-100m-barrier. You have to hit the wormhole just right with the deltaflyer, otherwise, not a chance. First try we made it past the 100m mark, but we were so fast, I couldn't keep up equalizing and hit the brake, thinking we were way off the bottom. Turns out we were - by a whole meter! I stopped the sled in 109m. It will be hard to live that one down. 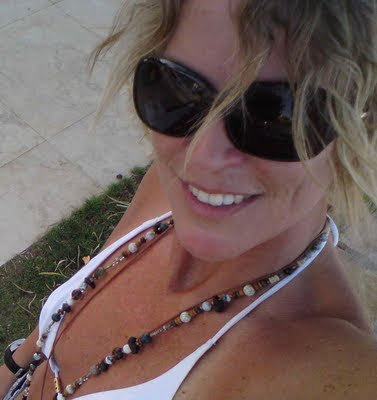 On the whole, it's all very well, but there is something going on with my mouthfill and I am running out of air too early. A review of the stunning - and embarassing - sled camera footage showed that the amount of air gained in my cheeks when I charge it was equal to, say, a couple of peas. I got quite a talking to by my two coaches for that one. Marco then made me inflate my cheeks right there in the office, and he kept saying, no way, more, put more, you have to relax the muscles, it can't be, you MUST be able to fit more in! And anyway, why are they (the cheeks) uneven? All my cries of it's full, it's full, honest! Did not impress him and he commanded me to go check in the mirror why the left side is inflating more than the right. I was baffled. What the hell do I know? It seems boss instructor has worked it out. It's the dimples. They are uneven. Have you ever heard of such a ridiculous problem?

Somehow the two Italians still have confidence in their ability to teach me. Marco has gone and announced the tandem no limts world record attempt for me and Andrea. Dates are: 25-30th June. Which is starting - hold on - TODAY!! We are currently at 113m.