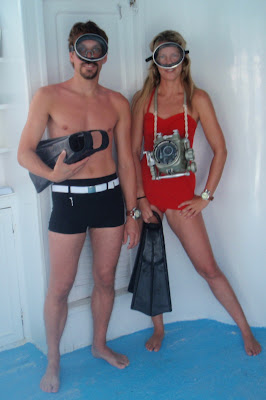 I know I have been bad with my blog recently. There is a big chunk missing from Okinawa. My excuse is, I was depressed, and then I was hungover, from the party. Here is the short version: everyone did their thing, and then the Danish guys won. It was beautiful.

Truth is, I have been unable to do any writing, because I travelled back in time to the year 1952, and as we all know, there was no such thing as blogging, emailing, or mobile phoning back then. While I was still in Okinawa, I had a phone call from a production company looking for someone to double the actress playing the lead in a television movie about Hans and Lotte Hass. For those of you who still think Cousteau was the dude: Hans Hass was there first. He was taking pictures and filming underwater as early as the forties. Check out some of his documentaries, if you can, they are amazing – in black and white, manta rays, sharks, the life on the reefs, you name it. 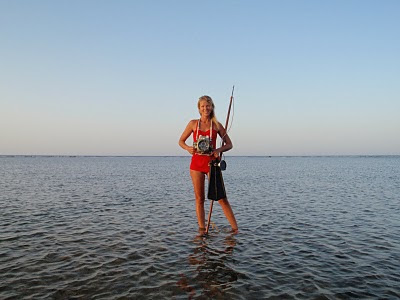 As soon as I got back from Japan, they carted me off to Vienna for a day, to have my wardrobe fitted. This turned out to be a bright red fifties pin up style bathing suit, which made me kind of nervous, since none of the production team had seen me except in photographs. Imagine they look at you and go: gosh, she’s a little fat! Just as I was standing there on a full exhale to get zipped in, the producer in charge walked through the door with his second in command in tow. “Wow” was the comment, which was a relief, let me tell you. A day at the hairdresser completed the look with top-notch extensions, which was an experiment that once again proved one thing: men are stupid. They will believe anything. Including that a woman’s hair can double in length overnight. Best not to tell them the truth, ever. Illusions are a lovely thing! 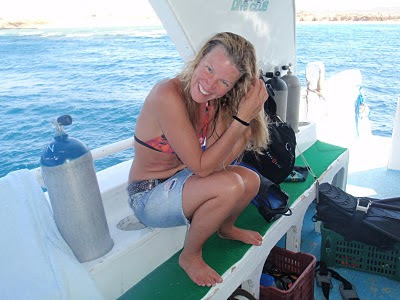 We flew off to Egypt with a film crew experienced in the multiple problems that arise in foreign places, savvy to the world and not easily fazed. Or so they thought. Their Egyptian journey started off with a minibus-versus-truck battle on the road to El Quesir. What can I tell you? The minibus lost. No one was hurt and the equipment was safe, so off we went all piled on top of each other into the bus that still had sides and windows. 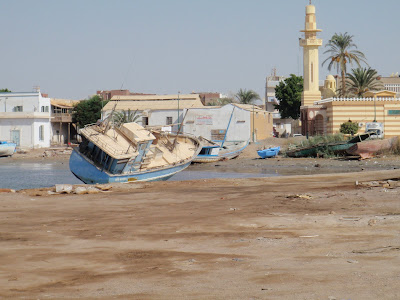 El Quesir is typically Egyptian place: dusty, with a couple of fancy hotels and a couple of not so fancy ones that are busy sinking into the desert but have something one might describe as character. If you are used to Egypt, this is just normal, and much nicer than the full on tourist hell holes, but if you are new to it all, turning down the dirt road to drive past the dead goat and the skinny donkeys towards the Fanadir hotel, having just escaped the monster truck crash, is a special experience. I believe we were also a special experience for the hotel staff. There were around eighteen of us. The sum of the other hotel guests present when we arrived was two. You get the picture. There was still the Egyptian plumbing and the standard jet engine aircon left for the guys to discover, as well as the fact that faced with a desire for ice the bar staff would look stunned, shrug, say “no have”, then smile happily. 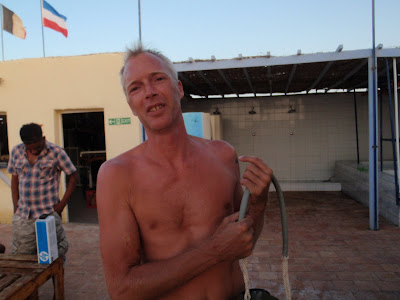 The first day was spent setting up equipment, and I got to meet Daniel. The man is an intriguing mix between mad professor and McGywer. Give him a piece of string, some matches, a couple of cable ties and a little washing powder, and he will make you a rocket that will fire chickens at cars or some such thing. He is also an excellent diver and provides underwater everything to the film industry, so they got him to build a whole bunch of equipment that looked just like the stuff Hans Hass dived with in 1952. Here he is, testing his own rig: 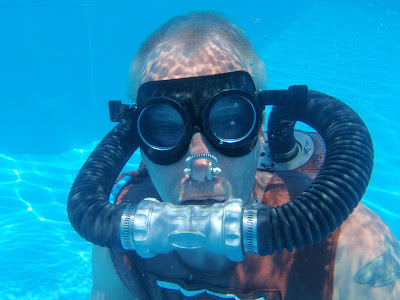 We were made to sign in at Pharao Divers, which was funny since they asked me when I had been diving last, and after thinking long and hard, I realized it was two years ago. I had a feeling this would not go down well, and with visions of a check dive in my near future, I put on my poker face and told them it was two weeks ago, which it was, only it was freediving. Never mind. We went in to check-dive the film units - a mixed experience. First, the lid blew off the pressure gauge on Ingo’s (Hans Hass double) gear, then, just as I was swimming along happily at ten meters, I took a breath and filled my mouth with nothing but water. Zero air. Since I had zero buoyancy, a swim to the surface did not appeal and as I managed to get a sip of air through eventually, I continued the dive like that. Getting out, Daniel asked me if all was well, which it was, except for this minor detail. The other detail was that the old school fins were about six sizes too big, so I was holding onto them by curling my toes, which is not a comfortable (or effective) way to swim. 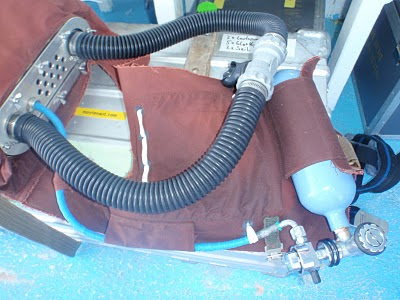 It was soon clear that safety diver Fred would need assistance, so we recruited one of the dive guides from Pharao, a Danish guy called Tore. He turned up on the boat wearing a chicken vest which said “Safety Diver” in orange letters on the back. Hmmm. Familiar. Turns out he was a safety diver at the world championships in Aarhus, and since Elisabeth and I were the practice victims, he most likely has rescued me already! Anyway, he was assigned to me and had the not so easy job of swimming me around the place for the next two weeks. I have been involved in some complicated diving, but what we got up to tops it all. We had a main boat, moored on the edge of the reef, from where we all took off in a Zodiac, to get to the actual scene of filming, where we’d anchor. Back on the main boat, a monitor was set up, with our DOP jumping up and down waiting for a picture. This arrived (Well. Sometimes) via a cable plugged into the camera, running to the Zodiac, where either Ute or Leif would bake in the sun all day, overseeing the picture being sent back to the main boat monitor. So Mathias had an image, but he wanted to be part of the action and yell at us, too, which he would do via an underwater loudspeaker lowered from the Zodiac, which was connected to a walkie talkie, which Mathias would shout orders into, which we would then hear (or not, depending) down there. Apparently, so did everyone else who had the misfortune of diving the site. Poor scuba novices were confused for two weeks by commands such as: “Achtung! Very Good! Noch einmal! Weiter schwimmen! Keep Swimming, Keep Swimming, Keep Swimming....” etc. 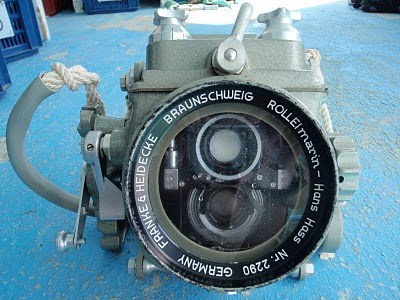 It was lots of hard work, but also lots of fun. The diving was challenging, which I love, and I was freezing most of the time, which I don’t love at all. Main problem was, we had very little air in the units, so I was busy saving it a lot. Also, since the units have no buoyancy but are equipped with steel tanks, I was as heavy as a stone. With my lovely fins, which, as Tore pointed out, gave me about five percent propulsion, I did not stand a chance of going anywhere but down. The most fun I had the entire time was a scene where I had to descend from the surface with a huge ancient look alike video camera housing. I sank so fast, it felt like sled diving! I was busy whooping and having a blast when I saw the reef rush towards me at about 40m. Just as I was wondering how I would avoid pulverizing the coral head below me with the steel housing, Daniel turned up and I dropped the thing into his arms. Next, I realized that slowing myself down was not going to happen, either, but Tore got there before the reef, so all was well, and I was grinning all the way back up. Usually, it’s once more, again, one more time, repeat that last one, do it again, etc, etc, all the time, but don’t think you get to do something twice if it’s actually fun! Tsss.

There was a distinct lack of dancing girls or other entertainment at the Fanadir bar. Eventually we had a day off, and the night before turned into a longish one right away, with a splash-diving competition in the pool at 1am, organised by our camera boss, Mathias, who cannot be still for twenty minutes without thinking up some nonsense. Well, what can you expect from a grown man who goes by the nickname of Matze. I believe he was genuinely disappointed at not winning the splash diving comp. He’d fit right in with us freedivers! 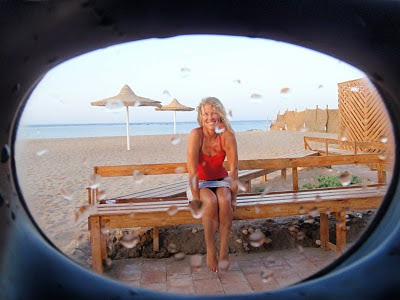 Just when they all thought Egypt was the worst place they had ever worked in, but they had it sussed now, we had the final round: all permissions for filming were denied. Turns out, they were not granted in the first place. We ended the trip with a lovely man from the coast guard coming aboard to pick up everything that looked vaguely suspicious or like something he could use, to take it back to the police station, to be impounded, a thing they love doing, but usually it’s cars. Anyway, what our guys did not realize is that they were kind of nice, in so far as none of us got arrested, so we all went off in a taxi to Hurghada and flew home the next day, luckily with most of the filming done.

I’ll be over there again before long, taking taxis to the blue hole, with my wetsuits and monofin. In the meantime, time travel has come to an end and transported me, slightly dazed and confused, back to the bookshop, and my customers. This morning, I realized that the window after next is the Christmas window, ohhhh nooooooo ...

Then again: it’s nearly snowboard season. Maybe I’ll get a retro outfit, then Remo and Jörg can’t complain that I’m invisible in the videos. Hmmm. Red?