Skandalopetra – or: going down with a rock 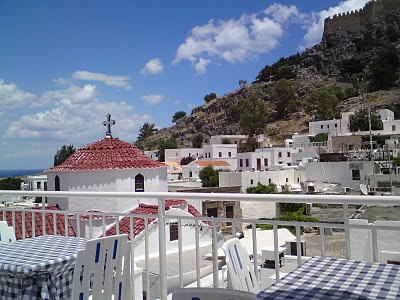 There is not much to be said about the last comp day, except that it would have been a day for Linda’s chicken card. Lots of athletes turned early, including some of my coaching protégées. I will have to consider dropping them, as I am clearly in high demand and cannot waste my time on chicken divers. Also, they are spoiling my track record. My only success was Jakob, whom I managed to talk out of his holiday mode and into doing a nice dive. I just told him he had to put pressure on Jesper. Works every time.

I was a failure myself, turning once again at exactly 53m with a non cooperative left ear. Coach Martin would be proud of me for being so sensible and not pushing things. I think I’m quite proud myself, actually. Anyway. Now for the fun stuff: as soon as we got out of the water, we entered party mode, as usual. As is standard custom, this was hindered by the dreaded banquet, but we have been well trained by previous occasions and got all the speeches out of the way, briefly enlivened by throwing cherries at the French table, which we got told off for quite sternly. The party finally kicked off when we decamped to the bar, which was next to a pool. Now you may guess what had to follow. It was all instigated by none other than Nicolas Guerry. He started by going up to people and telling them he needed to just check their key card, which he would then flick into the pool. I am glad to report that I was not the only one thick enough to fall for this. I doubt there were many people left with access to their room after an hour.

After I got chucked into the pool at Rush in Dahab after a triple depth party a couple of years ago, an experience which I did not appreciate, I had decided to stay dry this evening. The first to go in was Stavros, and soon Nicola and his friends were on the prowl for new victims. Strategy is everything in situations like this, so I had cunningly placed myself next to the largest man around, in the shape of South African cameraman Barry. As soon as any wet men came to get me, I just flung my arms around his neck and clung on for dear life. This proved amazingly successful for about an hour. The guys approached several times, thought about various angles for grip or lift, simply got pushed away by Barry once or twice, saw that they had no chance and left to find another victim. Just when I thought I might stay dry, after all, they hit upon a new plan: they put Stavros in charge of the military operation to get us in the pool. It took about ten guys. It was also the beginning of the end of the party, as everyone was now too cold to continue much longer. The poor guy in reception was faced by around forty freedivers, dripping all over the floor, demanding new key cards. Not sure if they will have us lot back next year... 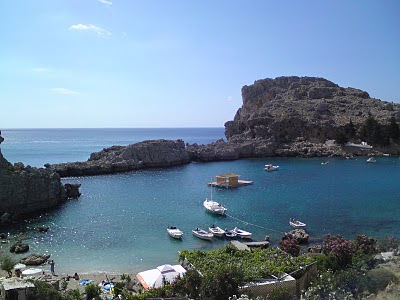 Next up was a hangover flight to Rhodes, to take part in the Skandalopetra Games at Lindos. Skandalopetra is one of the oldest ways to dive, used by the Greek sponge fishers hundreds of years ago. It’s simple: a rope is tied to a flat marble stone. You just hang on to the rock to get pulled down, and when you have enough, you pull the rope and your mate at the top pulls you back up. Essentially, it is a very basic form of no limits diving. Herbert did a world record of 107m last year, which the organisers had asked Stavros to come and break. There is a minor problem: you are not allowed a wetsuit, fins, mask, or anything else, except swimming trunks and a noseclip. This presented me with a challenge the guys thought quite excellent: you jump in with a 10kg stone - I promise you: the bikini does NOT stay on. Somehow, everyone wanted to take pictures or be in charge of video all of a sudden. But hey, we women are creative with outfits, so I managed to dig out a sports top and a pair of hotpants that I held in place with my weightbelt. It worked beautifully, except once, when I forgot to tighten the belt and it nearly all went wrong. 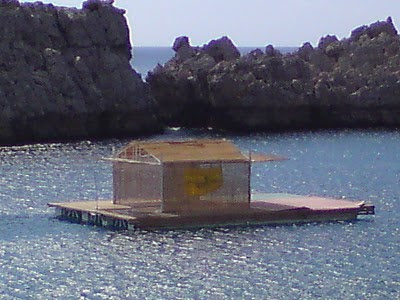 The event was organised by a guy from Thessaloniki called Nicolas. He was extremely welcoming and kept telling us about the 100 people that would turn up shortly. We kicked off with about ten, which was fine by us. The municipality had arranged an enormous platform for us to dive from, which was all very well, only the thing did not seem very seaworthy and needed to be towed out of the very narrow entrance to St Pauls bay, in which it was moored, every day. The first time, we took bets to see if we would be shipwrecked on the rocks on the way out, or out there in the distant sea when the wind picked up, smashed by the waves. Since the platform was kind of yellow, it quickly got dubbed the ‘SS Saganaki’ – Saganaki being a slab of fried cheese, for those who are not acquainted with Greek cuisine, and also Will’s favourite dish of the week. The SS Saganaki was piloted by captain Tsaziki, who managed to shout commands on anyone who came near. Amazingly, they anchored the thing in around 70m of water on the first day, so we did actually get to do some dives. Visiting the thermacline at 27m with no wetsuit on was an interesting experience, I tell you. As we were told that it was customary to compete in teams, Philipe and I joined forces and became team Germany/Canada. When I got ready to handle the ropes for his dive and to pull him back up, I was greeted by slightly worried stares from the Greek side, who were clearly not used to the sight of a blond girl handling ropes. It was surprisingly easy to get him up – as long as the diver stays streamlined and you don’t break you rhythm, it is fine. Had there actually been a competition, I reckon team Canada/Germany would have kicked ass. 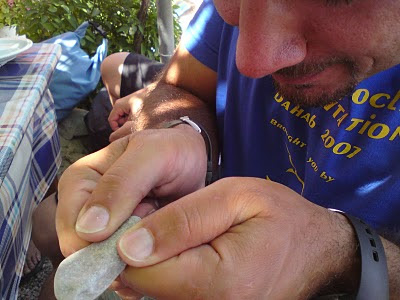 Every day we were told 100 people would arrive, every day we went out with ten divers and a lot of hangers on, including a dog. As six of the ten divers were made up by us lot, I am a little surprised at the lack of Greek participants. Maybe they were all frightened away by the prospect of being beaten by a girl and a Canadian? Anyway, Stavros was to do a deep training dive on day three, so we went out with the Saganaki ship, dropped the 110m of anchorline in 105m of waters and proceeded to drift along the coast towards Turkey at a rate of several knots, until we got stuck in around 52m of water, where some guys jumped in to dive, only to find that there was a ripping current taking them off at a 45° angle to do a no limits dynamic instead. It was weird. The platform was populated by terribly serious looking CMAS officials, which always brings out the very worst in us, in the shape of a quickly rising urge to be extremely silly. Since Stavros could not do his dive, we had him visualise the performance instead (see picture above), and to be proper, we made Manos visualise the safety, Fred visualise taking pictures and Will visualise pulling the rope. Had we been able to find a judge to visualise giving the white card, the record would have been valid.

Next up is a flight to Berlin, where I have ten hours to unpack and repack my bag, visit the bookshop to do all the work I should have done in the last four weeks, and rush back to the airport for a looooong journey to Okinawa, Japan. Sushi! Can’t wait.