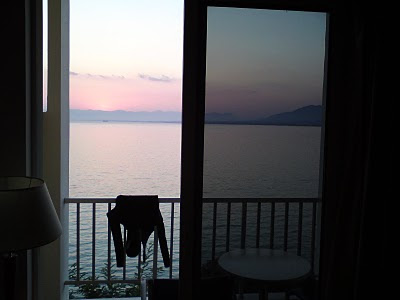 So. Much in my usual style, I declared a record dive without actually bothering to try the depth in training first. Surprisingly, I was not really feeling stressed at all this time, and did not spend all evening going round saying “I’m so nervous, I’m so nervous, I’m so nervous” to anyone who crossed my path. I woke up at five, but just calmly went back to sleep again, very unusual. Having my oatmeal with banana for breakfast, I was waiting for the nerves to hit me, but nothing. The “oh shit what have I done” moment finally arrived when I was putting my wetsuit on, and it was so bad, I actually considered being sick there and then. 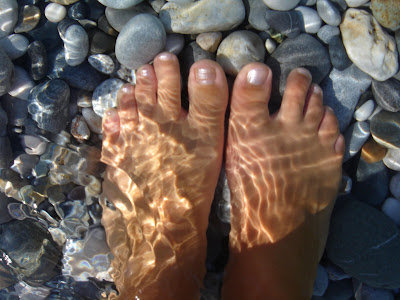 Trying to see if staring at my feet in the clear water will make the nerves go away. It does not.

Outside, I was greeted by perfect conditions, a glassy sea, slightly hazy, in an eerie and very atmospheric way. I was the only one going for a record that morning, so had the warm up lines and the safety studs all to myself. The only non-Greek safety stud, Daan, was appointed as my coach, a role he took very seriously, including massaging my foot – I think he was trying to take my mind of giant knot that was in my stomach. I did just two warm-ups, both rubbish, decided they were not going to get any better, and went to climb onto the sled. Nik from Cyprus was in charge of my attempt, and did a great job at making me feel like everything was under control, including letting me know that he would be personally meeting me at 25m, which I love – nothing like knowing that someone you are happy to completely rely on will be there to keep you safe when you are going for the hugest dive of your life. Except for continuously thinking “oh shit”, all was well, so I released the brake and shot off into the blue. Equalisation worked very well, until 89m, where I could not clear anymore, so I stopped the sled and spent a few seconds trying to move the little bit of air I still had in my mouth into my ears, with no success. Hmmmm, I thought, how far can it be, looked down to see if the plate was anywhere near, and spotted the tennis balls. Seconds later I hit the bottom, with pressure on my ears but lots of air in the mask. Well. One might say there is room for improvement.

100m!! I admit to feeling excessively pleased with myself as I was finning back up. Going round in my head was mostly “I did it, I did it” with a brief “wow, it’s a long way” thrown in. Nik came to meet me at 25m, and I was just thinking what a great dive it was, when I broke the surface and proceeded to present the judges with the second most beautiful surface protocol ever. Sadly, it was not one that could be rewarded with a white card: I came up, did not bother to take a breath, started laughing while removing my mask, then gave three OK signs, and said, still laughing: “oh what a beautiful dive”. The second it was out of my mouth, I wanted to take it back, take it back, take it back, and replace it with “I’m ok”, but the reverse-the-time-space-continuum button did not work. Truth is, I was off my head with narcosis, in a very happy kind of way. I simply blurted out the last thing that was in my mind before I surfaced. Tomorrow I am going to repeat ImokImokImokImok the whole way up. In fact, I might start saying it to myself in my sleep later tonight. I guess I have had my training dive now, so all should go swimmingly. Benny gave me a radioactive sports recovery thingy to drink, itwas so vile, it has to be good. I think I am now glowing in the dark though - see below: 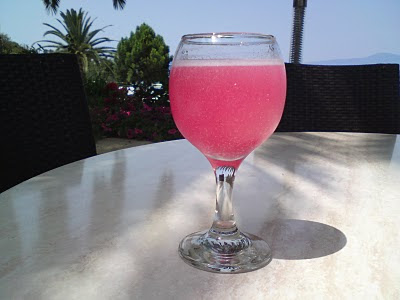 Now then, time to report some news and gossip from the competition. If mine was the second best SP ever, Stavros has the winning ticket. True to his superhero reputation, he went to quickly do a no limits record one morning, with 150m. The footage from the bottom camera shows him touching down, inflating the liftbag and on his way up in a matter of seconds. He was definitely fine. Then something happened on the way up, and he beat even me in terms of narcosis. The surface camera video is a thing of beauty: you see him come up, but then he stops to do a somersault just below the surface, which he has no recollection of. He then pops up, removes his goggles, points and shoots at the camera guy, and simply swims away! All the while he manages to look terribly cool and manly and in control. He will go again tomorrow, too, so we’ll see what new things we can come up with between the two of us. Other than that, we have had a great variable record from Benny, who unlike me, did a 100m training dive and then went on to get it white carded a day later. 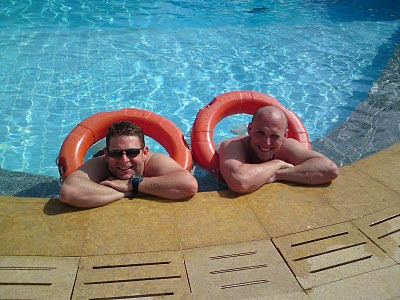 Tim and Benny before the rubber ring challenge - don't ask

We have had to great days of competition, too, Guillaume just got a 110m dive out of the way on the first day, even more amazing as he was playing catch me with the tag down there, which he picked up and let float away several times before taking it back to the surface. Johan has amazed everyone by just going down to 65m without fins in the second attempt today, so the Swedish record is looking shaky. There are definitely small horns growing out of forehead by now. I had announced 58m free immersion yesterday, but decided to bail when my ears hurt and squeaked during my warm ups, since I want to save them for tomorrow. Instead, I coached lots of people, including Kerian Hibbs, who is looking great in a blue seventy suit he designed himself – we call it the superman suit, since it seems as soon as he puts it on he can do no wrong. Today he squared up to Guillaume – they both announced 70m no fins. Kerina went first, and I watched him sprint down off the surface and back up again without ever slowing down. He says he saw stars all the way up (more narcosis - the theme of the week!), but his superman powers kept him safe. Guillaume made it, too, around 30sec slower. He said he looked up from 20m, and was not sure how he was going to make it back, as there was nothing left in his arms, but he was laughing because the breath hold itself was still so easy. Jakob arrived the night before the comp, and went straight out to set a new Danish free immersion record with 75m, he said he laughed all the way up because it was so easy. Mark Harris from the UK also set a national record with 70m FIM; he went out to do his trademark constant weight with bifins dive today, 70m again, in ancient C4’s. We are all convinced that given a decent pair of fins, or, oh my god, a monofin, he would hit surprising depths. We love having his wife (well...) Laura here, since she just goes around and quietly takes lovely pictures that make us look like athletes, rather than a bunch of weirdos who exist on a diet of bananas and burp a lot. I also had the joy to coach Will today, who went down to 97m to grab the continental FIM record, with a loooong dive time, also dropping and catching the tag. Really guys, get it together!

Alright, there is lots more, but I have to go to bed, I promise more stories once I have the white card business out of the way. In our spare time, we have rubber ring wrestling matches in the pool, amongst other things. It’s lovely.