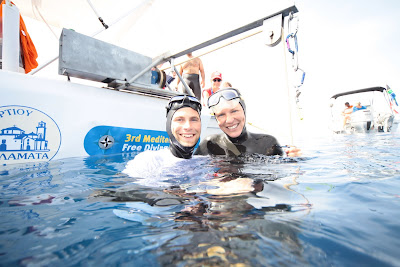 Now that I have the big dive out of the way, I have gone into holiday mode. The day after my record, I went out on the first boat, to open my coaching business, and spent all day bobbing in the waves and pressing my services on various people. A coaching success was Johan, who wasted no time in declaring the Swedish no fins record with 68m. He looked strong until he reached the surface, then he looked like he needed my help, so I yelled. He pointed out later that we have now given each other a national record, which I think is rather lovely. I was also able to help out Kerian, who had announced 80m FIM, with his pb being 60m. This was the first time I saw him a look a bit nervous. He had come up with an amazingly clever plan for getting comfortable on the dive. Turning at the bottom at 80m, he was going to start swimming up no fins until he felt good and got settled, then he was going to begin pulling. Have you ever heard such a thing? I felt it was my duty as a coach to cure him of his temporary insanity, so I looked at him as sternly as I could and said: no you’re not. You are not going to swim. You are going to pull. You are going to like it. He looked a bit surprised but gave in without discussion and had a lovely dive. I believe a combination of this and the superman suit has made him feel very brave, so he has declared 101m for tomorrow. I would like to remind you that his pb of a few days ago is 90m. Balls of steel, said a fellow diver. I believe it will be my job to look after this one again. Can’t wait! 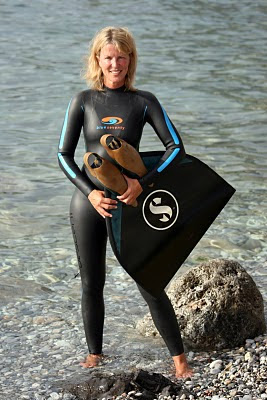 Good thing is, since I have pretended to have a share in getting Kerian to do good dives, he has put a word in for me with blue seventy, and I am now the proud owner of prototype superhero suit, see above. If this makes my diving go the same way Kerian’s has gone, it will be quite brilliant! It looks good in pictures, too, which is obviously the most important thing of all. Guillaume has announced 118m for tomorrow, which will be a pb for him. I reckon it will be an easy dive – I saw him surface laughing after 114m. Superheroes wherever you look, I tell you. 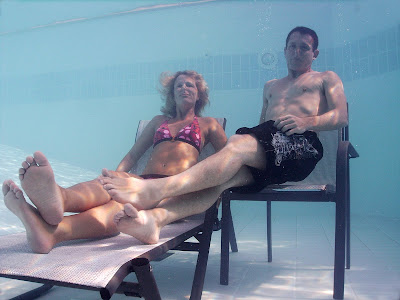 Of course we freedivers have a lot of downtime, and we never seem to run out of silly things to get up to. The other day a crowd of us had gathered around the pool, when safety stud Daan accidentally (well...) fell into the pool with one of the sun loungers. More furniture soon followed, and instant fun was had by all, diving down to have our picture taken by Laura. Problem was, the owner of the hotel was actually swimming in the pool himself, and although we made a vague effort at being discreet, he eventually realized that we had sent his chairs to the bottom and proceeded to have sense of humour failure, in Greek, at whole bunch of freedivers, who sat on the side of the pool, a picture of innocence. We have decided that the guy is the Greek answer to Basil Fawlty, wandering around the place, ready to pounce on people when they least expect it. The photo shoot was followed by a pack-a- much-as-you-can- and-then-check-how-floaty-you-are- competition, which was won hands down by George. She still floats with two neckweights on. Amazing.

We have a special sleep study going on here, so random athletes have been getting all wired up. It was Livy’s turn the other night. Check her out: 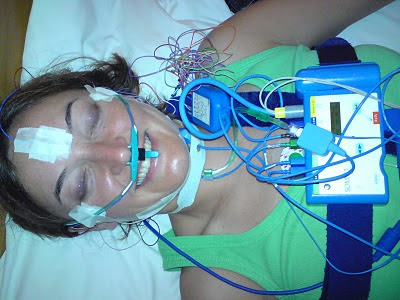 I believe this is a very clever study indeed. They wire you up like that to check for sleep disturbances, thus making sure that you will effectively be getting NO sleep at all. We could not stop laughing when we saw Liv, and immediately started to make up lots of ways to mess with her. The highlight came when she told us to cut it out and be quiet, since the thing strapped to her chest was recording sound, to check for snoring, and movement. Tim and I were busy bouncing up and down on her bed and knocking the headboard against the wall within seconds, to see if we could make the scientist think she had had wired up robot sex. In between making grunts and groans we did give the game away by succumbing to fits of the giggles. Not sure what the scientist will make of this one.

Today was a rest day, so when the guys from the south African film crew offered to buy me a beer last night as I wondered into reception to try and write my blog, I decided it was time for my 100m beer. Little did I realize that the moment I took the first sip, I would be lost. Somehow, I ended up on the top of the cliff behind the hotel, dressed in flip flops and torn denim shorts, with a bunch of guys in equally shabby attire, entering the swishest bar around, full of women clad in high heels and mini dresses. I felt distinctly underdressed, which did not stop us from drinking beer and tequila and dance about merrily until five in the morning. I survived by tossing one tequila off the cliff, hiding one behind a flower pot, pouring one into someone else’s glass, and ditching one under the table. One of our guys removed his shoes and then went to sleep in the bar, one showed the most amazing dance moves to the locals, and one fell asleep in the corridor outside judge Ute’s room because his key card did not work and he failed to navigate his way back down to reception. All in all, a brilliant night, followed by an adequately painful hangover. I’m a little nervous about tomorrow night’s party. Help! Anyone out there to look after me? Please?