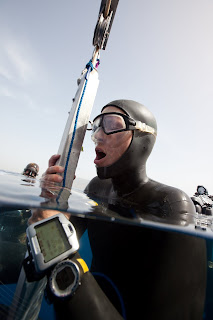 This morning, I was definitely back on track in terms of nerves – I had a hard time forcing down my porridge breakfast at 7:30am. Fred sat at the table with me, and heard a big sigh – oh come on, he said, looking at me all surprised. The nerves are not actually fear of the dive, it is just that I want to make it so badly, it makes me nervous to think that I might mess it up. Having listened to jokes along the lines of have a beautiful dive, did you have a beautiful dinner, and such things, I had asked Jakob to come out with me to calm me down and coach me. His job was to yell at me at the surface and get me to focus. As we sat in the dry boat, he told me quite sternly: Anna, you are not going to be happy and smiley when you come up. You are going to be grumpy and serious until you have seen the white card. I just nodded and said: ok. Ok. OK! He then went on to promise me a coffee for after the dive, which got me very excited, I tell you. Coffeeeeeeee!

Stavros went first, and someone should do a study of what the man eats for breakfast. First he was doing safety all day yesterday, then he went out early to set up the sled for his own record, then he just popped down to 150m and came up easy as you like. He was fully focused and said “I AM OK” very seriously when he surfaced, then let out a huge roar when the judges showed him the white card. Natalia was up next, having announced a variable weight world record with 125m. She has been trying out various combinations of mask, no mask but noseclip, fluid goggles with noseclip, fluid goggles without noseclip. This is the option she went for in the end, just holding her nose. I have not seen that before, but it seemed to work for her. She also took five kilos of weight off the sled, and went down with 15kg instead of twenty, which slowed her down a lot and made equalisation much easier. She got down and back fine, and has added yet another WR to her name. Doesn’t look like she’ll be stopping anytime soon. 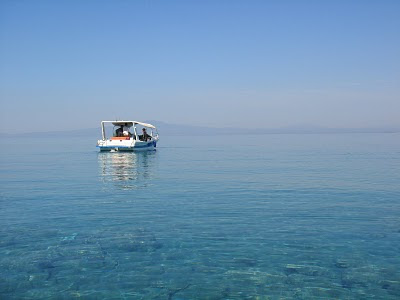 I was next to go, and had an easy time breathing up with the sea once again flat calm. While visualising my dive, I focused on things such as equalising my mask before taking the mouthfill, which I did as soon as I released the brake – unfortunately, I was a bit too zealous and released a nice big puff of air into the sea. The second one escaped me when I overfilled my mouth and could not hold the air in anymore ( last time I checked, my hair was still blond). I could feel a cramp coming on at around sixty meters, which distracted me so much, I nearly lost my mouthfill, so equalisation was very complicated and I had to put a good long stop in at 82m. Finally the left ear cleared, and I dropped down to the bottom. 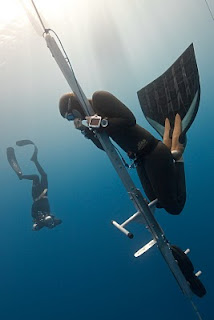 Getting off the sled, I was starting to think about what I needed to do, instead of just being excessively pleased with myself, which worked much better and kept narcosis at bay. I had a harder swim up this time, due to the longer stop, but Daan met me at 25m, and it always just wonderful to be in the hands of people you know will keep you 100% safe. Jakob did a good job telling me what to do on the surface, and I was all serious and said “I AM OK” instead of going on about how lovely the dive was, so Giota and Ute were finally able to give me my white card. Rarely have I been so pleased with anything. It was amazing, and I have to say thank you to the fantastic safety team, who just take care of everything and give you the freedom to go all out and do dives like that. Wonderful, guys, thank you thank you thank you! 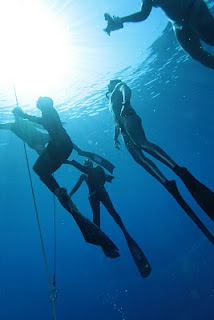 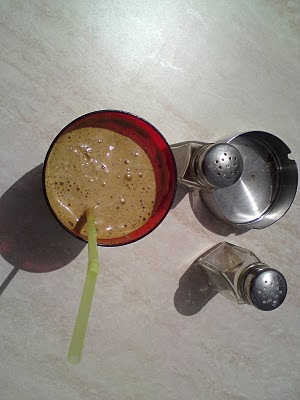 Benny went right after me, and did a sweet and easy no limits dive to 105, another Australian record, so we rounded off the sled morning perfectly, with everyone back happy and well. I went to sit down by the beach after a quick shower, and was busy texting everybody, when coach Jakob came and rounded off the morning by bringing me a huge portion of the most fantastic chocolate ice cream. 100m ice cream – nothing tastes quite like it. I added the final touch with iced coffee after lunch, and am now feeling full, tired and as pleased as punch. Tomorrow I am having a day rest, and will be out to coach anyone who puts their hand up. So far, I have Kerian, who is not wasting anytime and has announced 90m constant weight, when his previous pb is 82. I like it, but am quietly getting ready to yell a lot when he comes up. He is followed by Jakob with 90m, too, then Will, with 87 no fins, a big dive I am excited to see. Next one is Niki from New Zealand, who has been doing brilliant no fins dives, in fact, she did 57m in training and is going for 59m tomorrow, pretty exciting with the world record being 62m and two more competition days to go. I am very happy to coach her, and will be sending my best good-dive vibes when she leaves the surface. She is followed by George, with 48m constant weight, and then Liv, who had a strong 60m swim with her fin yesterday and is going for 44m without fins tomorrow.

So that’s six so far. I’m sure I will pick up some strays when I am out there. I wonder if I could announce a world record in coaching the most athletes in one morning?