Freediving competitions are a unique universe all to themselves. Being able to immerse fully in the bubble is crucial to success, but it can also bring on cabin fever and finding a steady training and competition rhythm while escaping the frenzy is a fine line that is not easy to walk. Vertical Blue is special in the way it is laid out: athletes get to do six competition dives spaced out over 11 days, making it an incredibly long event. It was created to be used as a chance to set records or achieve personal bests, outside of the big competitions like world championships, where there is only one chance to perform and announcements are often tactical, playing for medals.

My plan was to improve my no fins diving and hopefully achieve some personal bests in this discipline, which, if done in competition, would also be German records. Coach Andrea as well as my freediving buddies convinced me to be a pro on day one and go for the very "safe" announcement of 47m - just one meter more than the current German record. This was met with much moaning and tantrums on my part, since my announcement devil was protesting loudly - after all I'd already done 50m in training easily - but the conditions had changed dramatically, with cold weather bringing a significant drop in water temperature and very poor visibility in Dean's Blue hole. Being cold before a dive can have a big impact on how it will turn out, so much as my athlete's soul didn't like it, pulling back was the right decision and gave me an easy start with a little German record to kick me off. Plenty of time to improve it over the next days. After all, I still had five competition dives left - or so I thought!

One thing I keep learning around my freediving events is that nothing ever turns out according to plan. Vertical Blue was no exception, meaning a combination of random things such as our rusty hire car breaking down to make me miss my start time and unexpected illness cost me three out of my six dives. Taking a safe progression into account, this meant I ended up just repeating the dive I'd done in training and moving the German no fins record to a depth of 50m. For someone used to doing personal bests in world championships, this initially felt like a right let-down, but leaving an event with a sense that you have more in you is often a strong positive motivation for an athlete, as it makes you want to go out and discover how much more that 'more' could be. 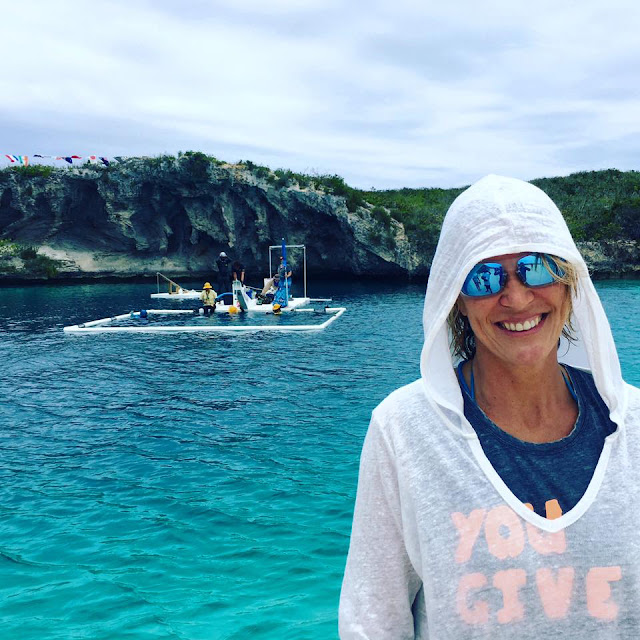 One of my favorite memories from this trip is beating the onset of cabin fever brought about by being forced to give up on a competition dive due to being unwell. Having stared at the contents of our fridge blankly for a while, debating such exciting dinners as jam on toast versus rice crispies, training buddy and housemate Liv Philip and I decided to beat the competition blues by going out to eat burgers in nearby Rowdy Boy's, where we accidentally (really!) ended up getting rather wasted. Three glasses of wine might have been involved.  Having stumbled home through the dark, we continued the evening face down on my bed, crying tears of laughter, due to a discovery that we knew we needed to relate to the rest of the freediving crowd the following day. Fortunately for them, I suspect, neither of us had the slightest recollection of what this revelation might have been when we woke up with a blinding hangover the next morning. Spending the rest day with hourly promises to never even look at wine again exorcised all elements of freediving competition madness sufficiently for me to go and break my record and Liv to get out and equalize past the snot blocking her sinuses, reinforcing our long held belief that sometimes, cutting lose is all that's needed to get you back on track. 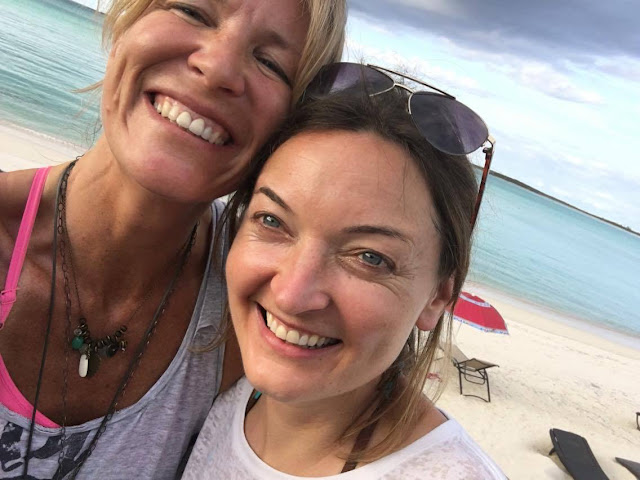 Although it hurts to give up dives due to illness or sketchy conditions, the ability to keep your ego in check is one of the most essential skills an athlete must have. We all hate to dive below what we deem to be our potential and want to be seen to be competitive. Being able to leave this behind is maybe the biggest secret to diving safely and with joy. The blue hole with its unique magic was instant love for me, including the fading light in the lower part that has athletes descending into an eerie darkness. As any environment, it has challenges and changing conditions, and one of the main skills an athlete needs is the ability to judge the impact this will have and to adapt. I find that retaining a sense of wonder through this process has left me with some of my best moments in freediving and it is one of the things I like the most about our sport.

We were well looked after by a great safety crew as well as awesome doctors, and equally nicely saw our performances rated by a team of judges that clearly had their heart in every diver's achievement. In the midst of it all Sayuri Kinoshita became the first Japanese diver to break a world record with 72m no fins, while William Trubridge was on a roll and dived to world record depths in free immersion twice, granting this event media attention from around the world. For me, my first vertical blue was a magical trip peppered with challenges as well as success. Weirdly, it ended as it began: being stranded and having my flights canceled due to a storm in Miami! What are the chances? Next time I go to Long Island, I am taking a boat!

Back home, it is always comforting to find that my support crew is on common ground. Where sportsdoc advised me it was time to start doing some "real" weights before I left, evil coach Andrea Zuccari commented on my new German record in no fins by telling me I was diving "at least ten meters too shallow". Having returned to Berlin after a three day travel nightmare and a five week break from hard exercise, I went back to my Crossfit gym, where coach Sebastian Werner needed only a minute to tell me to "stop crying and get the heavier kettle bell". I hope these three never meet - the result would likely kill me!

Maybe I should take up a new sport for a while. I wonder if there is a cake-eating-contest somewhere near me?

William Jessie said…
I'm really inspired together with your writing skills and also with the layout for your weblog. Thanks for sharing this blog here. Cavern Diving Tulum
9 January 2021 at 21:45