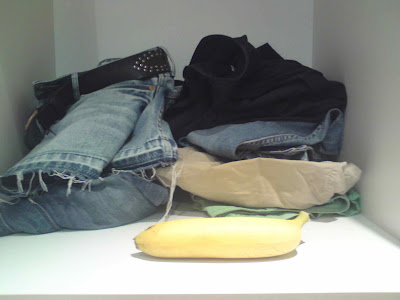 You might ask what a banana is doing in my wardrobe, and I suppose that is an entirely fair question. Let me explain. I have been attacked by cramps in random body parts over the last few days. Apart from the usual leg thing, I am capable of getting a cramp in the oddest places, such as the intercostal muscles in my back when taking a mouthfill. Hence I have been stocking up on bananas with the firm intention of consuming one of those with my porridge every morning. Problem is, after several deep dives, I am now also afflicted by a severe case of freediving brain, and have left the bananas behind in my room every single day. Blond girl solution: put banana next to slouchy breakfast pants, hence impossible to forget. It worked! Fred Buyle, our freediving photographer (see his images of the WC at www.nektos.net), who has been doing around ninety dives a day taking pictures, thus erasing 95% of memory storage cells from his head, now has a packet of green tea residing next to his morning shorts.

The last couple of training days before the comp were kind of weird. Saturday was simply wild, with rough conditions and 120 athletes trying to find out where exactly their limit might be. Alexey Molchanov did a good job on that one, doing an 80m no fins dive the one day and then asking for the rope to be set to 122m the next. Turns out the rope was only 121m long, which was plenty, as he went there easily but checked out in around 10m on the way up. He said he was a bit tired from the day before. No kidding! He is very strong this year and joined me today in having a coaching day, and we both shared a moment of pleasure at not having to dive.

Just when I had convinced myself that after the 70m I was done with all my training and almost on holiday, I was tricked into doing another deep dive by judge Linda, who came to share my warm up rope and then, when I wanted to go back to have coffee, said: "why don't you just go on the line and turn early". She knew perfectly well that my brain is simply not wired for early turns. I got lulled into agreeing by the lovely weather, and before I knew what happened, I touched down at 73m, swam up rather easily and celebrated with two coffees afterwards. 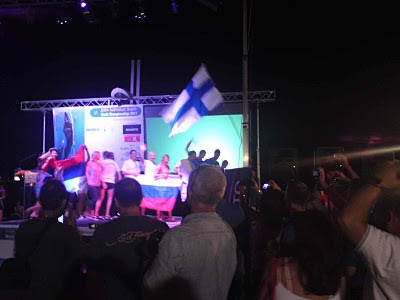 Opening ceremony was the usual stuff, waiting around, then waving flags, then running away as quickly as possible. I took coaching bookings and picked up Will Winram, with an announcement of 88m, finnish giant Antero Joki with 70m, no fins prodigy Jody Fisher with 56m (we will start to feed her wrong information to slow her down) favorite UK tough guy Dave Tranfield with 58m, and Ilka with 35m. This list meant I was out on the first boat and back on the last. Rest day, anyone? I had high hopes for my deepest diver Will, but when the sonar guy shouted "early turn", I had to defect there and then - I will only hang around for people who make their depth, since I cannot waste my expert services on yellow cards. Truth is, I only had a few minutes until it was Antero's turn, so sped off to distract him from nerves and rescue his neck pillow floatation device situation: the thing conveniently burst just as he reached the line, leaving me to hold his head during breathe up. Nice to be useful.

All was well, he took his time on the way down, making the judges a bit fidgety, but nothing was going to stop him from reaching the plate today. Just as he was on his way up, I got elbowed out of the way by a large man in a black wetsuit, who tried to jump past me into the competition zone, shouting: can we get on the line? Well. That's what he thought, but he had the wrong girls on this one. I grabbed his arm and yanked him back, while Linda gave him the you-are-dead-if-you-touch-my-rope look. I told him to go away, which appeared to surprise him. Duh! If a guy on the boat is shouting out depth and everyone is looking down, in a DIVING competition, is usually because someone is DIVING! Imagine! What a concept! Anyhow, he wasn't going to get past me, and Antero finished with a white card and a new Finnish record, which pleased him as much as his coach - see him below looking smug next to the enormous Finnish flag. 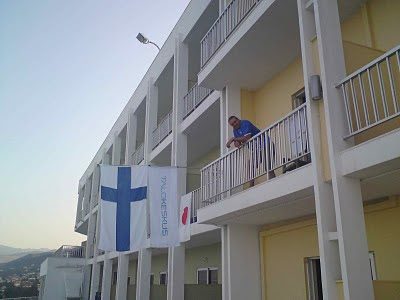 While I was busy looking after my charges, someone removed my bright green pool noodle from the dry area boat. I am shocked and hurt by this act of sabotage and went round the rest of afternoon, chasing people with green noodles, convinced that they must be the evil noodle kidnappers, but it has not turned up. Whoever the noodle thief is, he best be aware that bad noodle karma will follow him for the rest of his freediving days, making him mess up all of his duck dives in the future. 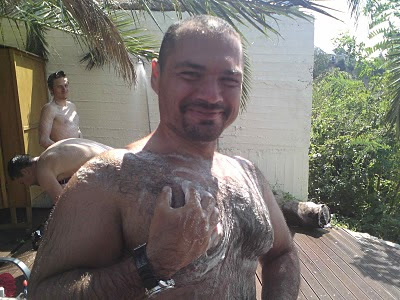 The safety guys felt like they had a day off - see above, wasting time soaping themselves - since most freedivers are sissys (much like me) or non swimmers (again, like me) and so don't do the no fins thing, hence there were only sixty competitors out there today. The calm will be over tomorrow, when 100 crazed athletes will head to the ropes to push their constant weight dives again, as no one knows what on earth to announce for Thursday. Psychological warfare is on everywhere, and the announcement game has started, with people hiding their depths while trying to spy on the competition. Me, I of course know everything - just a question of the right sources - so I will sell information to the highest bidder and finance my beers at the final party this way.