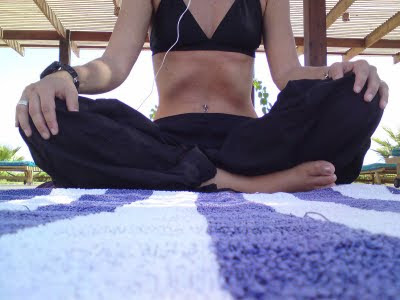 I sat around in Sharm for two whole weeks, without diving. On some days, I was allowed to come to the center and do my (now daily - it's too strange) pathetic attempts at breathing exercises there, see above. On other days, Marco simply locked me in the apartment as even the heat was giving me terrible headaches. In the evenings, I was fed lovingly by my Italians - see below an amazing amount of homemade gnocchi which we polished off in no time - but nothing was helping so by the end of week two, I was on all the drugs I could get my hands on and ready to switch sport. 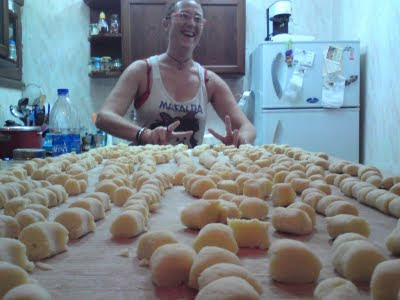 A final attempt to do a dive on Saturday was thwarted by a freak current, which had me flying away horizontally with the line while I was down there doing a rather nice hang. Even Luda, the barracuda, looked surprised. I was contemplating a career in competitive knitting, but thought it might be fun to go to the worlds for the party, so I boarded the plane to Kalamata in the end. Considering my aquaintance with Murphy over the last months, getting stuck in Cairo for four hours, missing my connecting flight in Athens and having to spend hours on a bus did not come as a surprise anymore, I tell you. 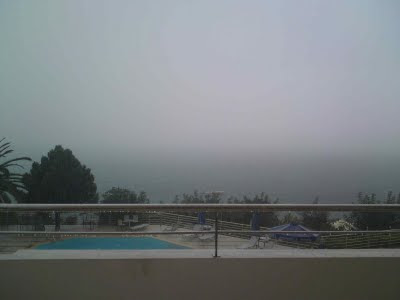 First thing we had in Kalamata was a beautiful thunder storm! Waking up to catch the Zodiac taxi out to the training zone was lovely and I felt happy and had my motivation back. Stavros has built a waterworld style island for us to dive from, plus we have three dry area boats and six warm up lines in the water. The whole thing is around 1.4km out in the middle of the Messinian bay, so it really feels like you are floating around at sea, but the water is flat calm. Perfect.

More athletes are arriving by the day, and every evening we have the ritual sign up brawl. It's first come, first serve for your training slot, but since everyone comes early, it's elbows out and every man/woman for him/herself when Stavros pulls the list out of his bag. The poor man has another 100 Athletes arriving by next week, and another three weeks of this to go. I wonder if we will manage to break him this year? 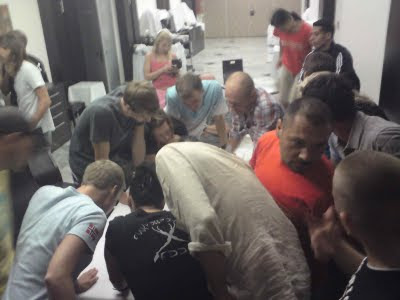 I have been out to dive twice, and briefly contemplated taking it easy, especially since warm ups were ugly. But then I do not have time to waste any more, so instead of messing around I did a 50m and a 60m constant weight dive. They were not beautiful, but completely fine, and although I still get a headache for hours afterwards, at least I can equalize! I keep looking around for surprises that Murphy might have in store for me, but it appears that he has been taken over by Jodie from Australia, so I can focus on moving ahead - thanks Jodie!

Fingers crossed! Am putting the chocolate and the knitting needles away for now. Day off today, so plenty of time to get funky ideas into my head...

FDD said…
it is GNOCCHI anna, not GNOCCI! gosh, why everybody always need to violate this poor language? just call it noodles, that's the only word the english could invent for any kind of pasta!
8 September 2011 at 10:41

Anna said…
hehehe!!!! SOOOOOOORRRYYY - is just me unable to type on keyboard. Honest!!! Changing it RIGHT NOW and apaologize many times to the gods of Italian food.

See you soon! And tell you what: get ready for this place - is worse than Eygpt - the taxi drivers ARE ON STRIKE, possibly the whole month!
9 September 2011 at 12:51