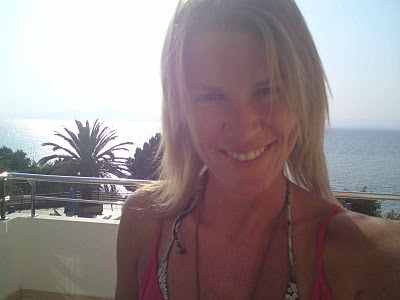 Right, moving along nicely - after the 50m and the 60m dive, I continued in "not-messing-about" mode and went for 70m next. Much to my surprise, I went there, only needing to equalize once before the bottom. I might not like to say this, since he has been impossible, trouble, and bossy recently, but boss-instructor Andrea Zuccari is directly responsible for this result. Thanks! But I hate you! I do! Impossible! 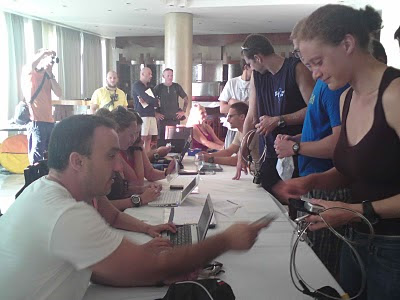 The hotel is packed with freedivers, doing yoga everywhere, demanding weird foods, and being generally freediving athletes. Yesterday we had official registration for the worlds, and 150 sweaty athletes stood in line to get their lanyards destroyed by judge Grant - see below. If your lanyards survives that one, it will be good for sure, believe me. Not all of them did, though, and I squeezed my eyes shut tightly and said a little prayer while mine got pulled in all directions. It held! Hurrah! Ken from Denmark had a clever business idea and set up a little lanyard fixing station in one corner of the room, so various bits were stuck together again and all was well. 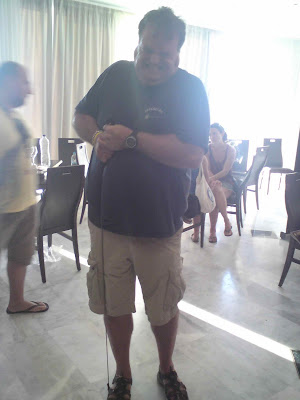 We have had three days of competition: the mediterranean freediving cup, held directly before the worlds as a kind of practice run. On day two, it got well rough early on, and with 68 athletes out to dive, the dry area pedalo boats got seriously overloaded, and two of them did the titanic thing, tilting slowly and then finally heading to the abyss, with freedivers jumping off into the waves. When the poor safety crew came to the rescue and tried to tow them away, the zodiac nearly sank, too! All going well for organizer Stavros, who is existing on his diet of ham and eggs. Note the token healthy apple in the picture - must be what keeps him going...or is it the hugs he gets from all the girls? We still have not given up hope that he will let us clamber up onto his waterworld plattform/island, but he is being very hard and mean about this. Sniff. 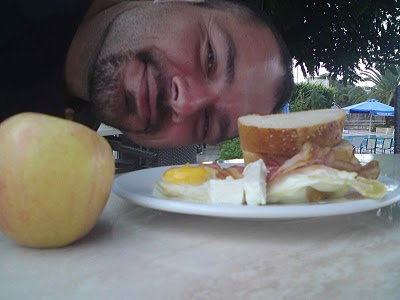 Divers here are mostly amazingly deep, there are totally unheard of people left right and center going to 100m and more. Women are in the eighties - it's impressive and fun. People are pushing themselves, too, so there have been some black outs and the scooter rescue pioneered at Only One in Sharm is in good use for deep safety here. I hit my 70m dive in the med cup, so it is now a clean and clear new German CW record, which I am well pleased with - something is working. Sergio Martinez Alvarez took the mens German CW record with 83m, impressing the freediving community and leaving the German team proud to have such a great new depth competitor among us. More to come from that diver!

News and gossip will be up regularily over the next week. I have bailed from the no fins competition, so will be taking bookings for coaching, thus being able to see all the fun first hand. Since I am much in demand, I will only accept divers who look the part, which unfortunalety means Johan from Sweden, whom I enjoyed coaching to a Swedish record last year, is out of favour, since he is sporting a monofin with pink (!) footpockets.

Can't have that, now. I have a reputation to lose, after all.