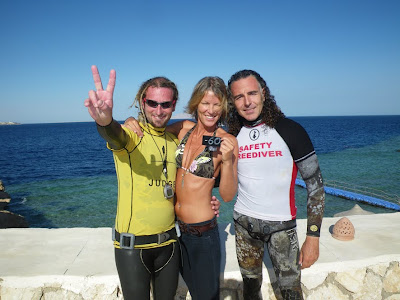 A few hours after my last blog entry, I was on my way down to the blue jetty, ready to start my warm-ups for the record dive. I had one blissful day about a week ago, when my hangs were suddenly beautiful and I thought my adaptation was back. This effect has gone into reverse almost imediately, and all warm-ups are now as bad as ever. Fortunately, I have never allowed such a minor detail to distract me from my dive. It all went beautifully well, the only hick-up were contractions on the way down, which are plain disgusting, but never mind, I equalized at the bottom, took the tag, made my way back up, and was very happy to be shown a white card by Marco, who was in judge mode - see below, together with judge Paola and Andrea, who was safety slave for the day. 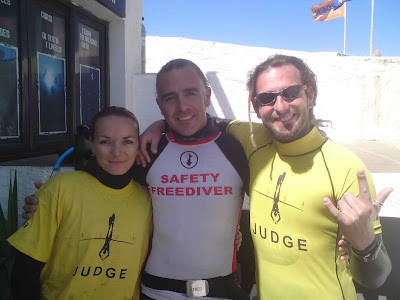 Marco has been moaning that we forced him to organize a competition, but the truth is, he needs the practice and the judge points - he even got to judge us in the pool, where Will went and just blasted out a continental record with a 175m dynamic no fins. I bailed early on my dynamic, at a mere 117m, feeling kind of tingely and weird. I supressed the little Anna-devil in my head that likes to come out at such moments, and played it safe for a change. Anyway. See something wrong with the picture below? Yes? There is a beautiful blue sea behind me, but I am wearing my POOL suit!! 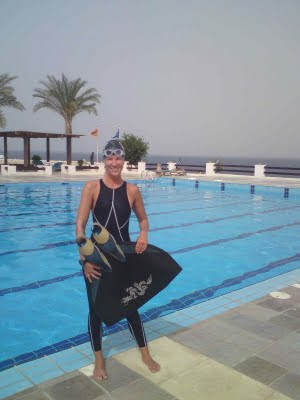 The devil was also giving me some ideas of announcing 42m no fins depth, to beat my current record, but I reined it in and announced 32m instead, which I will probably never live down - the visibilty was so beautiful, the guys could safety me from the surface! Having said that, Andrea the boss instrcutor and safety slave can be quiet, since he let slip today that he announced 45m CONSTANT WEIGHT in a competition two years ago, which must be something like 25m off his pb. Anyway, he continued in bossy mode and cancelled my well deserved (I did a NO FINS dive, after all, how horrible!) day off tomorrow, and will put me back on the no limits sled.