I am back on the sled - double thanks god, as Marco would say, I can stop that swimming down business and have fun for a bit. Boss instructor decided to send me to 100m yesterday, which almost worked, only I stopped at 96m. Then it was time for a party: all Italians living in Sharm meet at a beach bar every Tuesday and dance about madly. This was not the kind of training Andrea had in mind for me, but I was stubborn and went off with Paola, having promised not to drink, or not too drink a lot, in any case. Which I didn't, only somehow the following foto: 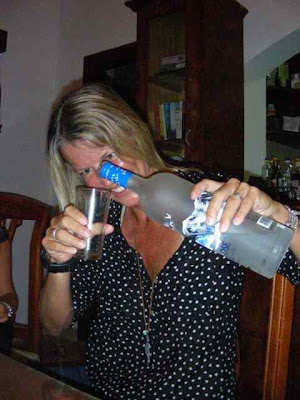 emailed to the dive center the next morning meant I had some explaining to do, such as: I was only pouring the Vodka for someone else! This afternoon, my two instructors were debating if I was suffering from lack of sleep (home at 3 am), apnea brain, or blondness. They concluded that they could not give me more than one thing to think about during my sled dives today, because I was too blond to cope with the information overload. This made them laugh a lot. Charming! Anyways, it is a little hard to defend myself from such accusations, when I have just had a very special moment. The other night, while Tyler was out and Will and I were cleaning up around the house, I stepped out behind him on the way to the rubbish bin and - ooops - the door fell shut. Will was barefoot and bare chested, while I was barefoot and in my sleeping outfit, which consists of a pair of black hotpants and a black bra top. So there we were, in the middle of Hadaba, amongst the stray cats, stray dogs and stray taxi drivers, at 11pm, me in my underwear, Will semi dressed. Fortunately, the amazingly patient Paola who lives upstairs with Marco just smiled sweetly and handed us the spare key. She has had a lot of practice with freediving brain afflicted athletes, and nothing can faze her anymore.

Tomorrow is a rest day, Friday static competition. My static has gone from bad to worse. My solution for this problem is: stop eating until it's done. I'll report back on success/failure of this program. If I have not wasted away, that is.