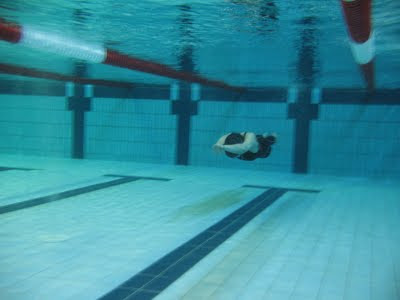 Seriously. I think I am growing green hair, produced entirely out of Chlorine. Since I returned from Greece, I have been a very good freediver and followed a well prepared, regular training plan. The only thing wrong with it, to my mind, is the lack of open water. The reason behind it was the brief panic that seized me when I came home and realized there were only five weeks left till the pool world championships in Denmark. Fortunately, Elisabeth Kristoffersen was in Berlin for a whole month, staying with Martin, and ready to get going. We discussed said training plan over dinner, and ended up with the following: Monday rest, Tuesday dynamic, Wednesday static and dynamic no fins, Thursday dynamic, Friday rest, Saturday no fins, Sunday morning static, Sunday evening the evil interval training spinning class, with breath holds on the bike.

Thinking that I was well trained and adapted after all, and expecting to be pretty much where I left off after my record attempt, I hit the pool with Elisabeth for our first session. It was a shock. It appears that deep diving broke my pool diving. My body didn’t remember a thing. Swimming with the fin felt awful, being in the pool felt awful, holding my breath felt awful, doing a decent turn was impossible. Five weeks seemed like a very short time. The week did not improve, in fact the low point was yet to come when I came up at barely four minutes in the first static session, having started contractions at around two minutes. I blame it on Jesper. While I was floating there, trying to drift off and relax, I was suddenly thinking about his advice for static: that you have to love the horrible feeling and welcome the fight. Merely thinking about the horrible feeling obviously ended any ideas of relaxation for me. At least things were not much better for Elisabeth either, so we had the comfort of moaning together afterwards in the showers, which is the real reason why Martin has to wait so long for us girls to be ready.

My initial plan had been to start off with a max in each discipline, but considering my disastrous performances, I decided to leave it be and focus on doing several long, but sub-max dives, trying to recover a shred of technique. In DNF I was sometimes using 3.5 strokes, sometimes four, sometimes 4.5, sometimes five! It was chaos, to say the least. As we got into the second week, both Elisabeth and I decided that the time for messing around was now over and we would focus properly. To do this, we got into the habit of telling each other what our minimum dive was going to be that day. This seems to work very well, at least for me. As soon as I have announced to someone that I am going to do, say two times 100m, I then feel embarrassed enough not to quit. I surprised Martin, who was on safety duty, when we went to train no fins one day: I had told Elisabeth in the changing room that the target was to turn at 75m. Martin was expecting me to do a shortish warm-up dive, but when I was swimming along, I just wanted it all to be over so badly, I went to 84m straight away. This was interesting in some way, as I realized that I could do a fairly long dive without warm-up.

Having got our heads back together, training progressed a lot better into the third week, with some tough cycling on Sunday evenings thrown in – lots of contractions included. The guys in the spinning class are used to us by know, and ignore us when we shout “five, four, three, two, one...!” at each other. Both of us have found that we get extremely lactic on the bike, but it has been getting better every session, so we hope it is good for something. It has to be. Right?

In the pool I was focusing on doing longer and longer dives with no warm up. I am finding that this is building my confidence very much: if I can do 100m no fins after swimming, with no count down or proper breathe-up (and a pb of 113m), it seems to me that more must be possible with good preparation. Meanwhile, Elisabeth was working on her main problem: she lets herself quit sometimes. I think she has definitely fixed this, and did some beautiful dynamics, very much ready for more in Aarhus. It was her final week here last week, and I had planned to go for maxes in DYN and DNF. We took proper rest and set out to do the dives on Tuesday. Waking up in the morning, I had one feeling: I don’t want to go. This was a lot worse than usual, and when we arrived at the pool, I decided not to dive for the first time. It felt strange. I was feeling physically weak, and neither physically or mentally ready to do anything. The plan was to rest for a day and try again on Thursday. Thursday morning came along, I pushed off the wall and immediately felt stressed and tense. Without even realizing it, I was swimming faster than usual, which probably didn’t help matters, as I got lactic legs at 50m and quit at 90m. This was a new and depressing experience for me: so far, I had never quit before reaching the minimum goal I had set myself, no matter how hard it was. This time, though, there was no way I was going to go to 125m and turn. I guess sometimes it is important to know when not to push it, bad as it may feel.

Things have been going surprisingly well in static, of all things. This is mostly due to Martin, who took a new approach to coaching one day and simply tricked me to a pb of 5:27, making me realize that I could fight for over three minutes in the process. Frustrated by my dynamic disaster, I went on to do another pb of 5:41, which pushed Elisabeth to do 5:47, the longest static she has done in a long time. After all, she had to beat me, which just shows that it is great to have a muppet on your heels, chasing you. After some rest over the weekend, I have beaten the dynamic devil and feel that I am back on track. A last max in DNF tomorrow, plus a bit of static training, and I am ready for Aarhus.

Anonymous said…
Great blog its good posting and interesting for me!
[Copenhagen]
5 August 2009 at 09:04