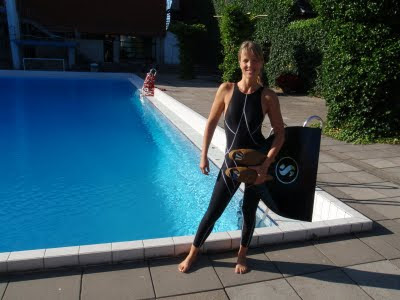 Yesterday we had the pleasure to sleep in, since the dynamic finals were not until four in the afternoon. Having woken up early anyway, I came across Japanese freediver Hanaka wandering around aimlessly on the way to the supermarket – she was in the B-final with me, and couldn’t sit still anymore, either. To give my head something to focus on other than yet another official top, I went over to the pool to watch the end of the CMAS competition. They have been running their world championships alongside ours, which has been very interesting. I arrived in time to see Stig, who has not trained for two years (information confirmed by fellow Aarhus freedivers), do a 238m dive, followed by the surface protocol in less than five seconds. I wonder what he eats for breakfast. He got disqualified, though, because he forgot to drop the little marker CMAS use to check the distance achieved.

As the B-final was approaching, I was feeling less and less like diving, and more and more like having a party. Danish Maria was in a similar state. We both just wanted to have beer, without the diving. We spent the last half hour psyching each other up: Just two more minutes. Then beer. Have to beat x by at least ten meters. Then beer. Or: beer at two minutes to official top? This passed the time until Johan arrived to coach me, and took care to calm down my nerves just the right amount. As soon as I was swimming, I felt good, and even though the noseclip came off again, I swam 164m, beating my record from the day before by ten meters. Even surfacing to see judge Linda, again, with the piss-off card, didn’t bother me anymore. I was at the party.

There was just one small detail to take care of: coaching my training buddy Elisabeth in the A-final. She just swam and swam, towards the end mostly with her arms. Then she came up totally clean at more than 180m, which was amazing and got her into fourth place over all. The atmosphere during the finals was fantastic, everyone cheering and shouting as the eight divers were heading towards the medals. Now that it is all over, I can honestly say that as much as I did not like freediving in the pool, I have enjoyed these world championships enormously. We had some more suffering to go through at a slightly endless awards ceremony, with flags rising to the ceiling while hymns were being played. Since Natalia won three gold medals, we heard the Russian one three times, and it is loooooong! All very moving, but torture for a bunch of freedivers who had not eaten anything since breakfast. This we need to work on next time. Just throw us the medals, then give us food, then beer. This did fortunately follow eventually, and we spent the rest of the night dancing around in gym hall much in the fashion of a school disco, which was kind of cool. In the end, the security guard kicked us out.

A lack of Raki at the party means that I am feeling fine this morning, and will go off in search of the beach in a second. I heard that the sea is around here, somewhere.