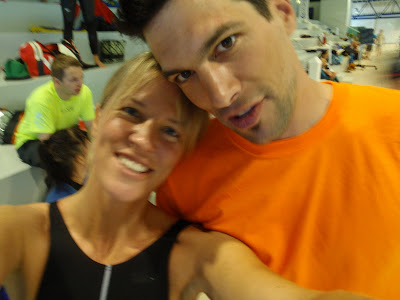 Here is a photo of Daan, who is on safety duty, and me. I have been busy over the last couple of days making sure I was good friends with any safety diver I came across, which turned out to have been more important than I bargained for at around 17:23.

I woke up with a case of nerves so bad that I found it hard to actually eat breakfast and had to force down every bit of porridge. I spent the whole morning going round saying “I’m so nervous, I’m so nervous” to random people, from whom I got varying degrees of sympathy, probably depending on how busy they were being nervous themselves. It was very nice to come across former (trying to get him to un-retire, but no luck so far) top freediver Peter Peterson, who gave me some good advice, although it didn’t help in the end, since as any other stupid athlete (believe me, there a lot of us, just ask judge Linda) I decided not to take it. As I was breathing up for my dive, I started to feel better, though, and as soon as I pushed off the wall the dive was running as smooth as you like. It all felt just as it did two weeks ago, when I did a nice and clean 127m in training. I was kind of aiming for something along those lines, especially since it was looking like 125m was possibly going to get me into the A final. Well. Which self respecting (and blond) athlete would not go for it under those circumstances. Not many, as the many black outs and LMC’s today prove.

Anyway, so there I was, thinking I am still nice and strong when I came up to do the 100m turn. A few meters later, I started feeling a bit odd, but decided (blond) that I was just imagining this and everything just had to be fine. At 115m I changed my mind and came up – about five meters too late. Apparently I reached the surface, took a look and put my face back in the water. It seems that I can’t even blame that one on coach Jesper - I made a crucial mistake by not having a copout ready before the dive. If Linda had been judging me I could have blamed her, since she has been stressing me out by threatening me with red cards, but I had Panagiota, who is one of my favourite judges ever, and was genuinely upset to have to show me anything but a white card.

The positive side to all this is, since I am now not in any final, I will have tomorrow evening off, and don’t have to do this whole no fins thing again. The bad part is that now I have to do a really good static. If anything goes wrong with that, it will definitely be Jesper’s fault, who has been kind enough to offer to coach me and take the blame. Unless I have Linda as my judge, that is, in which case it will all be down to her.

Good. Now I can go to sleep calmly, having all my excuses well prepared and in place, ready to be used as required.

martin_gk said…
Why don't you tell us something about the lovley static dive you did today?