Oh what to announce on the final day 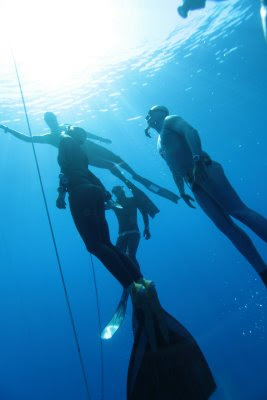 First of all, I instantly have to confess to making a grave mistake, and apologize to my very good friend and longest training buddy Sara. How could I forget? I guess I have been so imersed in the little bubble that is the mediterranean freedving meeting that I have blanked out all previous experiences, and when I mentioned in my last post that the tlc I recieved from the Danes was possibly the best ever preparation for a performance, I neglected to state that it can only ever be a close second to the pedicure I got from my coach Sara just before it was time to warm up for static at the worlds in September. While most athletes were busy streching, yogaing, meditating, and generally being very serious, I got pretty toenails and went on to do a pb. Sorry Sara, it won’t happen again!

I have also been aware that the pictures I have posted previously of top freedivers William Winram and Stavros Kastrinakis have not shown them at their very best. Now I couldn’t leave you with a wrong impression and would like to state that both of them are naturally extremely handsome. Here is a picture, just in case, showing them in top shape: 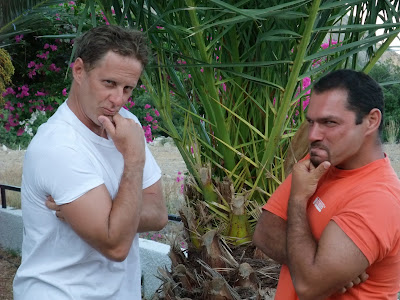 I was out all day today coaching a total of six athletes. It was just like a conveyor belt, one out, one in, with hardly any time to even leave the competition zone. I was more or less a part of the equipment! Things kicked off to a fun start when I went to get the zodiac taxi with Jakob and Jesper, both going out for their 85m dives, and Jesper mentioned that he was feeling almost too relaxed about the whole thing. Clearly, I was facing a totally new coaching challenge here: how to stress the athlete just enough to get him focused? Things such as “It’s a very deep dive” and “it’s definitely going to be a max” might have been said. Aparently it worked, since he once again broke the surface already smiling, closely followed by equally happy Jakob a few minutes later. Maria did an amazing 70m dive, but all my yelling did not induce her to remove her noseclip, so she has collected a red card but is having another go tomorrow. Will Winram turned early, tired, so I just ignored him when he came up. I am too busy to waste my valuable coaching time, after all. The challenge of the day was Christian, who had gone off to visit the fourth dimension and it took me shouting at him for 13 seconds to get him back to planet earth and through the surface protocol. In the end, he listened, and collected a white card for a 58m no fins dive, which has qualified him for the worlds in the Bahamas.

After all that drama, I was suddenly feeling very tired and decided to go off to sleep for a few hours, to ponder my anouncement options in my dreams. The moment I was on my bed, I was wide awake, with lots of interesting ideas going through my head. This I kept up for three hours, until I had only minutes left to announce, when I felt so stressed I quickly wrote down sixty meters constant weight and handed it in before I could change my mind. I encountered the Danish team outside the organizers room, and I know I have been going on about them, but really, this is getting to be quite fun: the gentleman’s agreement is still firmly in place, and both Jesper and Jakob have announced 91m, a Danish record! Even William (who is going for 77m no fins again) was impressed, to the point of threatening to buy them both a whisky if they did those dives. I can already see where the party tomorrow night is headed.

With such go for broke dives to do tomorrow the two boys (I’m not convinced one could call them men) deserved some tlc themsleves tonight, so were treated to a massage in turn. Let there be no excuses! I will be out there to coach them and a whole host of other lonely freedivers, so I will be able to report back firsthand from all the action. This will hopefully include a positive result from Johan, who is having another go at breaking the hundred meter curse. Maybe he needs stressing out a bit before the dive, like Jesper? I shall find out and offer my assistance. Now it is very late, and I should be sleeping, so I will leave you to ponder more important things and report back from our little freediving universe tomorrow.