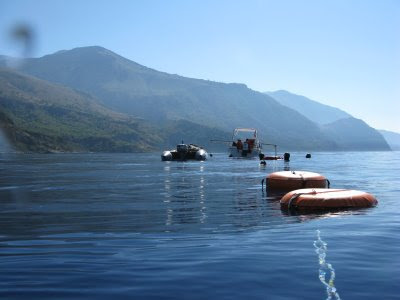 As promised, all the boring news of x-meters done by champion freedivers is now done, and I am ready to come to the real stories. As soon as the last diver was back on shore on Saturday, beers were cracked open as the party season began more or less right away. That evening, we all gathered at the all to familiar Lotos Bar, where things turned out quite mellow, since we managed to hide from the evil Raki-wielding safety divers by going to sit next to the beach. 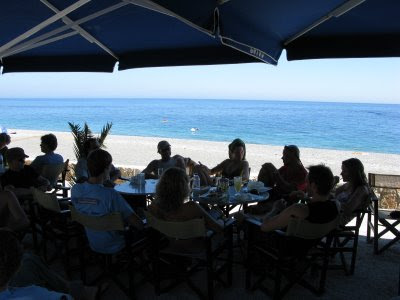 Still, although there was no singing and dancing going on, before we knew it, it was three in the morning and somehow we were on our way to the nightclub Fortuna. There we encountered said safety team, who, since they couldn’t find us, had drunk all the Raki themselves and were in an amazing state of intoxication. This was a bit interesting, since Stavros was planning to do a no limits record attempt to 140m the next day, and had gone to bed early. Now his crew did not look like they would be good for much. In fact Andy, chief safety diver, said to me: “Aaannna. You wille come tomorrowe, you makee the safeety for Stavros, yes? I thinke is maybe better. I wille be on the boat, makee the countedown, withe beer in my hand, yes!!” Somehow, this did not inspire me with confidence. I had planned to stay reasonably sober, but more beers just kept appearing and before I knew it, the sun was rising and it was six o’clock. Back in bed, I slept for all of two hours, before waking up in search of a breaksfast of orange juice, more orange juice, and then some orange juice. Plus coffee.

More slightly ill looking feedivers appeared throughout the morning, but Stavros' safety crew stayed in a coma for most of the day, making any record attempts quite impossible. I went back to Lissos (a secluded beach an hour’s hike away, which we visited on a day off earlier) with the Danish team, since the guys had been planning to make a rock running video for days. For this, they picked up some enormous stones off the beach, walking them along the bottom of the sea to the designated location. 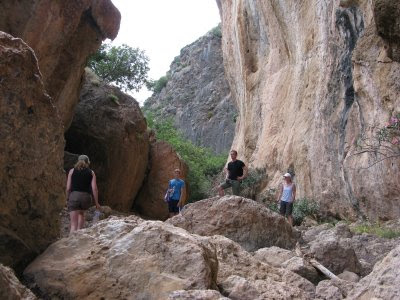 There, they went on to loose their speedos, to then run along the ocean floor with said huge rocks on their shoulder, naked, looking all manly in a stone age cave man kind of way, or maybe like the ancient Greeks? Anyway, if you must know, this is the secret to why all the Danish guys are doing 200m dynamics. There were some plans to involve Maria and myself in this endevour, in the manner of dragging a (naked, of course) woman/mermaid along behind them by the hair, to round of the cave man image. Needless to say, Maria and I stayed safely on the beach, well away from such indecent proceedings. That evening after the banquet and official closing ceremony, all freedivers were treated to the video of said Danish training methods at the Lotos Bar. It was greeted with much hilarity and Jakob and Jesper, the protagonists of the movie, are deliberating whether it is wise to release said film on youtube, or if this would give access to the 200m secret to too broad a range of freedivers, therby possibly sabotaging the Danish chances at the worlds.

This evening, I did not manage to hide from the Raki as well as the previous night. The evil perpetrator was not one of the safety team, though, but Johan, which was an attack that definetely came from an unexpected direction! Somehow, when I had booked my flights while sitting safely in the bookshop, it had seemed like a good plan to leave on the first plane out of Chania on Monday morning, meaning that my transfer was leaving at four. The only other freediver who had sufferd such a lapse of brainpower when booking flights was Johan himself, so it was the two of us in a taxi. I told him straight away that if he insisted on giving me Raki, it would be entirely up to him to get me onto my plane, a responsibility he accepted quite happily, making me drink a shot in the process. Alkohol consumption in general was rather higher than the night before, with good spirits all around. Unfortunately, I did not manage to stay quite sober enough to observe the gossip potential around me. Sorry! I promise to do better next time.

Four minutes to four saw me running to the hotel, where Johan, clearly better orgnised than me, was already loading his bags in the taxi. Me, I still had to do some packing. This is not how I usually behave when going to airports. I am normally very well on top of such things. It was the Raki, honest. Whith Johan’s help, I managed to get into the car and we went off on our two hour ride across the mountains. Without his company, this would have been quite disorienting, if not a bit depressing, but we passed the time nicely, with a mix of sleeping (mostly me, I’m afraid, watched over by Johan) and enjoying the last of the whole freediving experience. By the time we reached Chania, I was fairly comatose and may very well just have passed out in a corner at the airport for a few days, but Johan was good to his promise and took care of getting us and all bags onto the right flight.

Now I am back in Berlin, feeling more or less recovered from the two day party, thinking about actually doing some work. Or maybe not yet, but soon. Very soon.

Meanwhile, there is one more thing I would like to share with you: I have compiled a list of the top ten excuses for not making a dive. As you know, freedivers are never short on explanations for things not working out quite as they might have wished. Feel free to comment and add to the list. Here goes, from last to first place:

10: The waves were too big
9: I got seasick
8: I made a mistake: I ate before the dive
7: I made a mistake: I did not eat before the dive (choose freely between 7 & 8 as it applies)
6: It’s the photographer’s fault, he got too close and distracted me (me, after missing my depth)
5: I was forced by the organizer to dive in the afternoon. My noseclip only stays on in the morning (me, loosing air from my noseclip)
4: Jakob forced us to walk all the way Lissos on our day off, so we got tired (the Danish team)
3: A sense of guilt weighed so heavily on me, I couldn’t focus (Jakob, having made the Danish team walk to Lissos on their day off)
2: I was suffering from testicular freezing (Will Winram, having ripped a big hole in his wetsuit bottoms)
1 – the absolute winner -: I WAS TOO DEEP ( Johan, having blacked out at the surface after his 101m dive)

In general, we have found that it is best to have your excuse handy before you even get in the water, and the most successful excuses are those that blame outside circumstances or third parties, such as photographers. Fred Buyle makes a perfect victim. Anyway, we apreciate further additions to the list, and will vote on the best pool excuses in Aarhus. 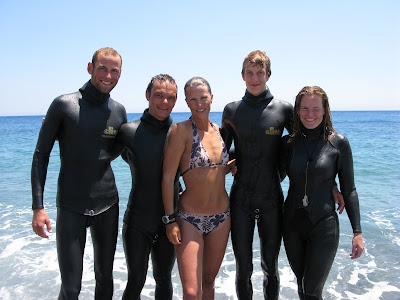 Danish team with the conveyor-belt coach