Action at the Mediterranean Freediving Meeting 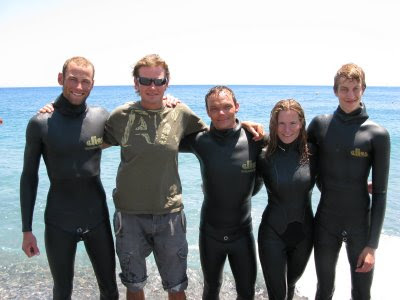 As usual, I woke up early this morning with the familiar rush of nerves, suddenly quite glad that I didn’t give in to any of the announcement devils that were hopping around in my head yesterday afternoon. After the oatmeal-banana-honey breakfast that has served me well on recent deep dives, I headed down to the beach to let Michélè distract me and keep me company. There I encountered a new rule for the surface protocol, written on the information board – as if we don’t have enough rules to remember already – that said: “ALL athletes are required to kiss the in-water judge after their dive. No exceptions. Rebels will be punished” This had everyone asking who the in-water judge was going to be, and some serious faces on the male competitors, as they were preparing themselves to kiss judge Kimmo or Alexis. Michélè has been very busy during this meeting, managing the onshore organization, checking athletes are present at the mandatory 60min before official top, and do not disappear on their own to the toilet any more after that. In fact, she send Rob King, also known in the freediving world as Robert the King, to go with Jakob one time, where he checked the bathroom for oxygen tanks that might be hidden in the trash, or any other forbidden items, such as bars of chocolate. Rob has been diving ridiculously deep, which makes me feel quite inadequate, as he was only about five meters ahead of me when we met in 2007, but now he’s happily popping down to the eighties. I think it must be the bright pink stuff he keeps having, which he claims is a sports drink, but we believe is in fact radioactive. We’ll check tonight, if he starts to glow in the dark, we know something fishy is going on.

I went out all by myself today, with no one to look after me. Sniff. As I got to the line, it was just getting a bit rough, but anyone who has dived next to the platforms surfing on the waves in Sharm last year cannot be phased by such minor details. I was worried that the sled might have broken my constant weight again, and I sure felt pretty weird and disoriented to about 20m, where I just started to freefall and everything was fine. Before I knew it, I was at the plate, thinking “hurrah! I made it” and “should have announced more...” Some things never change. Minutes after my dive, I started the coaching conveyor belt, which included Maria, then Nicholas Guerry, then Jesper. Maria wisely turned early, feeling a bit worse for wear from her great dive yesterday. Nicholas turned early, too, which is a shame, but better to be safe. By now the waves were pretty huge and the organizer’s team just did not keep up with the ironing! Guillaume Nery did another super easy 80m free immersion dive, he seems relaxed and is diving very well, with an obvious love of what he is doing which is nice to see in a world class athlete.

I went to find my next Danish coaching project, which was Jesper, who once again had to dive first. Unlike yesterday, when he needed stressing out, it was pretty clear to me that my job was more along the lines of “it’s only two more finkicks” and “all you need to do is equalize” this time round. By the time I got him onto the rope, the waves were enormous, but he was so focused, nothing seemed to bother him much. There was true excitement in the air when he left the surface. Stavros has introduced a great device this year: a top-rate sonar, on which they can follow the divers progress the entire time. A guy on the boat shouts out “seventy meters – seventy five – eighty...”, which makes it incredibly exciting for all spectators. Hearing “touchdown – coming up” was an amazing moment. As soon as Jesper appeared back at around twenty meters, it was clear to me that he would make it, he was still looking so strong. He certainly did not need his coach on this dive, and well deserves to celebrate this amazing performance with a lot of beers tonight. Next up was Jakob, and I think we were all truly hoping he would make this dive, too. Again, the shout “touchdown” from the boat had us holding our breath, but as he reached the surface he just could not recover quick enough and briefly nodded off after taking a couple of breaths, leaving Jesper the sole new Danish record holder. Considering that Jacob only started competing last year, this was a fantastic dive, especially since he said he equalized all the way there without problems. More will come from both guys in the future!

A new fashion has been taken on by a handful of freedivers at the last day of competition: the kamikaze headband. It sports the kamikaze logo and is a very useful item, since it is made to hold the Velcro tag, which the freediver now only has to slap onto his forehead. Even athletes with the worst case of freediving brain should be able to manage that and it eliminates the irritating question from the judges who like asking for the tag, when it should be totally clear from the smile on the diver’s face that he has got it. Well, now it is right in front of them. Here is a picture of British diver Stuart Bond after his successful 58m cw performance: Now there were lots more great dives, but I can’t talk about all of them, and anyway, I believe I have a party to go to. I am aware that everyone is well tired of hearing about all these dives all the time, and waiting for me to get to the real gossip, which I promise is coming up as soon as I have recovered from the likely three day hangover.