There have been sightings of an incredible ocean species here in Sarm El Sheikh: the mother and son team made up of Natalia and Alexey Molchanov. They were here for world records attempts in variable weight and constant weight, and it has been fun as well as impressive to watch them dive. Let's just say it is ridiculously easy for both of them! Must be something in the Russian breakfast. 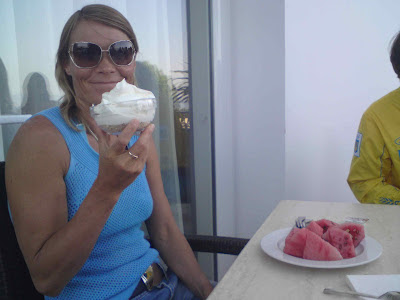 When it was time for her to take a day off after training deep for five days straight, Natalia came into the center in the morning and explained to the guys that she wanted to get in the water and do repetitions to 60m in constant weight. On the rest day. When this plan met with some gentle resistance from evil coach and angel coach, she shouted: "Rest! Rest! I tired of rest always! I loosing all my muscles!" and in the water she went. Astonishing. Her son in the meantime has a more modern training concept and took a couple of days off here and there, which he spent reading through an entire volume of "a game of thrones" in two days. I can relate to that!

I had fun in the water and was feeling pretty good, with a 60m constant weight dive at the end of week one and the first couple variable weight sessions to 80 and 90m - it was wonderful to be back on my rocket sled. The water is beautiful at them moment and one day we were out there messing about when a pod of around fifteen dolphins passed by! They turned around and came to play with us and the ropes around our plattforms, rubbing their bellies on the lines and - very interesting - biting into the moorings. This had Marco threatening to poke them with a stick next time, since it may well explain the mystery of mooring lines broken and cut when we have flat seas - little devils! 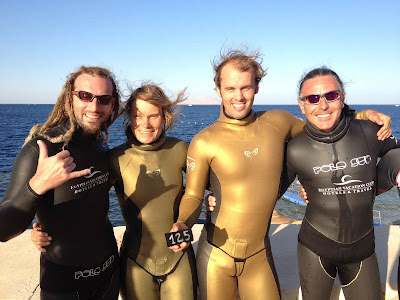 It was time for the world record attempts on Wednesday, a logistical challenge to say the least - we had half an hour to switch plattforms and set up between the dives, since there was a safety tech diver on trimix in 60m who would not have appreciated an extended bottom time. I was officially on counterballast duty but ended up as general plattform slave, mostly pulling the ropes with the guys - we had to set them and pull them up to and from 125m and more four times - tired arms for everyone around! Both dives went well and judge Ute and judge Robert the King were able to hand out white cards all around. I'm not sure how many world records Natalia has broken in her time - she probably doesn't know herself - and now Alexey is joining the family tradition. Congratulations to both of them, it's a pleasure to watch them dive!

Me, I have long way to go. Evil coach will most likely cancel all my days off, which means I have to go drink coffee. Immediately.