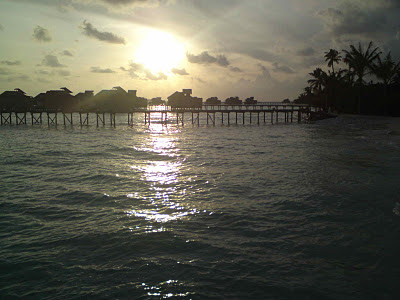 Having contained the suitcase explosion, I set off to the stunning Six Senses Lamuu (Maldives) resort, to join the first water/wo/men event. An hour after arrival, we gathered at the jungle cinema to introduce ourselves to the other water people. This was an intimidating experience. Everyone was either some kind of impressive action sport hero, or impressive conservationist, or both, with the odd rockstar thrown in for good measure. And then there was me - just a freediver who is rubbish at static! I left with a sense of slight worry, wondering what possessed the organizers when they invited me. See the jungle cinema below, photo taken from Grace Deliver's album: 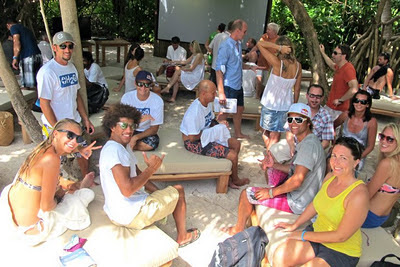 After a stunning cocktail party on a sandbank, surrounded by funky people looking beautiful, we were shown the new windsurfing movie, starring guys like Levi Siver, Jake Miller and Keith Teboul. I was well impressed, if not to say blown away. Whatever happend to the windsurfing I remember, that simply involved some (albeit handsome) guys zooming across the water at top speed? Now it appears to all be about flying 20m up into the air, perfoming insane stunts, while waves that can only be called monstrous are coming up to get you. These guys are NUTS! See video below for evidence.

I woke the next morning thinking: this will be interesting. My job was to teach a static session, for which a whole lot of the crazy people turned up, including surf diva Bethany Hamilton, whose villa pool we highjacked. I was quite baffled, for they all seemed to think doing a bit of static was pretty wild, and a great experience. As usual, people have little understanding of what happens when you hold your breath, and as one of them was kind enough to push his limits for all others to see, I believe I managed to get the point across that training underwater by yourself is not a good plan. The picture below was taken by Mariah Sievers, who held her breath in between - the girls rocked! 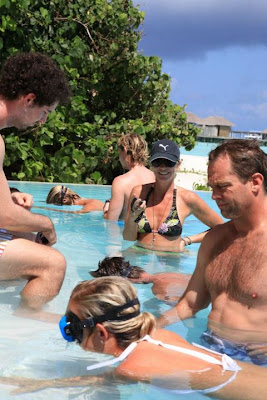 The rest of the stay passed in a whirl of teaching clinics, attending talks, meeting people, and trying each other's sports. I had the bright idea of doing a little stand up paddling with Keith, which quickly turned into a longish session as we made our way out to the sandbank. Having managed well enough on the way there, I was surprised to be falling off all the time on the return journey. It took my blond head a little while to process the situation: the waves were now coming from behind, secretly sneaking up to get me! That is just wrong, that is. I have no idea how anyone does this in monster waves. At least when I am snowboarding, the bumps stay put! 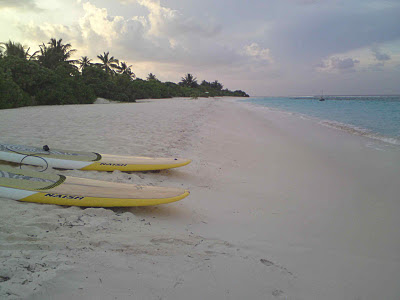 I cleverly had my first ever surfing lesson a couple of hours later, which involved - and I know this should have been obvious - more paddling! Noted surf coach Terry Simms had us out on a lovely small wave, which broke very shallow over a reef, and, overexcited by standing up on the first try, I managed to find (and hit) the one bit sticking up to just below the surface, thus earning the first reef cuts of my surfing career. An hour later I was unable to lift my arms, or head, but blissfully happy with it all.

Amazingly, everyone there thought freediving is nuts. Well guys, at least it is a non-contact-sport! Really. Lunatics, all of you. I had a fantastic time meeting the other watermen, and it was very interesting to see how we instantly got along with each other. It seems we think alike. On this trip, we were united in a common cause: our love of the ocean, and wish to look after it. The charities present doing great work were +H2O, Water Charity, BLUE Marine Foundation, Plant a Fish...I hope we can do more together in the future.

Oh, and: all my fears about surfing have been confirmed. It is completely, utterly, and instantly addictive.