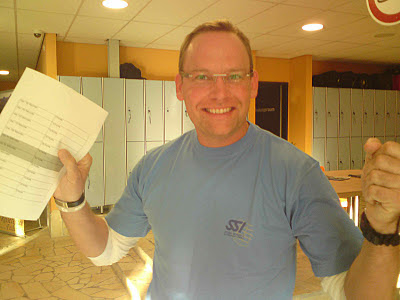 Ronny Kaiser Kain conviced me to do it again: join the madness that the guys in Wendelstein disguise as the SSI Dive Trophy semi final in Siegburg. I was the surprise guest, although maybe not such a surprise, since the only video online from last years' event is me demonstrating the freediving challenge. I had a sneaky feeling all the candidates have been secretly practising.

Since around thirty of the mad people made my - clever and difficult, or so I thought - freedive challenge last year, I was a at a loss as to how to make it harder this time round. The problem is: they don't care what happens to them, as long as they get a point for it! Seriously. It is amazing. If you ever had a student who can't equalize, send him to the dive trophy, and he'll be down and up in record time. 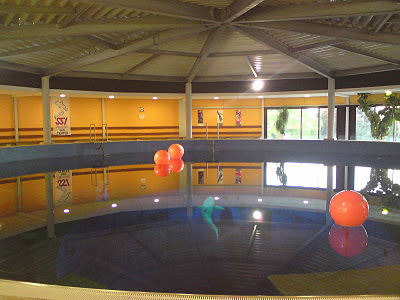 We went for simplicity in the end, and just had people dive as deep as they could, 20m being the bottom of the tank. Four of them did it in the first fifteen minutes, all sprinting, in all kinds of unorthodox styles, but touching down nonetheless. I was having visions of lots of twenty meter dives in my imediate future, but some of the candidates had mercy on me and stopped before the 15m mark. All in all, I was impressed by the level and what is possible with a little motivation, and am looking forward to seeing the top ten at the Dive Trophy Final at the Soma Bay Dive Week. This happens at the Robinson Club first week of December, and I'll be around teaching workshops and having fun, so join me if you like!

I got out of the water after only 57 dives and had to rush off to the airport. This is clearly a mistake! A promise to stay around for the beers next year had two candidates announce that in that case, they would make sure to be back. Oops - not quite the message I meant to send about freediving...

Since it is too late now, you may as well come for the Dive Trophy madness extravaganza 2012. Start collecting those points and have a drink with a freediver, who is, as of now, ON HOLIDAY!!!!

Well. At least from training.