Here is a video from our tandem no limits world record dive!

After a semi day off I went back to train for the variable weight world record. The plan was to do three 80m dives and get comfortable on the variable sled. This is the sistership to the deltaflyer, and is really nice - only problem is, I have to hold on to it which is creating stress. In any case, I was sure this time it would be easy, but no such thing: I felt amazingly horrible and completely unable to focus.

After I was hit on the head by the tank on the way down and hit by the seld on the way up during the first dive, I jumped on the platform to try and get my concentration back, but instead found myself crying tears of frustration, which would not stop during the rest of the session! So annoying. Here is a problem for a blond diver to solve: how to hide the fact that she is crying from a bunch of men who are monitoring their athlete closely, and a cameraman who is zoomed in on her face! During the breathe-up for the final dive, I was so bad I could not get a proper breath, and then Marco messed up the countdown - straight after "two minutes" he jumped to "thirty seconds"! Cazzo! I turned to him and said, quite nicely: "I don't think so." That had them all jump to attention. 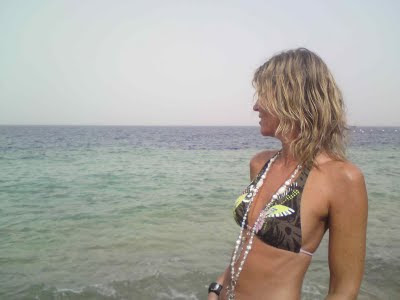 After all that, I was really lost and unsure of how to go on. In the morning, I just wanted to disappear, so I wandered off to the beach at the very far side of the deserted hotel. Ten minutes later, my coach had found me! How? How? He's getting spookily in tune with my head, he is. He even came up with the perfect way to fix me: challenge me with something difficult. Just when I was worried that I was too tired to dive, he said to me: "today we do 100m. Or maybe 110m, if you feel good." How the hell could I feel good after yesterday? Impossible. But then my mind started to work. Eight days to go. 110m today, 120m Monday...hmmm.....

By now I simply trust Andrea on his ability to judge how strong I am, so by the time I arrived to train, I had my bite back. My mind loves a challenge. 110m it was, not too bad except for trying to leave the bottom three times and being stuck each time until I dropped way down again and untangled myself.

Last night boss-instructor forced me to eat an entire pizza. He is getting bossier by the minute! Anyhow, today is a rest day, so I will go and hide from him.