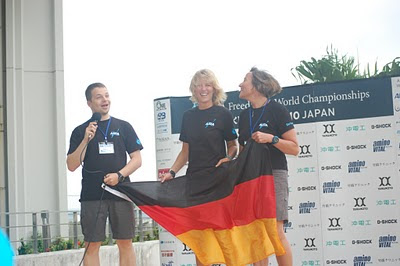 Having made my way across a couple of time zones, I climbed onto the hotel shuttle bus at Naha airport a week ago, feeling weird and spaced out. The hour drive did not present me with lush green tropical gardens, as I had hoped, but with a city that blends into city that borders onto a city. Continue in this fashion and you have it. Since the entire island got destroyed during the war, it seems that things have been built up again quickly and randomly afterwards, covering most of the available space in the south with buildings and paved things.

Still, I had high hopes for the “Tokio Dai-ichi Grand Mer Resort”. It turned out to be a concrete high rise. Rooms are spacious, though, and the staff friendly, so I thought I would be fine if I could just go and find the pool, have a swim and then sleep for a couple of hours under a sunshade. Book and towel in hand, I set off. I should have been suspicious when I was told that the pool was on the second floor. It is indoors. There is no beach nearby. On top of my jetlag, I instantly began to feel very claustrophobic. 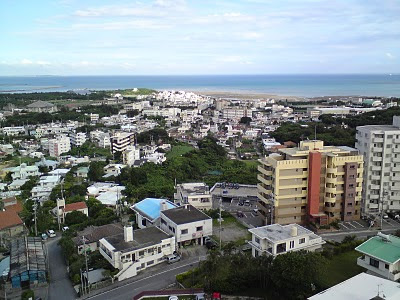 So far, this has been relieved somewhat by the presence of my teammate Martin, Norwegian Elisabeth, the Danish team and my favourite Kiwi divers Guy and Kerian. It’s all ok when you have people to have fun with. Sure enough, I went out to train at the dynamic pool with the Danish crew, and did my first fifty meter swim in eight months. The result was predictable: it felt awful. The most worrying bit is having lactic legs before hitting the wall. Fortunately, I am on “team holiday Germany”, so I was about to quit and go home when Jakob and Jesper caught sight of me and simply made me do a proper(ish) dive. After the fifty meter turn, I could not swim in a straight line for some unknown reason, but decided to ignore this since oxygen felt fine, so I came up at 100m, actually feeling alright. Damn. Now I will have to think about pushing a bit after all.

It was a day for sorting out technical bits, so I asked Danish alternate Henning to help me check if my neckweight was right. He held me in place just where I would like to be neutral (turns out my weighting is perfect) and then popped up to say: listen, don’t get offended, I promise you what I am about to say is a good thing, honest, it does not mean you’re fat, it’s just, I meant to say – here goes – you have heavy legs. Why, thank you, Henning! This is the first time a guy has apologized to me before paying me a compliment. I guess it takes a diver to understand that a compliment is what it is. He says he got a very defensive, if not outraged, reaction when he said this to a girl before, hence the apology, in case I might get all upset with him. It was very entertaining, and quite charming.

My favorite Kiwi divers Guy and Kerian (background) waiting to dive, sheltering from the rain

Deep diving training itself is complicated by a few factors: one, it takes 45min to drive us athletes there in the hotel shuttle bus, two, the conditions are volatile to say the least. It appears that there are very strong tidal currents, so there is a small window in which things are ok, and then the lines and divers go flying sideways. I pulled down to do a hang for my warm-up, and started contractions after 28sec! Did I mention things don’t feel quite right? On the official training day we were greeted by a rainstorm with thunder and lightning and large waves. After helping the Danish team with countdowns and manning the counterballast, I managed to ignore the fact that I was having contractions on the way down and swam to 50m, not a happy dive, but one that was ok, in any case. A devil has made me announce 56m for the competition, which means I do have to concentrate more than I had planned. Team holiday? What? Where? 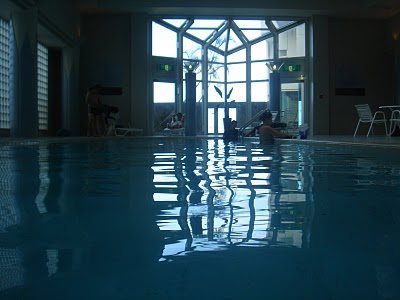 Most of us have been in the very warm hotel pool daily, doing statics. I am still just beyond 4min, with a big struggle, which is simply wrong, if you ask me. I have observed a couple of very funky sambas from athletes that shall remain nameless, but who are clearly struggling with the temperature. My favourites for the moment are team New Zealand and team Denmark. They all seem to be pretty together, training well and having a good time, too. The French team is the most professional looking, with Sony Ericson written all over there various bits of matching outfits. Problem there is, the spirit seems a bit low, because they made their final selection only a couple of days ago, so Christian got kicked out. We’ll see how they do, but they collected a yellow card for Morgan on the first constant weight day, which was yesterday. We have been split into two lots of divers, and as always, I have ended up with the day I did not want, namely day two. Getting restless with me are Jakob and Rune, Jesper and Kerian got lucky and have collected their white cards for a 90m and an 88m dive.
The rest of us decided to leave the hotel and make our way downtown for a bit of sightseeing, led by Martin, who is turning out to be even more useful than normally, because he speaks Japanese. It was good to be out and about, but also turned out to be rather hot, so we felt cooked after about twenty minutes. We were contemplating whether it would be rude to go for a swim in the wishing well, but decided against it and went in search for a taxi and a beach instead. This is where we were taken: 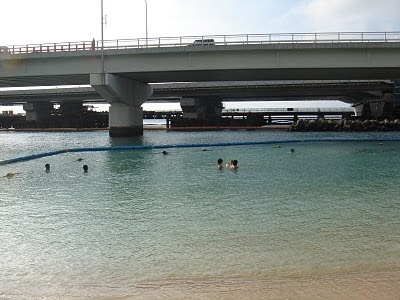 I promise I have never seen anything like it. A beach under
neath a motorway bridge. It was only topped by an experience the Danish team had earlier in the week: they arrived on a beach, hot and sweaty, looking forward to a dip, to find that there was no water! The tide was out. All the way out. Apparently, the lifeguards were still on duty, though.

Our constant weight competition day was cancelled due very strong winds. I am now back in restless claustrophobia mode, and really wish I could have done my dive yesterday. Going to do another static. It is WRONG.