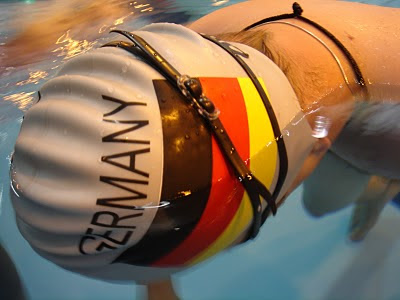 After two days of weather-enforced rest the second constant weight competition day finally kicked off. It started badly for Guillaume, who went down happy as you like to do an easy (!) 102m dive, when he encountered a rope wrapped around the main line at ninety. Faced with this kind of problem at this kind of depth, most divers would have turned. He thought, oh well, I’ll just take the whole thing down to the plate with me, so he pushed the rope all the way to 98m, where it finally got properly stuck, so he went up. We are all very happy he did not get tangled down there. He then got offered to do the dive again at the end of the day, which is in the rules, of course, but may not be a very sensible thing to do considering such minor details as risk of DCS. In the end, all the team captains signed a petition to award Guillaume the full points for his dive, since we are all simply glad that he is unharmed and fully recognise that he would have done the dive easily. The decision went through, and the French team are now in third place, seven points behind team Denmark, who in turn are four points behind the Japanese.

My training buddy Elisabeth has been unlucky with an ear infection, so could not start, but was there to coach me and Martin. I felt quite bad, dizzy and light headed on the boat, but was instantly happy as soon as I did my duck dive. Until a cramp hit me at ten meters, that is. I still carried on swimming, trying to wiggle my foot at the same time, and even managed to take the first proper huge mouthfill of the season. Annoyingly, the cramp just got worse and worse, so at 40m I finally had enough and swam back up going au-au-au-au the whole way. There is only one thing I have to say about this: grrrrrrrrrrrrr. 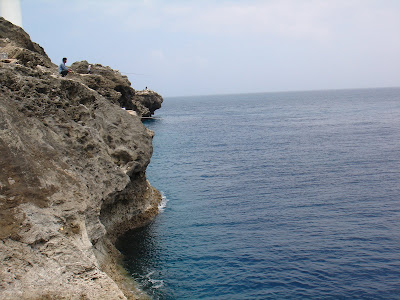 Fortunately our Danish friends were there to distract me, taking Martin and myself on an outing to do some snorkelling around some cliffs and a cave. The spot was beautiful, with lots of little holes to swim through and even a fair amount of fish to look at, especially some very tame batfish, which I just love. There was also an amazing amount of beginner divers being carried around by their guides, which gave me flashes of memory from my previous life as a dive guide in Thailand. Let’s just say I was glad it wasn’t me. On the surface, we had what felt like thousands of snorkelers - Linda would have had a field day. Having said that, I noticed that the snorkelers here are exceedingly well behaved, all with lifejackets or giant pink inflatable rings to support them, and all in an orderly group, hanging on to each other and being pulled about by a commando guide at the front. The cave was beautiful, you could swim over 50m into it and then back out against the light, past schooling fish along the way. We played around for two hours, freaking out hapless scuba divers and filming each other. Lovely. 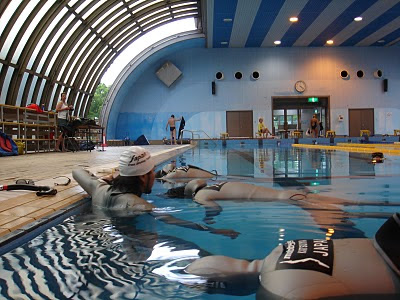 Next, it was back to static training. Spending the day in the hotel before it was time to go to the pool did not help, and I could feel myself getting grumpier and more miserable by the hour. Sure enough, what followed was a new personal worst, as Jesper calls it, in training. I quit at three minutes. Elisabeth spoke to me sternly and made me go again, so I quit at 3:15 the next time, feeling amazingly miserable. This meant that I had to have another session yesterday morning, of course, and after a lot of struggling I have finally made it past five minutes for the first time this year, so am feeling a little better about the static competition this afternoon. 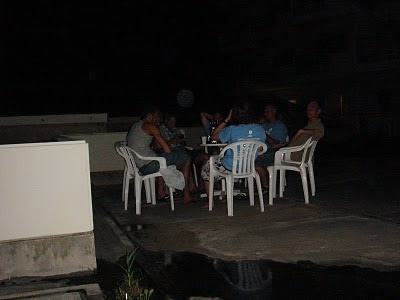 We have had a bit of a spontaneous party, too, organized by team Denmark, who went out and bought some bottles of wine, invited anyone they came across, and went to climb off their balcony and onto the flat concrete roof that their room opens onto. Now this is hardly a glamorous place, but we stole the chairs and a couple of tables from the rooms around and ended up with about fifteen people, having a rather good time, extremely pleased with the fact that we could feel the breeze blowing on our faces. Doesn’t take a lot to make us happy. The highlight of the party came when Jakob shot up a couple of rockets and firecrackers he had bought earlier in the supermarket. We’re an easy enough bunch to please, really. Give us some wine from some toothbrush mugs, a firecracker, and some silly jokes, and all is well.

Now then. Must rest for static. Urgh.