Right, it’s been a while. This is due to the usual winter season zero training situation. I am happy to report that nothing has changed: against all plans to better myself, I once again stopped pretense at physical activity six weeks before Christmas. That is, if you don’t count the eight hour a day giftwrapping marathon at the bookshop. Water? Pooltraining? Freediving? Memories from a distant past. 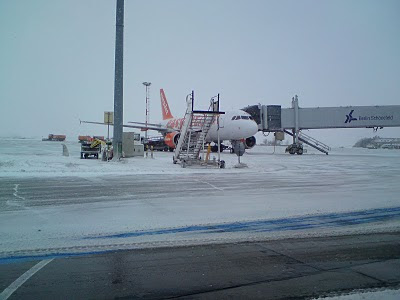 An ominous feeling of trouble ahead (in the shape of the snowboarding season) got me out of the house for a lovely snowy Christmas run on the 25th, but after that: nothing. I was very nearly saved from bruises and pain by a blizzard that moved in in time to stop airplanes from getting out of Berlin for two days (see above), but in the end I made it to the Dolomites last Saturday, to face up to Joerg Egli’s relentless and brutal week of Pure Boarding punishment.

Waiting for me in Wolkenstein were not only Joerg and 29 other riders, but my new weapon of choice: the black Diamond. This is what Joerg created out of the prototype he let me ride in Aspen last year, and which he wouldn’t sell to me, arguing that he still had to tweak it a bit. And boy, did he tweak it. It simply is outrageously fast. I spent the first day trying to master the beast, which one can only say was riding with me rather than the other way round. I stuck to the back of the group, trying to avoid being seen messily crashing around the mountain by my fellow riders, who were all looking intimidatingly good already. 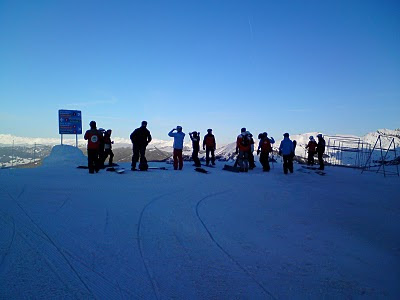 Come to Wolkenstein and one thing is for sure: you will soon regret every day spent without exercise. This is how the pure boarding carving week works: get up at 7:00am. Be outside the lift at 08:15, waiting for the doors to open so as to be on the very first chair/gondola. Make the first tracks down the freshly groomed slope by 08:35. Don’t ever stop on the piste. RUN into the next lift, ride up, ride down, RUN into the next lift...and so on. If Joerg feels gracious, you are allowed a sit-down lunchbreak of between 30-40min. If not, it’s standing outside a Kiosk to have a piece of chocolate and some water. It’s snowboarding bootcamp, with a lot of laughs thrown in, especially at the bar in the evenings. This deceptively peaceful picture shows the only coffee break we had all week: on our final afternoon! 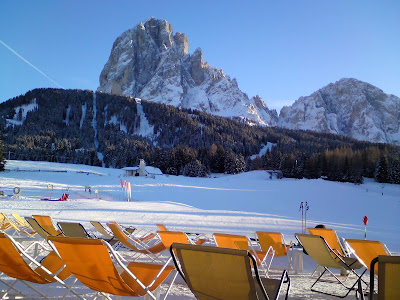 After the first day, I was unable to walk down any stairs. I tried my best to hide this, but Joerg caught me navigating the three steps down to the dining room and instantly knew what shape I was in. Rarely have I known such a level of self-induced pain. To top this, the toughest day of the week was next, where we covered an incredible amount of distance and never stopped, since it became quite clear that we were chancing it for making it back across all the valleys. Fact is, we didn’t – a ride down to the last gondola in the gathering dusk brought us to a stop when the lift guys wouldn’t let us on anymore. So it was a hike back up and a 100Euro taxiride! Thankfully split between nine of us. To give you an idea: we set a new pure boarding record, riding down just over eleven thousand meters of altitude in one day and covering a distance of 100km. No surprise the legs were aching. Fortunately, there is such a thing as muscle memory, and I got progressively stronger over the week. I even began to feel that I might yet master the board, which has the most brilliant edge hold on ice I have ever experienced. This is a backside turn I accidentally got right, on a seriously icy steep: 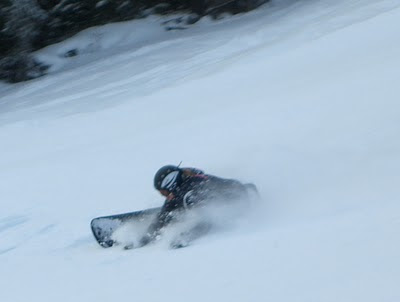 Bliss. Now my muscles are recovering, but I have a large range of bruises. At least freediving is a no-contact-sport!