Finally made it to the diveshow 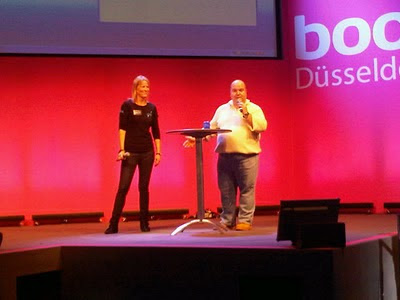 For some reason, the largest watersports tradeshow in the world (called "Boot", as in boat) is happening once a year in Germany. Amongst fancy yachts and tons of beach bum gear, there is an entire hall full of diving related things. It’s a big and quite famous event in the German scuba diving calendar, and, so far, I had never been there. This year, I was invited by Johnson Outdoors, who run Scubapro, Subgear and Uwatec, and have recently provided me with lots of fun when they gave me the Galileo computer to take down on the sled. The idea was, I should give some presentations over the weekend and hang out on the Scubapro stand to chat to people and answer questions, and, preferably, turn them ALL into freedivers! I’m working on it.

It quickly became apparent what a beginner I am at this kind of thing when somebody asked me for an autograph card. I don’t even have a business card! Why anyone would want my autograph on anything beats me. The show was great, lots of fancy stands with shiny gear, which my tech diving heart loves. I also got to meet famous tech diver Mark Ellyatt, fellow Scubapro guest, and have bored him to tears all weekend by asking him endless questions, probably exactly the same ones any fool who has ever been below sixty meters asks him at every show. He was very patient, though, and smiled sweetly at all the bearded divers who came up to him to ask, in German, where they could get their free mug. That’s what you get for wearing a name badge and looking friendly and aproachable.

All the talk of diving aside, it is still snowboarding season, so I am off to Aspen, Colorado, on Sunday – sore legs are sure to follow. I am so excited to be going, I am even looking forward to the 17 hour journey. I fear I might be a little addicted. I tortured fellow freediver William Winram, who used to own a snowboardshop, by sending him a nice carving picture, to try and convince him to join us on the slopes. He said he needed to see that photo about as much as a hole in the head. Sorry Will!