Note to self: stick to the plan! 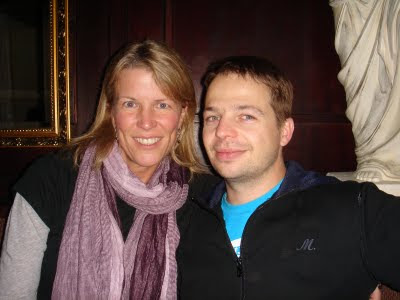 This would be a moment for my friend Roland. He would just smile calmly and see everything confirmed that he believes he knows about me, and unfortunately, he is right. Seems like I can be a bit impatient at times, and get overexcited if the diving is going well. Now Roland is forever telling me to chill out, relax, calm down, let the diving come to me. I am beginning to see that he might have a point. Note the sheepish look on my face in the picture, with Martin, and also the lack of Champagne.

It would also be a moment for my fabulous tech diving instructor, Aaron Bruce. One of the first and most important lessons he taught us was “plan the dive, dive the plan”. This is an iron rule when you are going down to the depths of the ocean on trimix, with the invisible but potentially deadly decompression ceiling above your head. It means you are going to plan what you are doing meticulously, and you are going to stick to this – no cutting corners, and most importantly, and here we have thing that would have served me well yesterday: no getting carried away.

So here we were, at the RMC in Wiesbaden. The pool is wonderful, bright and spacious, and has a great vibe. I was suffering from the usual nerves, or maybe not quite, since this time I was busy feeling nervous about the dynamic no fins dive while I was breathing up for static. Nothing like being stressed out by a discipline that is not due for another five hours whilst listening to the countdown for another one. As things were, I had overcome my static low point form earlier in the week and popped up at 5:24, where I stopped because I did not want to tire myself out too much. Did I just say that? I did a static of nearly five and a half minutes and stopped early? Incredible. I am still trying to understand how this has happened. I will share the secret with you as soon as I have figured out which of the yoghurts that I eat is responsible for this mysterious change.

After coaching Martin I was off duty and had five hours to sit around and get more and more stressed out. Talking with Eric van Riet Paap later in the restaurant, he claims that I did not look nervous at all. This comes as a surprise to me, as I am always under the impression that I have “Oh SHIT” written across my forehead in giant letters. I guess he did not hear me say “I want to go home. Can I go home?” to anyone who cared to ask me anything that day. Having been abandoned by my Danish team, who all opted to stay away with flimsy excuses such as work and illness, I found help from Olga Martinez Alvarez, who came and kept me company 20min before my dive. This is very important, as I need to have someone to moan at, which gets rid of some of the nervous energy and distracts me from the fact that it’s nearly time to go. Once underway, all nerves were forgotten, as usual. I had the standard moment of wanting to quit at around fifty meters, but I have figured out a perfect way to get myself over that: I just distract myself with making up various reasons for why I came up early. Playing through the different scenarios and actually planning how I am going to explain the chosen one to Martin keeps me busy for at least 25m. Once I have turned at 75, I can usually push on. It all gets interesting after the 100m turn, because this is when I start to get excited about doing a great dive. At this point the plan should have come into play, which was the following: turn at 125, push off, come up - bingo - have record. Just as I practiced in training only a week ago. I stuck to this perfectly, until, and here is where Aaron will be laughing (do NOT get carried away...), I got quite pleased and excited by the fact that I had pushed off the wall and was still swimming along. It was only six meters! Anyway, I surfaced at 133m, totally forgot to do any decent breathing, took off my goggles and noseclip and squeezed out “I am ok” through a fit of the giggles brought on by the fact that I was already sinking with no hope of recovery. I was still laughing when the two safety divers held me and did not bang my head against the side of the pool in frustration at my own stupidity, as one might have expected. The first thing I said when I was done laughing was: “Oh no. Now I have to do this AGAIN!”

Here we are. Instead of having a party month, as I had planned, I will be training – again – for the long night of Apnea in Berlin, which is coming up in six weeks’ time. Let’s see which lesson I will be learning during that competition.

Sanne Buurma said…
Your static looked very clean indeed, Jorg also shot a video clip from that so if you would like to have that I can arrange that.

Better luck next time on the dynamic, hopefully you'll make it in six weeks.

I have to say that the way you keep yourself busy in the moments that are the hardest is actually quite a good one I should be trying the next time I do dynamic.