I have been busy counting tiles in the pool again. It was hard to get started with this after a week of counting the (admittedly few) groupers in the Greek sea. Funnily enough, motivation for pool training was at an all time low – weird, that. A phone call to Elisabeth confirmed that she was in much the same state, so I hatched a clever plan, kidnapped her boyfriend (coach Martin) and drove back to Aarhus for a much needed four-day-bootcamp. Here I am with training buddy Elisabeth: 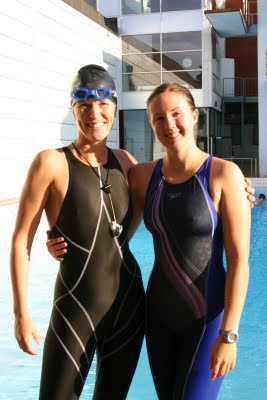 We kicked off by going to Spanien. Who would have thought? Somehow, going to Spain to do some static does not sound so bad. Turns out it is a beautiful old swimming pool, right in the centre of Aarhus, where they are mad enough to let a bunch of freedivers do what they like after closing time – just switch off the lights when you leave! Doing some technique training for the dreaded no fins soon made me forget that I was supposed to be in Spain. Martin and Elisabeth were having a lot of fun watching me turn. It would seem that it is impossible to mess up the turns in no fins. Trust me, it is not. I managed to get my bottom sticking out of the water as well as dragging my chest along the tiles. Don’t ask me to explain. Coach Martin was in a state of shock and actually at a loss as to what to do with me for a moment. Next, we did some statics in the whirlpool, sadly without the whirling, which would have been nice. I like changing things ever so often, so opted for a no warm up max, and much to my surprise, managed 5min without too struggle.

Next day we were back at Elisabeth’s private pool, next to her house, where I did not get to observe the secret to the Danish success stories, since they all just sat in the sauna and chatted away. Stig was there and filmed me, followed by some much needed advice. He kindly picked the four worst things (turns...) and kept the rest to himself, so as not to confuse me too much. Training was alternated with eating lots – Elisabeth and Martin are making me – and fun things such as a run on the beach. What I did not count on was the fact that the beaches have mountains here, and Martin made me run up and down, which positively killed me.

After four days, I felt more or less ready again. Then I went off to London and got distracted by a wild party weekend back in Berlin – out till five in the morning Friday night, Saturday night and Sunday night – and somewhere in there the Aarhus bootcamp was lost again. Since then, I have been busy in my Elixia pool, trying to remember how to freedive. The panic moment was Monday, when I could not get past 3:30 in static! Tuesday was acceptable, though, so I am feeling half ready for the Rhein-Main cup on Saturday.

Or am I? Shit.Quietly getting nervous here.

Sanne Buurma said…
Sounds like a good training you had with Martin and Elisabeth. See you on Saturday at RMC, all will be fine ;)
1 October 2009 at 23:18