I made it back to Crete for the second Mediterranean Freediving Meeting. Truth is, it was a close call: I had a particularly blond moment at Athens airport, where I forgot to put my watch forward by one hour and was still happily sitting in the McCafé, reading, when I heard my name from the loudspeakers, asking me (plus a couple of other blond people) to please make my way directly to gate 31, where my flight was now closing. I ran through the airport and thought I was clever when I put my divewatch in my bag at security, to stop it from setting of the beeping thingy. Unfortunately, it did set off the very slow guy who was x-raying my belongings, who had to ask his boss, who had to tell another equally challenged underling to look at my bag, who had to rummage through all the important things we girls carry around with us. When I arrived at the gate, they had to call the captain and ask if there was time to get me to the plane. Moments later a guy pulled up in a Volkswagen Golf, and drove me across the airfield, tires screeching in the corners. You can imagine my relief, and my surprise, when I found the flight full of freedivers, most of whom had spent four hours at the airport, too, but had all made it to the plane on time, since the only blondes (William Winram and Bérangère Duclos) had Will’s wife Michéle to take care of them. A taxi ride across the mountains delivered us to Sougia, where we headed straight for the beach and the Lotos café, our favourite hangout from the year before, to kick off the freediving meeting with one of their fresh juices. Raki will follow on the last night.

We are around thirty freedivers this year. Most have been attracted by the raving of the ones who were here the last time. In a way I am having mixed feelings: on the one hand, it’s nice to see my friends, on the other hand, it’s a bit like one of those secret holiday spots: you tell everyone about them and before you know it, busloads of Thompson package tourists have arrived. Never mind, I’m sure it will make the final party even better. Organizer, head safety diver, and general man of all trades Stavros has set up a list with slots for everyone to sign into training times. He is a little less energizer bunnied than last year, mostly due to a very well trained crew of safety divers, whom he has given radios, so he can now boss them around at all hours. I went to sign up for some sled diving right away and was fascinated by a note stuck to the pen that reads: “If you remove this pen from this list, it will selfdestruct and all your apnea capabilities will disappear instantly”. Apparently, and I am not mentioning any names here, plans have been made to plant this pen on fellow competitors as a fantastic new way of sabotaging opponents. When the first person fails to leave the surface as they attempt to duck dive in the competition, we’ll know that the pen has found its victim.

Training was off to a good start for most of us. I remembered how much fun was to be had whizzing down on a sled when I headed right down to sixty and then seventy meters in the first two days. Many of us have commented on the fantastic conditions, how calm the sea is, and how blue the water. Stavros claims that he has been out painting everything blue every morning and then ironing the waves, but I think he is lying, and has in fact passed this task to his safety slaves. I have been out early with William Winram, Stavros and Nicloas Guerry, to dive on the sled. William had obviously not had a good enough word with (brunette!) wife Michèle before he set off to dive, and had proper blond episode at 120m on the new giant no limits sled. It is a clever construction: When you hit the bottom, you pull out a pin that releases the weights. Then you inflate the liftbag, and off you go, minus thirty kilos, at ridiculous speed, back to the surface. Now Will, combining blond hair with a male thought process, decided to be extra clever and inflated the bag while the weights were still attached, to the point where the sled was beginning to move. Then he pulled out the pin and dropped the thirty kilos. You can imagine what happened next. The sled, now turned rocket, took off at warp speed, smacking Will’s foot but mercyfully avoiding his balls as it blew past him. He tried to grab hold of the kneebar – not a chance – and shot of the bottom attached only by his lanyard, which he had to climb along to get back to the sled. He spent the next 100m hanging on with one hand, while clutching his goggles and hood with the other one, screaming, in his own words, “fuck, fuck, fuuuuuuck” all the way up. At least he was screaming in his head, and gave me a very convincing demonstration of the facial expression he wore during the twenty seconds it took him to get from 120 to 30m. Here’s a picture: 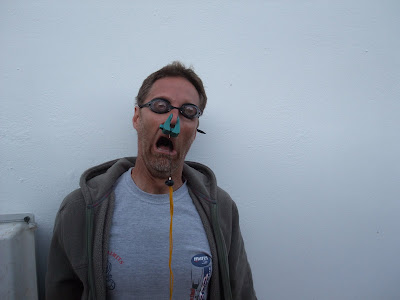 Yesterday the weather turned and a strong wind moved in some biggish waves. I was out on the first zodiac taxi again, together with Nicolas Guerry, whom I managed to elbow out of the way (well. Ladies first, after all) to head down to 80m before he had a chance to get on the line. It was a great dive, except that I did not manage to pack very well, due to the fact that I was submerged in waves all the time, and then had no air left to equalize at the bottom as planned. As soon as I was safely back up, Stavros announced that the anchor was dragging and we were getting into shallower water by the minute, so he cancelled all diving for the rest of the day. Somehow, and I am not quite sure how precisely, Nicolas has decided that it was all my fault and I am to be held responsible for his missed dive. Now, and feel free to express your opinion here, in my experience it is usually the men who are to be blamed for everything? Anyway, I believe I have been made to make up for it, so all is well. Today he went out to do some more variable weight, and returned having decided that he does not like sled diving. Something obviously didn’t go well, but since I am having a day off, it was not my fault this time, honest!

The Danish team is here, represented by Jesper, Maria, Rune, Jakob and Christian, who was training with me in Dahab. He has been steadily heading deeper, but said he chickened out today, a habit we will not allow him to pick up. Meanwhile, Maria’s luggage just stayed behind in Kopenhagen, so she has spent the days in her sarong, and the time in the water in my 3mm suit, which fits her perfectly. I am convinced she is headed to 70m, which Jesper passed today with a pb of 73m. Every time he gets in the water, he does a pb, it seems, and then he had the cheek to complain that he had air in his mouth but could not figure out how to use it. This seems to be a very desirable problem to me – I would love to have air in my mouth at seventy meters. In fact, I would love to be at seventy meters constant weight, period. Jakob is even more annoying, diving to wherever he wants with plenty of air to equalize and strength to spare. The brits are represented by George, Liv, Dave and Stuart. It was Livvy’s birthday yesterday, so George organized a special treat for her: a birthday swim with lots of freedivers, all dressed in blue. Now Liv has a special thing about men in blue, you have to ask her for details, but since plenty of them turned up, it was a right birthday treat. I promise to get hold of a picture and post it here soon.

In the evening, we all headed to Lotos (again) where she was given her present of an enormous blue inflatable shark. Yannis, one of the safety divers, also had his birthday, so the guys went out and got him an inflatable turtle the size of an island, which looked like it could eat the shark for dinner. Things were going fine when Rob King turned evil and started to bring out the Rakis, getting Liv into great spirits pretty quickly. We reached the peak of excitement when she discovered the longest eyebrow hair ever on one of the safety divers, which, and I have seen this with my own eyes, reached down to his cheek. Liv was so fascinated by this, she started to go round to measure the eyebrow hair of all the guys, until she was taken home by George and Stuart, who were beginning to worry that she might develop a bit of a fetish for men who wear their eyebrows long enough to have to flick them aside when they look at you.

Tomorrow we are hoping that Stavros will have found the off-switch for the wind again, although he seems to be too busy being bossy to pay attention to small matters like that. Dave Tranfield, known to his friends and builders up north as Trannie, has been inching his way deeper in constant weight no fins. Today he was pleased with a result of 45m, and showed great common sense and unusual macho man reserve in announcing that he would go for 46m tomorrow. Stavros, in bossy mode, was having none of this and told him that he should go for 47. When Dave said he felt that 46 was plenty, Stavros said: “47. It’s my rope!” Whatever next? He has told me that I should set the plate to 90 tomorrow, do I dare to disagree? He is shorter than me, but in terms of body mass, I’m afraid I might lose. I’ll report more soon. So far no one has got off with any people they shouldn’t have, so I apologize for the lack of interesting gossip. If none is forthcoming, I promise to make some up.

Morten Villadsen said…
Thanks for the update on the Danish team - all us sofadivers are sitting here waiting for news about Maria unashamed freediving without suit and Jakob overcoming his ribcage-wakeboard-injury...
Good diving to all of you! looking very much forward to hear more details on everyhting goes!
Good luck on the 80m... to all of you! :)
26 June 2009 at 13:58

martin_gk said…
Girl, I told you, what you need is a personal assistant! Someone who can coach, train and safety you but also carries your passport, drive you to the airport and (this is new) is setting your watch right... unbeliveable...