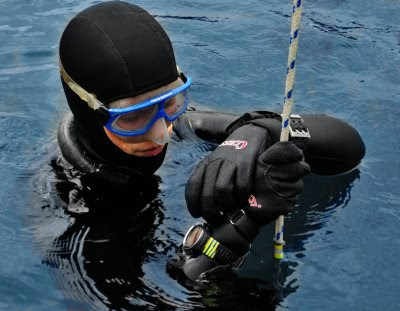 Since I have been moaning about the pool for months now, I am glad to report that the first deep diving is coming up in eight days’ time. This year, I am starting the depth season not in the warm, blue waters of Egypt, but in Hemmoor. Hemmoor is a lake in the very north of Germany. Now “lake” and “north” do not normally describe my natural habitat, but I have been talked into going there by Martin, who is organising a small competition with only one choice: constant weight no fins. Those who have dived with me will now that no fins is not my best discipline. I am hoping that when I turn at 30+ meters, all the swimming I have done in the pool over the last few weeks will turn out to have had a positive effect and I will not fall back down between strokes anymore.

I am also hoping (good luck, says a diving friend of mine) that the weather will be sunny and hot, as I have a tendency to freeze in places that are called “lake” and “northern”. Granted that we will have a few days of early summer, I am actually looking forward to the weekend. It will be great to get in the water with other freedivers and see if my body can remember such things as a bloodshift. Hemmoor is an especially beautiful lake, with good visibility and lots of things to look at, such as a sunken forest, which is quite magical, with pike and carp hanging out between the trees as the sun filters in. There is a competitive element to the whole endeavour, too – Aida Germany still separates records set in the lake and in the sea, so although I have the record in constant weight no fins with 40m, in the sea, the record in the lake with 33m remains to be broken and will provide me with some motivation to do something other than sunbathe and swim around in mystical sunken forests. To make things more exciting, I have yet another TV crew in tow, who are doing a story for the science program “Planetopia”. As TV crews do, they are likely to expect me to break a record, and bingo! I have provided myself with pressure again. It will all be fun…pictures and videos to follow.