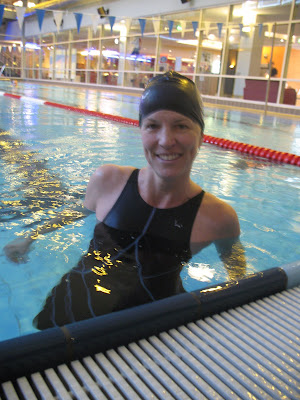 I had a much better night this time, feeling content and pleased with myself over the fact that I swam 150m on one breath, sleeping happily and deeply until 6am, when I woke up to a brief "oh shit" moment. I managed to recover quickly though, and stayed pretty relaxed unitl I started my warm-up. A brief rush of nerves during the first dry static was supressed, and I felt confident and a lot happier than yesterday until about one minute to official top, when the stray thought of "...125m?" passed through my mind, which instantly got me back to the 200bpm heartrate. This is something I need to learn to avoid somehow, seconds before it's time to start a dive. Suggestions are welcome. I pushed off the wall thinking about not tensing my feet to prevent cramp - I have managed to get cramps in my feet in no fins before, which is not conducive to a good performance. Feeling nice and relaxed, I got to the end perfectly with four and a half strokes, quite pleased with myself.

All was well until the 50m turn, when a new sensation set in: terribly heavy arms and legs! This threw me a bit, since I had not experienced this in no fins, and certainly not half way through the dive. I briefly wondered if I was going to make it like this, and started telling myself that it was definitely ok to come up early, that one record was respectable enough after only six weeks of training. This kept me distracted till I touched the wall at 75m, and got spurred on by Matthias banging on the ladder, which made me realise that all I had to do was swim to the end and pop up! As it goes, once you get to the end, you think, ok, just the turn, then you think, ok, one more stroke, then one more, then I was thinking: arms and legs are feeling bad, who knows what this means, so lets be safe here and come up. This time I was samba-free, very clean, and very happy, with a new pb and new German record of 113m! I don't know why we do these things, I mostly did it because there were so many people watching, it would have been embarrassing to pop up at fifty. Well, and maybe a tiny bit because I am stubborn. Still, the relief when I realised that I wouldn't have to do any more of this was quite enormous, to say the least. Standing under the shower ten minutes later, it slowly dawned on me that the pool world championships in Aarhus are not that far away, and that to prevent being embarassed there, I would have to continue training pretty much right away, so rather than having this seemingly endless pool-training-free strech ahead of me, it is more in the vicinity of a couple of days. "Oh shit" springs to mind.

Here is video of the performance. We did film the 150m, too, or at least we tried, but Steffen had a bad day and alternated between filming the lane markers and the tiles on the bottom - don't ask. He did a great job today though, and since stylewise I made a bit of a mess of yesterday's dive, I am actually quite grateful to him for not having recorded my nasty turns. Check out today's slow, but clean, record dive here:

Now static remains for me to work on, which will most likely take a couple of years. Never mind, it's good to have something to look forward to. Thanks for all the crossed fingers, everyone!

Jorg said…
Congratulations! Amazing performance. I will put a news item on www.shark-freediving.com
3 May 2009 at 09:47