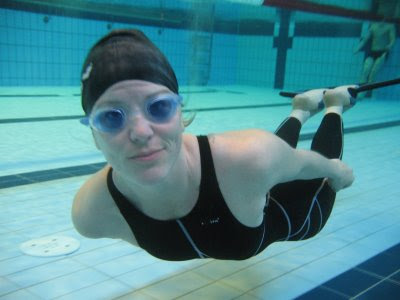 Yesterday I returned from our last training session knowing that the final chance to fix any problems was over. Fortunately, all went reasonably well and I left the gym feeling well prepared. Experience shows that this is a feeling that will gradually vanish over the next couple of days, while a sensation commonly described as “nerves” takes over. It’s the “oh shit” phase of training and lasts until I hear “five, four, three, two, one, official top” (top = time of performance, for those who are not familiar with a freediving countdown). As soon as my head is under water, everything is ok. I hope.

I managed to get back on track after the week of gloom and misery. A couple of days rest did the trick, and I felt ready to push myself again. Martin left me to go off and enjoy himself in Prague for a weekend, so I got my friend Steffen in to replace him. Steffen is a scuba instructor that I helped to teach, so I know he can handle a problem and will stay calm. At the same time, he has only recently started to do a bit of freediving and is as excited as a child with a new puppy. Coming along to be my safety and coach had him all jittery with nerves, which was rather amusing. Since static had been such a disaster, I decided I would take it easy, change things around a bit and not push myself. So I did a ‘two, three, four’: two minute breathe-up, two minute hold, three minute breathe-up, three minute hold, four minute breathe-up, four minute hold. I told Steffen that I would most likely stop at four minutes or soon thereafter. When it came to the final hold, contractions started early but didn’t feel too bad, so I carried on a bit, and then a bit more, and then it was five minutes, and before I knew it, I ended with a new pb of 5:23. Poor Steffen nearly had a heart attack, but did very well, even telling me that I was “looking good”, which he said about a minute into the hold, at which point I would very well hope to still look alright! Anyway, I was very grateful for his help and felt safe in his hands.

Monday saw coach Martin return, and we had a couple more tough sessions, finishing with a 75m DNF and 100m DYN done for the cameras of the local TV crew. After the pool, they followed me up to the gym and filmed me doing my strength training routine, which was a rather strange experience. I couldn’t help feeling a bit naff, cycling and lifting weights with a camera crew in tow. Fortunately it was quiet, so not too many people saw us. The final product is aired tonight, I will censor it and then decide whether I post a link or not. In the last few days, we have been tapering off, just doing some maintenance and relearning the turns with the fin, which I seem to erase from memory on a regular basis. Hopefully I can keep the information stored until Saturday this time. All is on track now, it is a question of eating, eating some more and resting for the next two days, or so I thought. Then I woke up this morning with a totally stiff neck, unable to move my head. An emergency visit to my physio later, I can now turn my head again, but am still very sore and aching. He says there is enough work for a few sessions, and that it may yet get worse. I am beginning to wonder whether I am destined to ever do a freediving performance in the pool while fully healthy? Anyway, there was some saying I heard along the lines of: “suffering is inevitable, pain is optional.” It’s all in the mind. Still. Mine will be a nervous mess come tomorrow lunchtime.

Wish me luck everyone!

Elisabeth Müller said…
I'm sorry if I've put any kind of pressure on you, Anna, but I knew you had it in you. I'm very happy to have been right! Big congratulations on the dive and best wishes for tomorrow.
2 May 2009 at 11:54