My lovely training pool (We try to avoid the aquafitness classes) 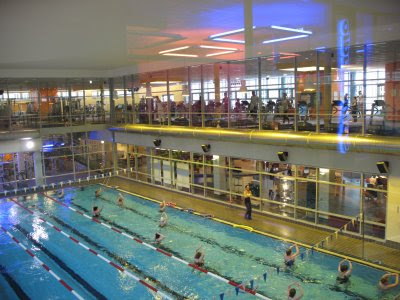 The last three weeks have passed in a blur of training, working, eating, sleeping, training. It’s almost like Dahab, except for the ‘working’ bit in there, and, minor detail, the weather. Although, even we poor white, white people in Berlin have seen the sun for three days now. Not that I get to see it much, since I spend most of my time in the pool or the gym.

Coach Martin and I thought it might be good idea to start the mission with an honest assessment of the situation, to find out if I could remember what way round the mask goes on. In the first three days I did three max attempts: static was surprisingly alright with 4:33, and dynamic even better with 100m, only 14m short of my pb. The real surprise came when I decided to just keep going in dynamic no fins and ended up clean at 80m. This was only my second attempt at this discipline ever, so I felt I was off to a good start. I was soon brought back down to earth when Martin told me I had taken between six and seven strokes per 25m, and that he had suffered with me the whole way. Apparently, even five strokes are too many. Tell that to a non-swimmer like myself. What do I know? I just swim along, kind of. I think this was the moment where Martin saw what his role in this endeavour was going to be. He embarked on becoming the coach with the whip straight away and launched me into a technique training regime which I suspect is heavily inspired by his sessions with the Aarhus crowd. He tells me that the look on my face when he informed me that I was going to do four times 50m no fins without any warm-up, while still panting from the 600m swim, was priceless. Several sessions later, I have realized that 50m plus a turn is standard stuff that can be done anytime. It’s all in the mind, or most of it, anyway. So far, we have managed to improve my dreadful no fins technique and strokes have come down to four per 25m. I am now experimenting with four and a half, mostly because it is nicer to reach the end with arms outstretched, ready to do the turn, and also to improve my speed. Compared to 39sec/25m I am now down to 33sec/25m, which feels good.

Help with monofin technique, which is even worse than no fins, and yes, that is possible, as those who saw me in Egypt will be happy to tell you, came from Martin’s girlfriend and wicked freediver Elisabeth Kristoffersen. When she swims with a fin, it looks graceful and effortless. When I swim with a fin, it looks like hard work. First of all, she gave me various exercises to loose the stiff back and get the movement flowing through the body, while ignoring all other mistakes. This worked, since I stopped trying to focus on lots of things at once, and therefore getting none of them right. Then she made me swim with my new Glide Monofin, and although it’s a bit more work, the sense of shooting forward through the water with every kick is very nice indeed. I am beginning to see that this fin will take me to new places. To round things off she made me do a few sprints, although sprinting is maybe not the right word for what I was doing. Trying (and failing) to swim fast got my mind so much off technique, that a few things fell into place and when we analyzed the video afterwards, the whole thing did not look quite as ridiculous as before. There is hope. To let Elisabeth have the full experience, we dragged her to the gym afterwards to do weights, and then, my favourite, to the 70min interval spinning class I have been going to as part of the training schedule. Talk about anaerobic! To make the legs even more lactic, songs like Pink: Sober and Lady Gaga: Pokerface are perfect for holding your breath during the chorus. It’s a sure way to draw attention to yourself in the gym. I was getting nervous looks from my neighbour, who was obviously convinced that I was about to keel over any second. I think he might have been planning the CPR, just in case.

With Elisabeth Kristoffersen, in the gym: 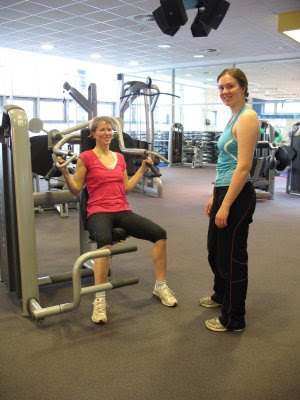 Static sessions in between have been varied. A 5:01 was a highlight, but still far from six minutes plus – I think I might have to start packing. A few exercises with Elisabeth and a straw have pointed me in the right direction. I’ll report when I have beaten my pb of 5:08.

Some people have been asking me how exactly I am training, so here is an idea of what a session might look like, although these vary from day to day.


Evening: go to bed at ten and pass out.

Repeat as often as you can (or untill you are dizzy from the CO2).

(3x4min with little recovery.)
add 10 seconds next time if you can make it)

Awesome challenge you have set yourself.more pix too.I'm following with interest.
10 April 2009 at 02:45