This year I set myself a special freediving goal: to explore. I found that with training and competing in the same places all the time, I have been missing the surprise of the unknown and that it was time to focus on the experience rather than competition for a while, and on putting myself out there in this wild world of ours. Having made a start of this with a trip to Dean's Blue hole, I decided to continue in a place I have been meaning to dive for some years: lake Walchensee in my home, Bavaria. Surrounded by mountains on all sides, it lies at an altitude of 800m, and has a sheer wall dropping down to an incredible depth of 196m. It is one of the most beautiful places I know. 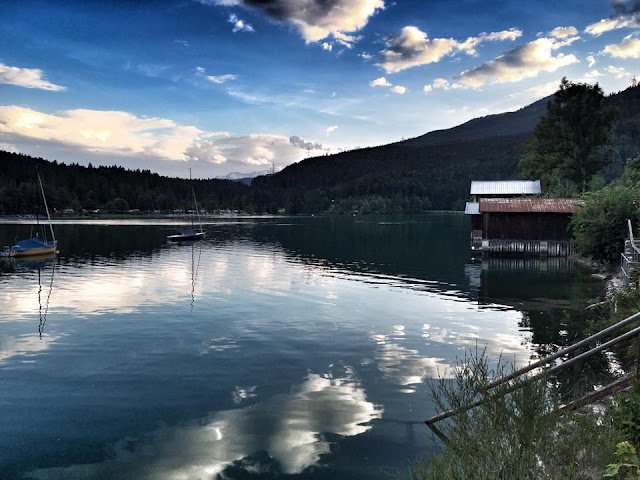 My friend Frank Bittner runs the freediving school Apnea-X there (http://apnea-x.de), and together we made a plan for me to spend a week diving with him. We threw in a fresh water record attempt on the sled (Germany being the only country to still separate records done in fresh water and salt water), mostly to give me a bit of a focus rather than for ambitious dives, since there was not enough time for me to reach sled diving depths that would be significant.

Excited beyond anything about this project, I soon discovered that it would be a special headache, starting with packing: diving cold water, hiking, running, regular exercise, potential for sunbathing and having to be prepared for any kind of weather made me even more unable to make sensibel choices than usual (five beanie hats to go to the Bahamas, is all I will say). I resisted high heels, but loaded my poor car with pretty much everything else, including life saving kitchen utensils! And before you ask: yes there are such items. One of them is called Espresso maker. 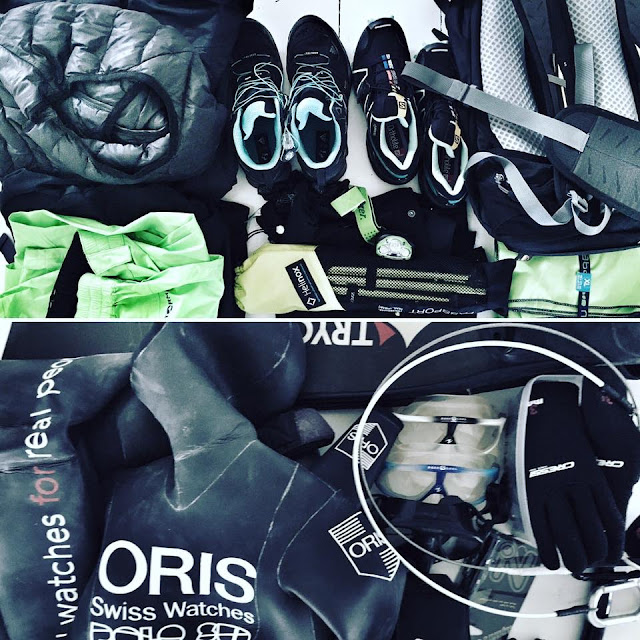 In usual Anna-luck style, I arrived at the lake in a summer heatwave, but should have known it couldn't last. 31°C had me in my shorts and flip flops, and the first two days went by in pure pleasure. I found that I needed no time at all to adapt to the water - bearing in mind I hadn't so much as thought about holding my breath since early May - and swam straight down to 54m with my monofin on day two, which is where the end of the line happened to be. Opening my eyes, I discovered the magic of this place: there is zero light down there, it is a darkness complete and overwhelming in its sense of vastness. This alone is not unusual. What is unique is the incredible clarity of the 6°C water at this depth. I saw the line and bottom weight in front of me in the beam of my tiny but powerful LCD masklight. Beyond, blackness, below, blackness, above, blackness. Knowing I had 50m of water above and a wall dropping to 100m below me made me feel as if I had opened my eyes and found myself in space. Alone. It was instant love. 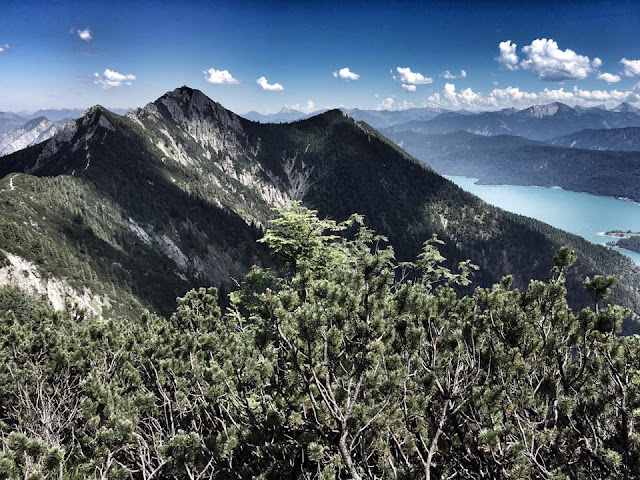 To round off this day, I then went on to go on a four hour hike/trail run in the afternoon along the ridge of one of the most beautiful places in the alps. Looking at the lake from up high, having just been down below its surface, was a special moment and one will cherish for a long time. Hopefully I will forget the aching feet soon! 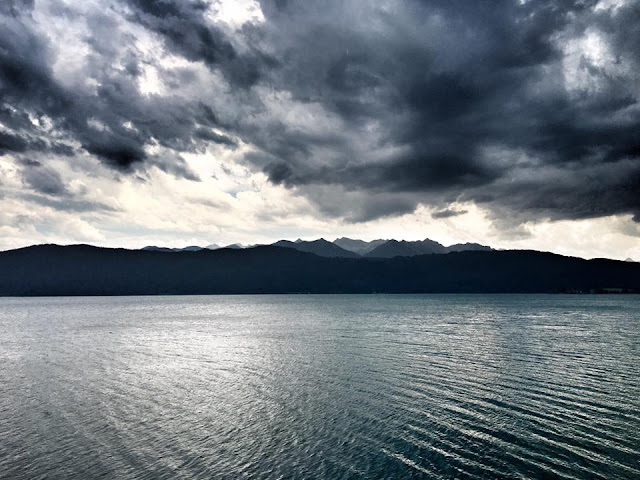 The need to bring all my clothes became apparent by Monday, when we started the traditional Anna-luck cycle of storms that had us landlocked and killed all diving for a while. Raging thunderstorms and driving rain not only washed sand into the lake to reduce visibility, but also dropped the air temperature from 30°C to 8°C in a matter of three days! Add to this a battle with technical problems, and my record event was starting to look tricky. I was antsy to dive since I had enjoyed the depths so much at the start, but you have to take things as they come around these things. One of these days I will start to meditate, after all. Omm. Ommmmmm....! 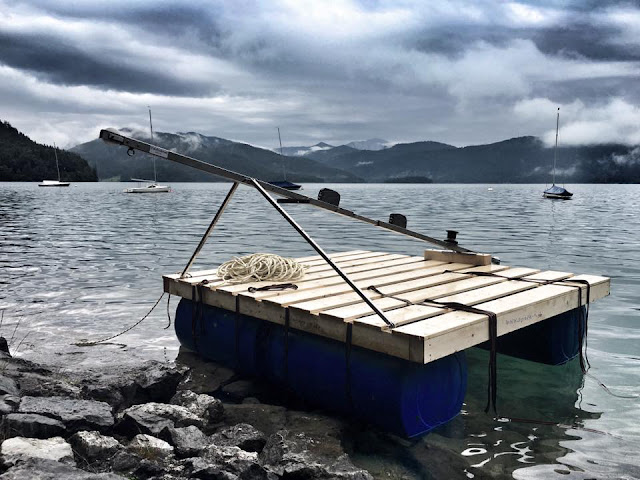 This weather had me looking at a record attempt with zero training. Luckily, two of my longest freediving friends showed up to help make things happen: Katya and Antero, with Katya judging and Antero there to offer surface support. Together, they helped Frank iron out any final technical issues on the set up, so I was able to announce an official variable weight dive to 60m for day one, the only depth that could safely be chosen considering the circumstances. 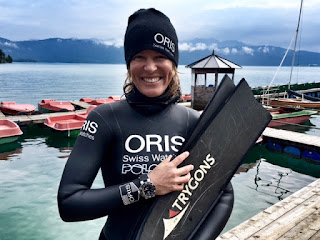 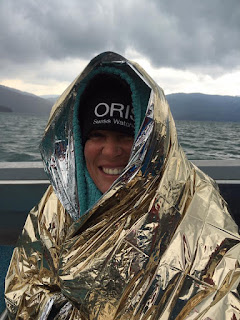 As is customary on my competition dives or record attempts, the weather continued to be as wild as anything, with freezing rain - in July! I was looked after well by Katya, Antero and a truly excellent safety crew, including the Walchensee search and rescue team and doctor Anna. They wrapped me in a golden tent to keep me warm and sheltered from wind and rain, until it was time to whizz down into the eternal night of this mysterious lake. Day two saw us still with clouds and chilly conditions for my 70m no limits record attempt, but mercifully without rain. Both dives were easy and fun, with the experience and sense of exploring much at the forefront for me. 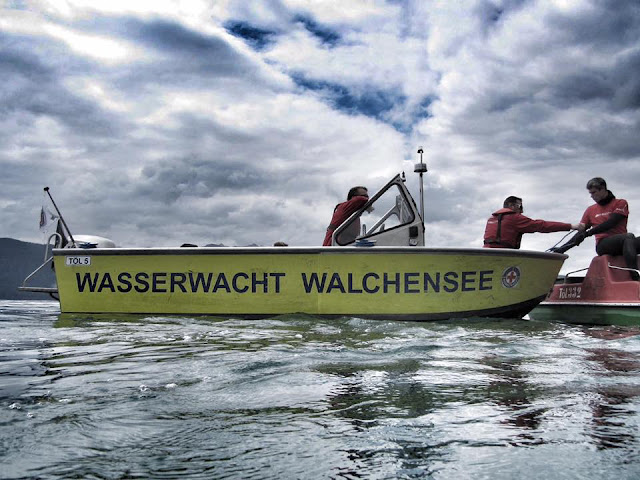 One of my favorite moments was rescue crew member Alois telling me - with a surprised look on his face - that he had expected me to be doing yoga for ages in the back of their boat and no one being allowed to talk to me! I suppose my allergy to all things yoga and the fact that more than anything, I like to laugh before a dive, has now spoiled their image of a serious freediving athlete for ever. I am serious, guys, I am, I am! Honest! The athlete bit is rather (wide) open for interpretation, though. 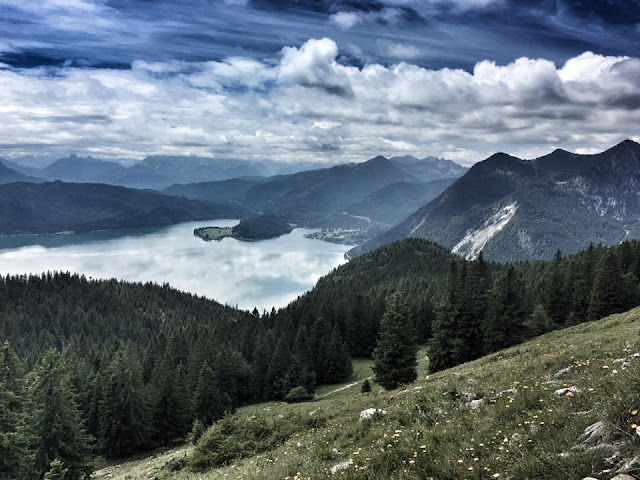 I ended the trip with a final climb before getting into my car to drive away - but plans to return were forming in my mind before I had gone around the first corner. Sometimes the wild, challenging environments are the most beautiful ones, and more adventures are to be had in this special place.

It was so good to be back in the home of my heart! I will not stay away for long.