I've been off-blog for a while, so just a brief note on the worlds: they were not great for me, as for the first time ever in a depth world championship, I turned early. Unbeknownst to me, I was in bronze medal position, but I was sick with flu and had mentally checked myself out of the dive. I simply lacked the focus to get it done. A new experience. Can't say I liked it, but I suppose it's part of every athletes journey! I did fool around with Daan Verhoeven though, to get some funky pictures: 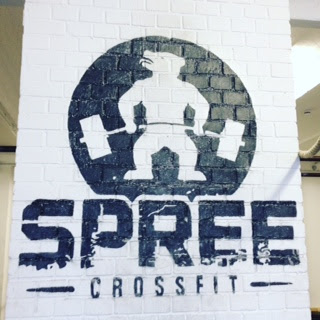 Back in Berlin (after a detour across some mountains, pure magic) I've thrown myself into Crossfit, asking Nico of Spree Crossfit to recommend one of the team to be my personal coach for the next months. He set me up with Sebastian Werner, who (fortunately) has no idea what he is getting himself into - best not to introduce him to evil coach Andrea, or he might reconsider whether he really wants to do this!

Sebastian started me off with a relatively gentle session, and had me thinking: well this is nice. He was probably just getting me comfortable so I wouldn't run screaming for the hills after the first fifteen minutes - now he has me hooked and it seems the nightmare is about to begin. In fact, during our last session I strongly considered giving up my lunch right there in the middle of the box.

I have already noticed one thing: if I (blond, I know) mention at all that I don't like/can't do/am rubbish at something, this very exercise/skill/nightmare appears instantly. Between two repetitions of squats I somehow (blond, see above) told him that I am incapable of doing box jumps (you have to jump onto a box, heights vary, standard are 40cm and 60cm). I went to great lengths to explain that I was physically unable to jump, as in, genetics, and that it had always been like that, even back in school when I played basketball. He listened to my expert reasoning, went off to get a 40cm box and made me jump on it. Now, this might seem like an easy exercise, but I tell you: mentally, to me, it was an unscalable cliff face. I was terrified to catch my toes and slam forwards onto the box, and certain that this very thing was going to happen.

So here is why having a coach who suits you and understands what goes on in your head is one of the best investments you can make. It took Sebastian less than three minutes to have me jump onto the nasty thing, something I had avoided so far at all costs, having firmly convinced myself that it was impossible. As soon as I was up on 40cm, scary enough as far as I was concerned, he came back with the 60cm one, pushing my mental boundaries. He could see that I was physically capable of getting up safely and that the barrier was just in my head. This is when you know if you have the right coach - although everything in me said: "impossible!" I trusted him and discovered that although challenging, it was no problem. It took my new devil coach all of 10 minutes to cure me of a conviction that has been limiting me for years. It was our second session together. As an instructor, I love inspiring this kind of trust in students, but I also love giving it to someone myself.


So. If you want to get ahead, get yourself a trainer to get you out of your comfort zone in the right way. In the water, I could trust evil coach and angel coach to do this for me every time (coach Martin in the pool!). On the mountain, it's snowboard guru Joerg Egli who has made me carve down pitches I felt impossible to ride. Now I can add Sebastian to this crew, who I reckon will push me to new levels of fitness - and be known as devil coach henceforth!


Something tells me this is going to hurt - I apologize in advance for any vomiting I might do in the Crossfit gym. It's not my fault. I have a devil coach!