Right. 2015 is here. No one knows why these new years always come as such a surprise, and always so suddenly! Mine came with the - totally unsurprising - traditional four week sinus infection, as usual messing up all training ideas. I might try a new approach and just eat chocolate for the entire month of January 2016! 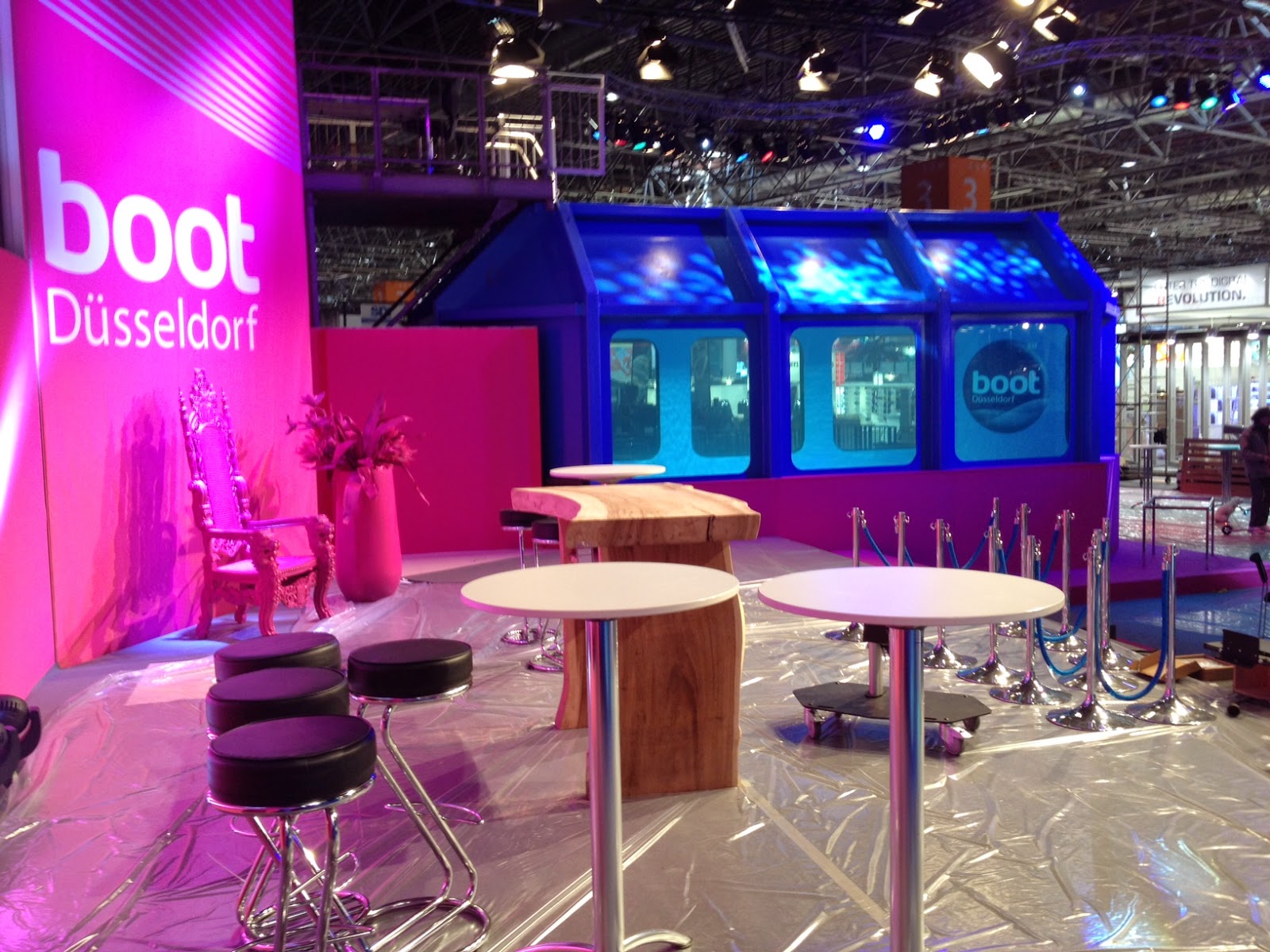 Fit or not, a new challenge was around the corner for me: my first ever job as a presenter. The crew responsible for the organization of the annual BOOT trade show (the biggest watersports trade show in the world) had decided to book me to be stage presenter in the diving hall for nine days although I had zero experience. Fortunately, I was only the second presenter, and able to watch closely what the proper professional was doing - taking the lead from Ingo Meyer was a very good plan, since he is hosting all manner of events including surfing and kiting world cups and working as TV sports commentator. The days were hectic with a schedule calculated by the second to fill the hours between 10:30 and 18.00. Note to self: drink less coffee next time! In fact, best drink nothing at all.

My favorite challenge of the week were the German navy divers who came on stage twice per day to present their three divisions. Novice presenter that I am, I asked the obvious: what exactly do the navy divers do? and was presented with a staggering range of military speak. It took me a couple of days to get through to the real information, e.g: they sometimes dive for miles/hours to get themselves and their gear unseen to a location - the audience that is used to paddling around the reef for 45min or so suddenly woke up! Ha. Since I like having a target to aim for I decided to work on making those guys lose their serious look a little more each day, something I started to succeed with when I discovered the best tool ever in one of the videos they were presenting: an underwater chainsaw! Amazing! Instant attention from all the men in the audience guaranteed. I did my best to make sure they were all storming the navy diver stand after each presentation. 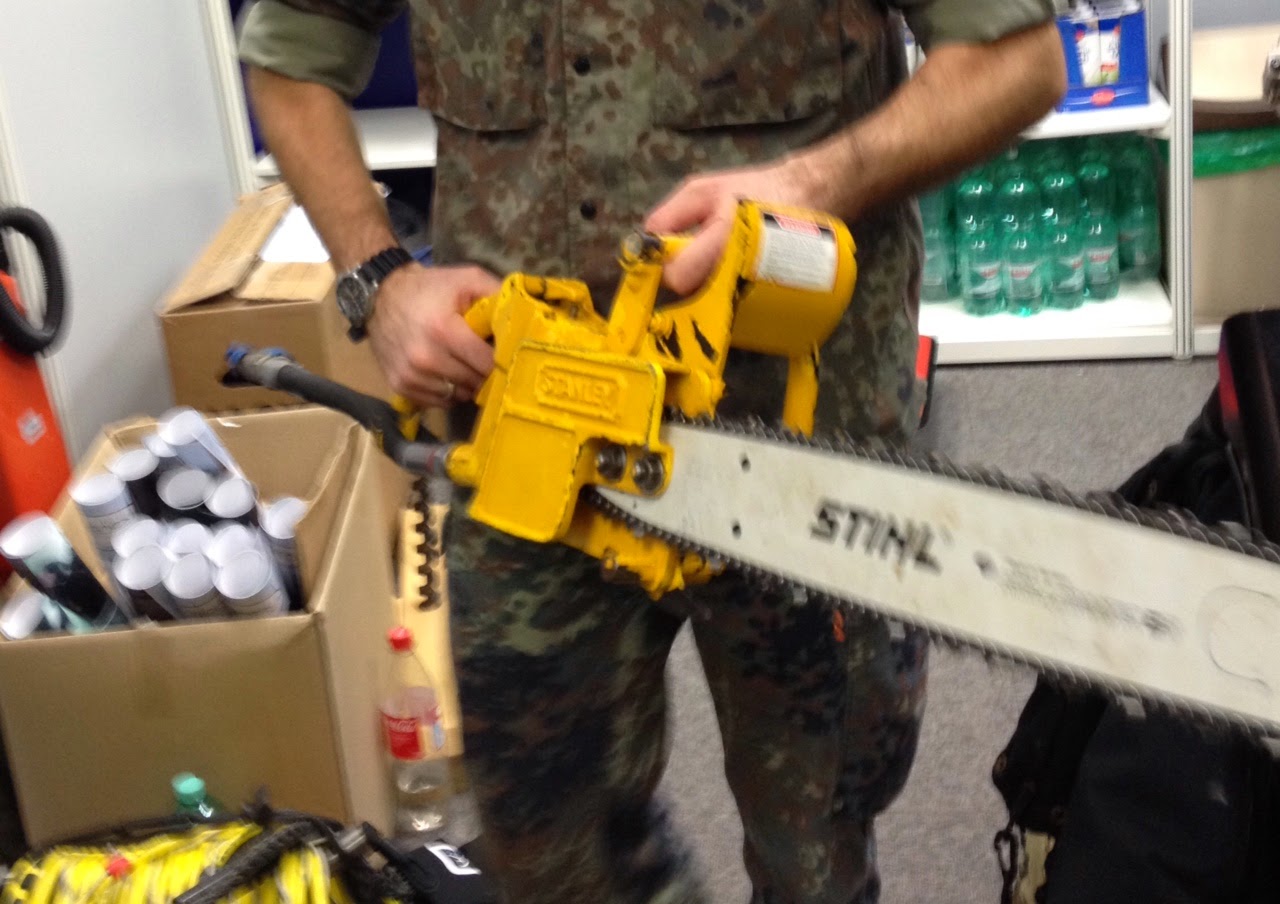 A highlight in our 4m deep diving pool was a helmet diving suit. When I first spotted it, I had nothing better to do but to open my mouth (no surprises there) and declare this to be one the few things I have not tried in diving. Immediate result: the guys started planning to put me into it! My busy schedule (barely any time for toilet breaks) did not deter them at all. I was thinking, hell, this could be fun - until I was told the whole thing weighs 80kg, and that the challenge included me having to climb the stairs to the diving tower myself! A brief oh-shit-moment was followed by: if I don't make it - who cares? Until the exhibitors party, that is, when one of the guys told me that bets were being made on whether I'd get to the top, with some of them betting against me! Outrageous! Did I mention? Oh SHIT! 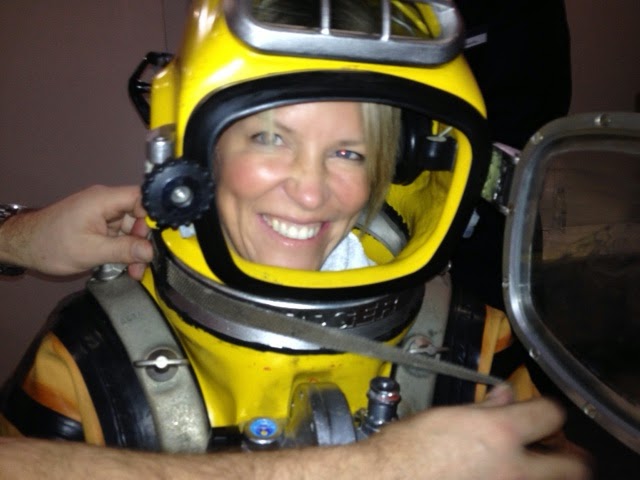 The morning came on the busiest day of the entire show. A brief thought of sports clothes was discarded for: why? I'll be dry - after all, it's a helmet suit! Climbing into it with my jeans soon showed the flaw in the plan: the men are a touch bigger than me, so there were, in fact, no seals on my wrists. Anyways, minor details, a bet was on and I was going to get up those stairs come hell or high water!

Since I was trained on trimix years ago by former UK navy diver Aaron Bruce, I firmly believe that planning is key to any kind of dive. This does not start in the water but well before, and includes such things as figuring out how to get your big ass and your gear to the divesite. Just in case the 80kg suit was going to be too much, I'd recruited the diving area crew to be on standby and help push me up the stairs if needed - what you don't have in your legs, you best have in your head, after all. Still, what self respecting girl can let a bunch of guys bet against her! This is were all the squats and burpees I did last year had to finally be of some use. 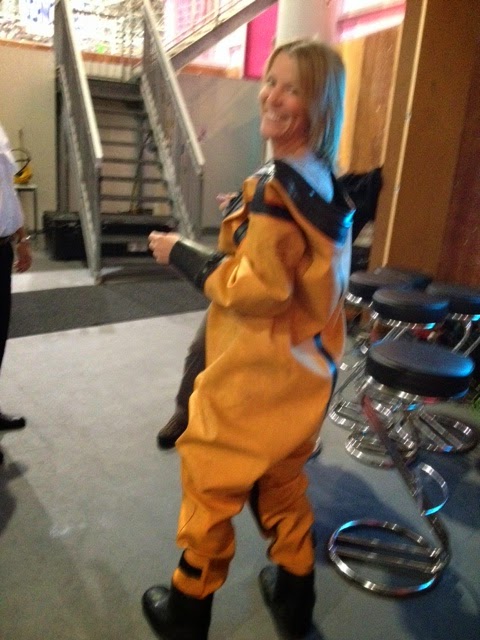 Climbing into the suit, it was hard for anyone around to keep a straight face, including me. This is what I used to call a man-proof-overall when I was still riding my Ducati around London: when wearing one of those, there is absolutely no danger of men getting any ideas. Apart from the size of the thing, the non-seal-wrist fit and the fact that they put a helmet on your shoulders that weighs 64kg, the boots were the biggest challenge. They weigh 7kg each, which is not such a problem in itself, but becomes pretty complicated when you have size 38 feet and the boots are 46.

Finally it was time to get to it and start climbing. The weight was actually easy enough, although I did notice that the man who's suit I was in cheated a little by not putting the chest weight on me until I was at the top - I reckon it's around 10-12kg. You're a true gentleman, Mr F! Biggest problem was trying to balance the boat-like 7kg boots on my toes to lift them up the steps. Climbing down the ladder was a bit special for the same reason, but once in the water, it was brilliant! 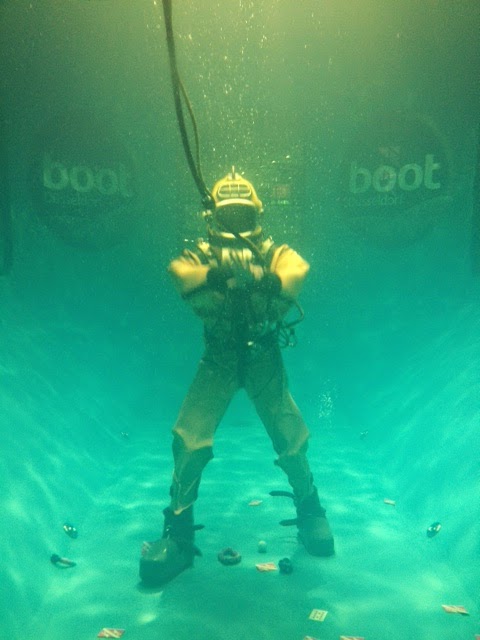 Of course, the water started to rise up the sleeves right away, but I figured I had time to hop around until it reached my upper arms. It's odd but funky to simply breathe with no regulator in the water, and just as well we had no radio connection, because I was laughing away the entire time. I felt quite heavy - I suppose I might not need quite as much weight as the usual wearers of the suit - and decided to let more air in to see if I could do some bigger jumps. Turns out this was a very bad idea, which I recognized when I nearly could not reach the valve in the helmet any more which you have to push with your head to let the air out! Failing to pay attention will send you straight to the surface, helpless and looking like a right fool. I saved myself - just! Phew.

Time flies when you have fun and with the water in the sleeves nearly up to my shoulders it was time to get out - standing below the ladder it came to me that all my planning had been terribly flawed. Blond moment! The only way to get out was to leap off the bottom and reach up to grab the ladder, emptying all the water from the arms into the legs. I might as well have sat in a bathtub. Still laughing I climbed out of the suit and prepared to go on stage with a pair of sweatpants borrowed from the diving tower crew. By the way, thank you kids, you were all great!

My first moonwalk! I loved it! Next time, I will bring tape for the seals and do some somersaults. And climb the stairs with the full 80kg.

Note to self: prepare for the BOOT show 2016 with heavy backsquats!