I’m back home and glued to my desk in the bookshop, enjoying the beautiful autumn days in the city, coming down from the epic closing party and getting used to not putting on my wetsuit every day to head out to the ocean. 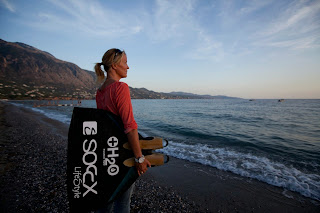 
The 2013 WC was a rollercoaster for me. As if the injury wasn’t enough, I ended up losing two nights of sleep in a row right before the constant weight competition day. This is a special story – some pretty crazy stuff in the room next to us had Liv and I still awake and high on adrenalin at 03:00am, calming ourselves down by drinking beer in reception, which the sympathetic security guard had gone out to get for us. Not quite the right preparation for an 81m dive, with the uncertainty of how the pain from the fresh stitches would affect swimming up from depth. Luckily I had Liv, who was a brilliant partner in crime and, when it all went way too crazy moments before I had to put on my wetsuit, just said to me: “Anna. Just go to your happy place. Happy place, happy place..!” Someone should have been there with a camera – you could not have scripted this if you’d tried! 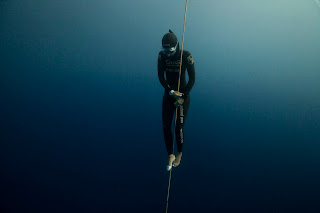 photo: Dann Verhoeven
I was pretty stressed before the dive, but once I left the surface, I remembered that I was ready and the descent was amazing: constant pressure on the ears to 81m, diving with a mask, and a certain feeling that there is a lot of room still. Swimming up was no breeze - being tense because of the pain gave me cramps in both legs starting in around 70m – but there was no way I was going to quit and I surfaced only a few seconds off my usual speed. Admittedly, once I was given the white card (fifth place and my 26th German record), I may have yelled “get me off this f#@*g line, I have cramps!” instead of smiling sweetly at the judges. Oops - sorry judges, and sorry Liv! 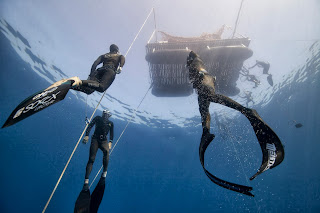 photo: Daan Verhoeven
If constant weight was the challenging dive under the circumstances, free immersion was a tactical decision – getting the announcement game just right: 73m put me 1m ahead of Aurore Asso from France, left me with an easy dive and landed me with my third Bronze medal in as many world championships. Groundhog day or what! Thing is, this was also a dreaded moment for a very special reason. Coming across a shop filled with incredibly dodgy sparkly dresses earlier on, Liv and I (we are claiming temporary insanity) had made a bet: If either of us should accidentally win a medal, she’d have to get a truly awful outfit and wear it at the final party. Who could know that we would BOTH get medals? Who??? Evil coach was having a field day, and with our brains fried by too much leopard print, we forgot to confiscate his camera. I have a feeling we are never going to live that one down - NEVER. Guiliano from Polosub even offered to make me a leopard print wetsuit…oh noooooooooo! 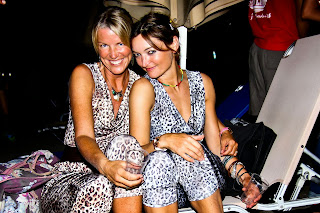 It’s always a little weird being back from a world championship. It takes so much energy, focus and luck for everything to work out, it’s a bit like living under a bubble. I still have a tendency to feel that my medals and record competition dives are some kind of lucky accidents, but I suppose with yet another medal, it may be time to start to believe that I’m not doing too badly. Then again - this one might just have been Murphy’s law forcing me to wear leopard print for the first (and last…) time ever! Evil coach has been making plans to get me into silver or gold medal outfits - imagine....oh no....

I think I will have to quit the sport before the next WC.