First things first: after two and a bit weeks of training, I tricked my coach who has been taming my (typical freediver) desire to push for more depth - focusing on building strength and adaptation instead - ignored my depth alarm which was supposed to stop me in 75m and sailed to the plate to swim 80m back up. The next big number! Feels good to have done a pb and thanks to all the pain in the gym and to the evil coach training approach, it was a nice and easy dive. Hurrah! 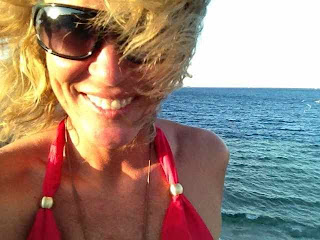 Since evil coach is merciless, he put the 75m I did not do yesterday on the plan for today. Going out there, it soon became obvious that today was simply not going to go according to plan: I started the session with contractions after 42sec on my warm-up. Next, I went to sit on the pool noodle, ready for my dive, lanyard clipped on, only to realize that I was not wearing my mask. It was still safely on the platform. Having rectified this small mistake, I started the descent, only to be hit by a massive contraction before the freefall, losing the mouthfill and turning in 65m. Needless to say, I did not enjoy the way up either. Even evil coach saw that I was a liability and suggested some repetitions to 30m without weights instead.

After a bit of rest, I slid off the platform only to realize that the seam of my pants had produced two holes: one on the back of my upper thigh, one on my right bum cheek. For a very good reason, kicking was now out of the question, opening the holes any further to be avoided at all costs. The boys suggested that they would look the other way, but I was having none of it! After some discussion, I agreed to do some FIM dives, testing my new weighting. Preparing for the dive on the noodle, the mask fogged up, so I took it off, cleared it, put it back on and thought: "hmmmmm...I was sure I had my snorkel..." Looked down to spot snorkel leisurely sinking away in 15m. Took half a breath, leapt off the noodle and swam after it. As it was also drifting along with the current, ended up doing constant no fins to 20m together with a dynamic no fins which had me surfacing on the outside of the other platform, where evil coach was busy fixing the sled for Will. Faced with my explanation as to what I was doing there, he shook his head and said: "Ok - you are going home!!"

Back at the center and safely out of the water, I made Will laugh with my tale of chaos diving. He headed off to train, I headed off to remove my suit in the shower (which happens to be located out of the backdoor of the center and down a corridor, under the hotel swimming pool). Stepping out, I realized that I did not have my towel. I did not have my bikini. I did not have my shorts. I had nothing but my suit with the torn pants. Made a dash for the center changing rooms, half hiding behind my wetsuit, fortunately without encountering the Egyptian cleaner, and thought: phew! This has to be it! Got dressed and took my banana, milk, water bottle and spoon through to the table to have breakfast. Realized I have left my muesli behind. Got up to go fetch it, picked up my iphone, went back to the table, sat down, picked up the spoon and thought: something is missing.

Muesli was still in my cupbaord. Had my iphone instead.

Have gone home, locked the door and will not leave the house - for NOTHING!!