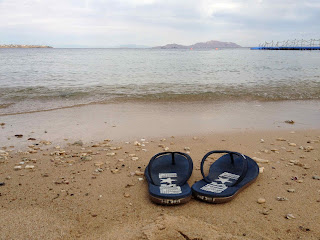 It took three weeks to finally be well enough to get in the water. Evil coach, bored with his sniffling athlete, went off on HOLIDAY - shocking - and left me all alone with his new member of staff, Sergio. Left to test our (well - my) silly ideas, we went right ahead and destroyed ourselves so thoroughly with the TRX, we were both unable to walk for four days, with the stairs to our favorite coffee place becoming a major hurdle.  I added sprint intervals on the spinning bike and monofin swimming in the pool, and started to feel nicely tired instead of grumpy, restless and miserable.

This was followed by decent constant weight training when I was finally able to clear my sinuses. The time for a gentle start was past, so I jumped straight to repetitions, with dives up to 65m, 55m, 45m and 35m in one session burning whatever energy I had left after the TRX. It was beautiful to see the ocean and Luda Barracuda again, even if Murphy's law has provided the worst weather - as soon as I get in, a gale starts blowing and massive waves come up, leaving me banging my head into the platform while trying to relax, and as soon as I get out, it all stops! At least it's making my training extra efficient: nothing much will shock me any more. Think positive! 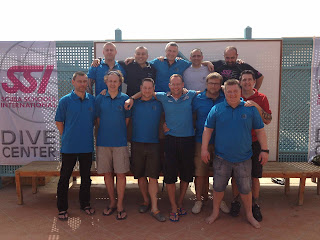 In week three I headed to Hurghada, to spend two days with SSI International Training Direktor Ronny the Kaiser Kain at his Instructor Trainer Seminar - the idea being that it is important to meet and share our knowledge ever so often. At least that was my excuse, while the true plan involved drinking a couple of beers and hanging out with people who know nothing about noseclips, monofins, mouthfills or similar. 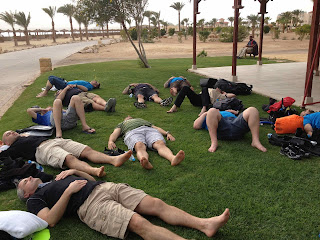 I arrived in time to give the ten guys a tiny introduction into freediving - strangely, they all listened attentively and then proceeded to drop at my feet! It was not me, I promise, I was nice to them! I believe there was a sense of nervousness around regarding the dynamic required to pass the course, so they were all up for testing a few minutes of freediving breahting skills - anything to give them an extra couple of meters, I guess! Of course, watched over by me and Ronny they all did their swims easily enough, in a wide range of unorthodox styles - we'll fix that next time, guys!

Now I'm back in Sharm, and it's time to work equalization and see if the reef in 100+ meters ist still the same.