As usual, winter break has been going on for some time and has involved such things as laying down (very few – sniff) carves, the BOOT dive show, Coronas and a recent static that produced contractions after 32sec. Imagine!

I like to try radical new ideas, so I contacted my magic diving/sports doctor for a health check BEFORE starting the freediving/bikini season in March. This was met with instructions to bring along sports clothes for the spiroergometry. Translation: you are going to cycle until you either vomit or fall off the bike. Not at all the nice, simple blood test I had in mind! I tried to get out of this by whining that the only exercise I had done recently involved lying on my sofa. Evil doctor was having none of it and simply told me to bring the sofa along, since they like to test their athletes in their natural environment.

First question he asked was when I was going to Egypt. When I told him I had a whole month, he started laughing. I pointed out to him that at least I came BEFORE diving this time, which, after all, is an improvement of 100%! He looked underwhelmed and was equally unimpressed by my concept of a winter break. Shaking his head, he said: what would happen if you actually trained? I feel it’s best not to go there - training (unless it involves my sofa) is overrated, anyway. 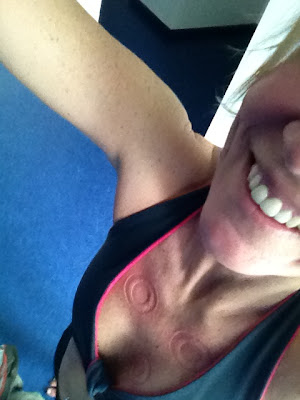 Showing no mercy, evil doctor put me on the bike, with the words: it will all be fine. I’ve heard that one before - usually before they stab you with a needle or some such unpleasant thing! After attacking me with some octopus-like sensors, (he promised the marks would last two weeks) I was made to cycle UPHILL for what felt like ages and ages. I viewed the occasional “very good! This looks VERY good!” with suspicion. After all, I know full well what I tell a student who is looking like he will die at 40sec in static. In the end, my legs gave out before I keeled off the bike, which I felt was a victory. It appears that I am – a miracle – above the general sofa expert fitness level. No one can understand how this is possible, but I was pleased to see that my anaerobic threshold is fairly low, and anaerobic capacity decent, so the occasional breath-holds during my spinning class may have been a good idea after all. Even if all the others in the group think I’m completely weird. Which, I suppose, I am.

Then I learned why it is a good idea to visit evil doctor: he told me how to train in the next four weeks! How useful! I admit that the whole thing was kind of fun. There is just one flaw in the training plan: I have to get off my sofa! Oh no!