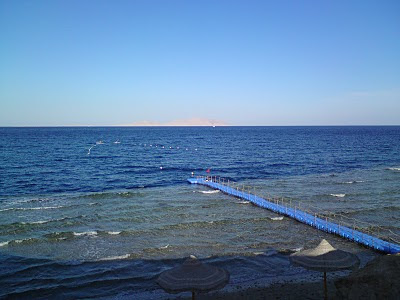 Spring is here, diving season coming and as usual I had a bunch of funky plans, which involved water, depth, dive response, swimming down, etc, etc. Everything was organized, timing was perfect. I made those plan thingies last March, too - then it was all about training for a 100m dive. Last year the ash cloud ruined it, this year a revolution messed it up. I hate to think what it will be next spring? In any case, in terms of productive results, I much prefer the revolution. It appears to have calmed down, so I set out to pack my bags and face the biggest problem a female freediver has to deal with when going away to train: how many, and which, bikinis to take? 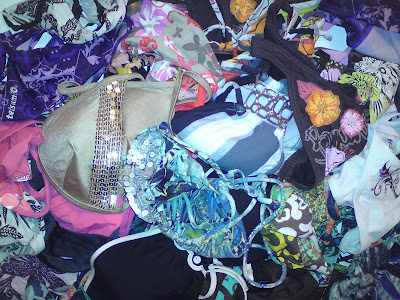 The answer to the first question is, of course, there can never be too many. Problem is, we need to also pack two wetsuits, a heavy monofin, several masks, a lanyard, 4kg of weights, neoprene glue, silicon grease, cute beanies (it's still cold!) many pairs of flip flops...endless. And there was no one around to help with the bikini selection! Suggestions are welcome and will be noted for the future - choice, see above.

I arrived in Sharm feeling spaced out, since I had celebrated the start of serious-training-season with one last proper night out at Würgeengel (a Berlin institution), where I believe I may have consumed a fair number of beers. I went in the water the first day, and was surprised by a new nasty feeling: every contraction sent a sharp pain shooting from my shoulder up into my head and down my left arm. Beautiful. Of course, something like that does not appear out of nowhere, and one might say I should have paid attention to it earlier. It was the direct result of me doing this: 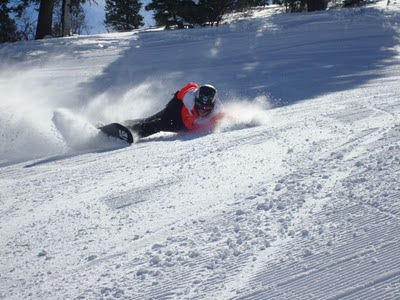 all day every day in Aspen, Colorado in February. Apart from nearly freezing out there in -34°C, I also missed seeing an enormous bump that was hidden under a pile of fresh powder and had a monster crash, giving myself whiplash and whatever else in the process. I ignored the fact that I could neither move my head, nor rotate, nor move my shoulders and carried on riding every day. Impossible not to, with such beautiful conditions! Then, when I got home, it seemed to be more or less fine - or so I thought. Until now. Fortunately, I have been exceedingly clever in my choice of training partner, and the lovely Will, who is not only a world class freediver, but also happens to be an ostheopath, flexed his fingers and proceeded to go about fixing me. "If you feel like you've been hit by a truck when you wake up tomorrow, don't be surprised" he said. Quite true, as I was to find out the next day. I thought diving might be relaxing, so I went out to safety Tyler and play around. I changed my mind when I was on my way down to do a hang, and the first contraction hit me at five meters - after - get this - 26 seconds! I believe that is a personal worst, and possibly a world record. It is also just WRONG.

In any case, day four today, and although still sore and achy, I have made it (accidentally) to all of 41m. It felt kind of hard. I am currently asking myself: how on earth did I ever get beyond sixty?? It must have been a dream.

Good thing is: it can only get better. Right?