Once again, I was invited to the BOOT (big watersports trade show) in Düsseldorf by Scubapro. I’m not entirely sure what they want with me, but they seem to think it's a good idea to let me get up onto the (pleasingly pink) stage and talk to people about freedivey things.

I had only one tiny little problem with the whole thing: on Friday afternoon, at 3pm, I was still on the slopes in Wolkenstein, Dolomites, wearing a very bright new Pure Boarding team jacket and laying down the last carves. The jackets are infused with a magic property: they instantly improve your riding. Reason being, you glow so brightly, everyone stares at you when you come down the mountain, so you best look good while your doing it! 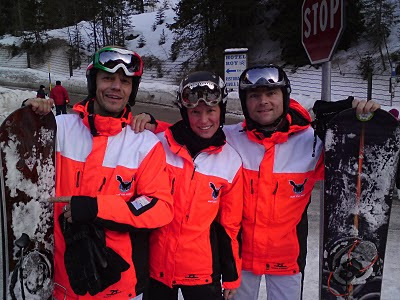 Now. At 15:00 I legged it off the mountain and jumped into the car. I had it all worked out: THE MAN was going to drive as far as Munich, a three hour trip, while I would sleep. I would then leave him at the airport and continue on to Düsseldorf, feeling refreshed after my rest. Clever plan. Unfortunately, the Austrians stopped us for speeding, and THE MAN thwarted the clever plan by not having his license, and although I averted a 500Euro fine by looking shy, repentant, and VERY innocent (as usual), they forbid him to drive anymore, so I had to drive all of eight hours after snowboarding all day and partying the night before. Arrival: 2am. I need a better plan for next year.

I am beginning to quite like the BOOT, and enjoyed it even more this year since I had freedivers to support me amongst all the bubble people: Lotta and Linda turned up and where forced to sit at the SSI stand all day every day. Here is Linda, deeply absorbed in important work, which is why she did not manage to give me the finger when I took this picture: 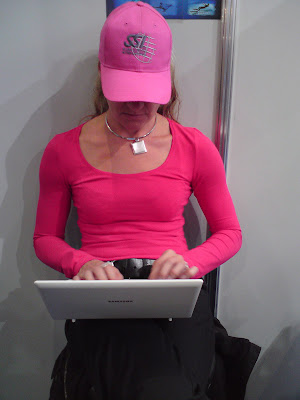 She came straight from SA and was shocked by the German winter. It is getting kind of cold, so much so that even the regs freeze on the spot!! Bet they still work fine, though - I have to say, and this is the honest truth: all the fancy tech diving regs I ever owned either blew up, froze, started freeflowing, or had bits falling off. ALL my deepest dives were done with the most basic Scubapro rental regs in the end! Haha. Now I am even more back to basic, of course, since all I need is a fin. The beauty of freediving. 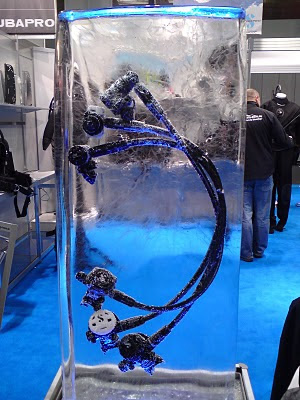 I was utterly amazed when a whole load of people turned up to my mini seminars, which I held at the SSI stand, in full view of Linda and Lotta, who were equally surprised, I think. Why do people want to come and hold their breath with me? Sitting on a carpet, in the middle of a busy trade show? I simply cannot get my head round it, and keep thinking, never mind, no need to prepare, no one will come anyway. Hmm. Seems I was wrong, and I have to congratulate a whole bunch of adventurous subjects on doing dry statics of up to 3min20sec!! You lot are all mad, you are.

Monday I was supposed to have an easy day, with some medical tests at Düsseldorf University hospital, in the name of science - supposed to last for about two hours, thus giving me time to say my goodbyes at the show and get on the road to drive the 600km to Berlin. Now here is some advice from me: if a bunch of fancy and terribly clever heart specialists get their hands on you, don't expect to get out of there anytime soon! We started at 9:30 in the morning. Since I was expecting to be made to hold my breath, and I hate holding my breath, I did not eat breakfast or drink coffee. We finished at 17:00, and I did not eat, drink coffee, drink water, use the bathroom, or do anything other than hop from one examining table to the next!

Anyhow. I rushed back to the show, had three meetings in the last half hour, and stood at the Unterwasser-party at 18:30, feeling pretty dazed. Dietmar Fuchs asked me if I wanted a beer, and before I could say no, I still need to drive to Berlin, he put a mug in my hand and thus ended the discussion in my head that was going something like: "drive-don't drive -drive..." All was well and I was on track for a good night rest before hitting the road the next day, until someone, who shall remain nameless, announced in a rather bossy fashion after dinner: "Altstadt. Alle. Sofort!" Meaning: everyone to the bar. Now! It appears that the nameless persons are dangerous to be around when they get into the bar-bossy-mood, but no one warned me! At 05:58am me and my new roommate (she kindly picked up the poor, stray, homeless Anna) Dragana set our alarm. To 07:00.
I leave you to imagine the rest.

I am off to the freezing hillsides of Colorado tomorrow. Since the new team jackets make you visible but weren't made for women in terms of insulation, I went out yesterday in search of a new fleece. It was my full, my only, my most serious intention to locate and buy such item. Problem was, I was in London and thus in city-Anna-mode. City-Anna did not want to buy fleeces. She instantly located, and bought, a pair of spikey heeled leather boots that are unlikely to keep Snowboard-Anna warm in Aspen.