I suppose you have guessed by now, and it is, unfortunately, true: my long absence from these pages can only mean one thing. Sum of all freediving training sessions since – hang on – July!! is: zero. Déjà vu springs to mind. I guess there are some things in life we just have to repeat over and over again.

I did have a bit of fun at this years’ top notch diving event in the 20m deep indoor dive center dive4life: the SSI Dive Trophy semi final, where the 100 best divers of the year fight it out in various tests. This year, a freediving challenge was added to the mix. I arrived Friday evening, got carted to the tank and thrown in the water to film a demonstration video. After I quenched ideas such as: let’s make the contestants (who have never done any freediving, mind you!) hold their breath for as long as they can at 10m depth, so as to maximise the black out potential, we came up with a safe but reasonably challenging (I thought) version. Dive down to 10m along a line, each meter gets you one point. Still feel strong? Swim ten meters across and up to a line at seven meters depth, detach a karabiner with a key ring and swim to the surface with this token. Total points: 30.

You would think this might be fairly difficult for complete novices. When shown the demonstration video during the briefing gasps of horror where heard from contestants. With hindsight, though, I realize that I have strongly underestimated one important factor: the desire to get points! An amazing two thirds collected all thirty of them. At times I thought they might need rescuing any second, but few gave up. Amazing, and annoying, since this meant that I had to keep going down to re-attach the key rings. A total of around four hours in the water and 68 dives later, I was quite ready for my dinner. I’ll think of something tougher next year, guys!

I went to stay in London for a month, fully focused and ready to train hard, but got floored by a nasty cold, so spent four weeks on the sofa instead, getting grumpy and fat. A single static session with Liv had me start contractions after 42 seconds. I believe this may be a world record. It has yet to improve. I have decided that altitude training is always a fabulous idea, and since the guys from Pure Boarding were twisting my arms very hard, snowboarding season has come early and I have somehow spend three weekends on glaciers already - it has to be good for dynamic. Right? 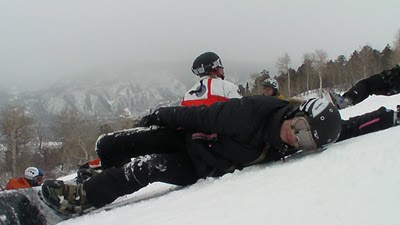 I was so panicked about not training that I decided it was a brilliant idea to go for a run after the first day of snowboarding of the year and hit upon a very clever plan: as we left in the morning to drive up to the glacier, I asked Sebastian to check where exactly we would reach 10k. On the way down at the end of the day I got changed in the back of the van and then hopped out to run back home. With a look of disbelief on their faces, Simon and Sebastian left me behind, to enjoy the beautiful mountain loneliness. I loved it, but had failed to take into account that I was running at around 1800m of altitude. Punishment for such stupidity soon follows (well, the next day), of course, but then you have to keep up appearance for the smirking guys. I think I didn’t do too badly and none of them noticed that I had, in fact, been close to unable to get out of bed.

Last weekend we headed up to the Kaunertal glacier, in Austria – it was a staggering -20°C. That is a bit fresh for a girl with low blood pressure, and as we stopped for a coffee break, I discovered that I had lost the front half of my feet. Toes? What? Where? Fortunately I was with a bunch of gentlemen who didn’t want to lose the only female in their midst, and took turns helping to defrost me. I did not notice the wind blowing in between my helmet and my goggles, though, and ended up with a bump across my forehead, from frostbite, making me look just like Hermann Munster! Terrifying. I hope it will be warmer when we hit the Dolomites next week.

We have a new guy at Pure Boarding, by the name of Tobias, who is a sports teacher and clearly likes a challenge. One night at dinner we had the usual so-how-long-can-you-hold-your-breath-conversation, and I told him anyone could do two minutes, which resulted in the two of us doing statics in the hotel spa pool after snowboarding all day! He did very well, considering the less than ideal circumstances, and appears to suffer from a thing called the competition gene: first thing he demanded to know afterwards was if I could watch two freedivers at once, so that he and Sebastian could go head to head! I thought I should train, too, and did the one minute/one breath table. I managed six. Just to give you an idea: I have done 17. Aaargh. 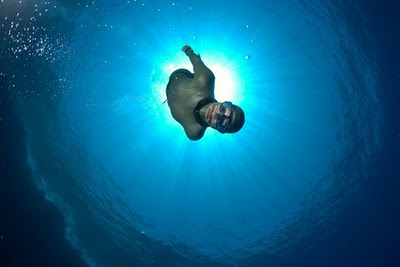 Have started doing dry statics in the morning. I start contractions before the first minute is over, and have so far pushed myself to an amazing 2:30. I think aliens have kidnapped me and have replaced the German freediving champion with a thing called couch potato.