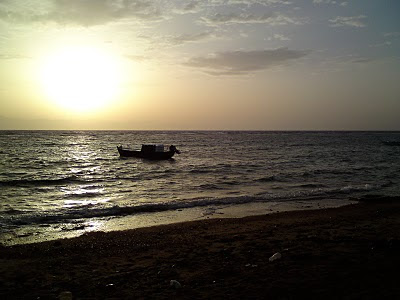 I believe I may have said things like „snowboarding season is over“ in a previous post, and I did have every intention of starting the freediving season with a two week trip to train and compete in Dahab. What I had not considered when I based half of my homeground in the UK was that in the case of a volcanic ash cloud arriving, you are STUCK. You are not going to leave the island. Trains, ferrys, boats, were booked up days in advance. In the end I secured one of the elusive Eurostar tickets and made my way to Cologne via Brussels, nearly getting into a fist fight with a big fat man who took my seat, arriving wound up and grumpy at the magical „Dive4Life“ indoor dive center. They had kindly offered to help me to get at least some training done, and I spent two days there doing FRC’s and swimmig around the underwater temples while the staff looked after me. This wonderful facility will be my regular winter training ground from now on. Check it out: www.dive4life.com

I arrived in Dahab a week late, and did all of five days training. It was brief and messy and I do not feel ready and in freediving mode at all, which has been made worse by a slightly insane extention of winter mode. In my defence: the guys twisted my arm! Jörg, Sebastian, Remo, Simon and the rest of them had been telling me all along that I simply had to come to the carving masters in Sölden. When I said I couldn’t , because I was only coming back from Egypt on the Friday, they said I could fly straight there. Hmmm. Ok. Possible. My next objection was that I could hardly take my snowboard and gear to Egypt with me. Sebastian told me he would send a UPS sticker to have my stuff picked up and delivered to him, which he would then bring. They were set on removing all obstacles from my path, so what could a girl do? 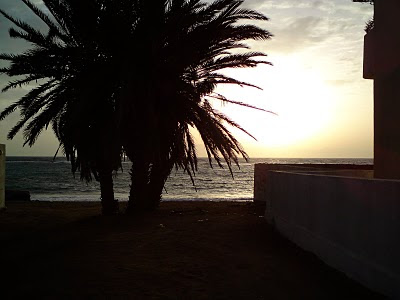 At six in the morning I was outside our apartment in Assala, on the beach, watching the sunrise while waiting for the taxi. A mad journey later, having nearly missed every connection along the way, I got off the train at the Ötztal station, at the bottom of the beautiful Ötztal valley in the Austrian alps at eight in the evening and told a surprised taxi driver that I wanted to go up to Sölden, the ski resort, with my monofin and my suitcase full of bikinis. 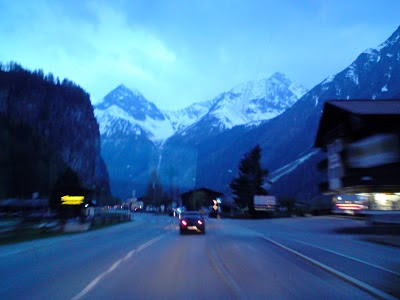 Shortly afterwards I was in the Black&Orange bar, with the whole carving crew, drinking beer and dancing about to ACDC while still wearing my bikini, which the guys seemed to think was quite exciting for some reason. Since I wear nothig but bikinis for weeks during freediving season, I couldn’t quite see what the fuss was about, but there you have it. It was a surreal day, but those kind of adventures make life exciting, so we proceeded to drink lots until three in the morning. The next day we went up to the glacier, but I felt like I was on holiday so did a total of three runs and then succumbed to any suggestion of coffee coming my way. It was lovely to see Anja and Biggie, fellow carving girls, who joined me in the non-snowboarding-cappucino-drinking Saturday. Sunday was so foggy, you could not see a thing, and it was snowing, too – I promise the gondola is here somewhere: 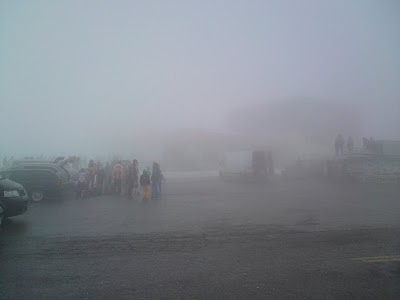 Imagine being on the beach in Dahab one day and then out here, snowed on, the next. Here I am, with my fellow Black&Orange companions the brothers’ Keucher, who took good care of me all weekend (I believe it may have been necessary, as the amount of Coronas consumed exceeded two...). I am still wearing my bikini underneath, but as you can see, it failed to make the sun come out: 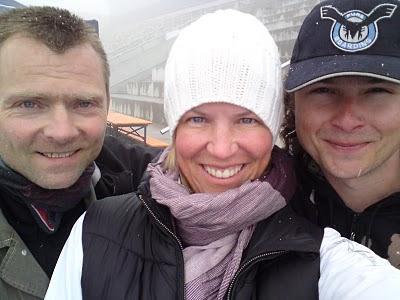 Arriving back home in Berlin very late Sunday night, I was certain that my snowboarding season was over, inspite of Sebastian’s suggestions that he would take me along to the final pure boarding glacier trip the following weekend. I had a workshop to teach, after all, so I threw my old and quite broken snowboard boots in the bin and packed away my gear. Ooops. When I called the divecenter on Thursday, there were too few students to run the course, which I took to mean that the carving season had not ended yet, after all! An email to Jörg confirmed the availability of hire boots, and Sebastian put the extra seat back into his van for me, and off we went, to the Alps, again. We arrived in time for dinner and a few drinks, till three in the morning, then got up at seven, for a sunny day with excellent snow. The weather moved in in the afternoon and in a moment of freediving-training-season-guilt, I put my running shoes on and went out to do a round instead of having coffee and cakes at the hotel. The guys were very upset that they did not have their trainers, claiming they would have come along otherwise, but I must say, I did not miss them and had the most beautiful lonely mountain run in a light drizzle. It was just lovely to be out of the city.

The evening brought more drinking, till four, followed by a stunning sunny day, simply a perfect end to the season. Now it is time to get focused though, since I do have some hope to hit new depths pretty soon. In fact, the mediterranean freediving meeting is coming up, and I will be out in Greece, reporting on all the nonsense the various freedivers get up to.

Going off to do some lungstreches right now. Party mode is over. Honest!