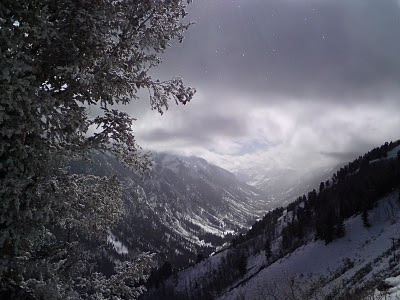 Yes, it's that time of the year again. All thoughts of diving have been wiped from my mind as soon as the first snow fell sometime in November and were instantly replaced by yearnings for a different kind of paradise: Aspen, Colorado. This was my third trip over there, and I am not getting tired of the 26 hour journey at all. In fact, take me there, anytime. Right now would be just fine by me.

We were greeted by the hotel driver with complaints about the lack of snow. I don't think any of these guys have ever been skiing in Europe. Lack of snow to them means that you can't ski the highland bowl in hip deep powder. There was not a bit of ice in sight on the slopes, which were in fantastic condition, as always. Jörg Egli and his pure boarding crew had put 37 snowboarders into the Molly Gibson Lodge again, who hit the slopes in time for the first lift every morning, and did their best to destroy the runs with lots of deep carves before lunch.

After an easy start at Buttermilk mountain we headed out to Highlands next. Taking the lift up to the very top brought memories of a very tough hike up to the highland bowl the previous year, and Jörg sure did drop hopeful comments all along the way, trying to see if he could get someone to take up the challenge. He was a bit half hearted, though, so we were saved from this adventure for now - mostly by a lack of snow. If I am to climb up to nearly four thousand meters, permanently on the brink of fainting from lack of oxygen, I at least want to be rewarded by a fantastic powder run. So instead of hiking, we stuck to taking some nice pictures with the (admittedly beautiful) bowl in the background. My favourite one is this one of Anja and me, both looking all sporty and like we are just going to sprint up there easily: 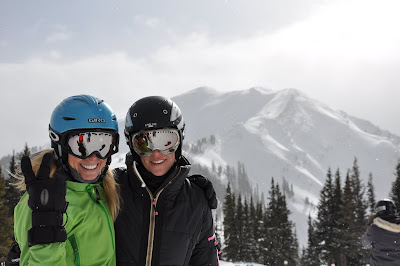 Of course, as soon as Jörg sees two blond girls and a camera, he has to get in the middle:

Now Jörg is looking all sporty here, too. It's the helmet. Just before this picture was taken, Anja and I rode with him up the chairlift. He sat on the right, and Anja and I had to both sit all the way over to the left, but the chair was still down at his side. "Muscle is heavier than fat" said the man. What fat? Anyway, he is apparently in best shape ever, but had to take a break towards the end of the week, to "rest his knee". Hmmm.

I had a lot of fun riding with Anja, it's great to have another carver female in this macho sport. Who else can understand that it is a shame yet lucky at the same time that we are hardboot riders, since the designers have discovered that soft boots can be made to look cute, which would result in more shoe (or boot) buying and endless outfit-options-anxiety! Anke, Anja and I are going to have a great time at the world carving session in Austria, we might have to develop a few girly moves, too. Meanwhile, I was feeling well prepared and strong from the Wolkenstein bootcamp, and ready to try out my new style on the Aspen snow. There was some progress made, thank god - there is nothing like a photographer, or, even worse, a guy with a video camera, to show you how you are not at all looking as hot as you think. Here I am, thinking I am well on my way: 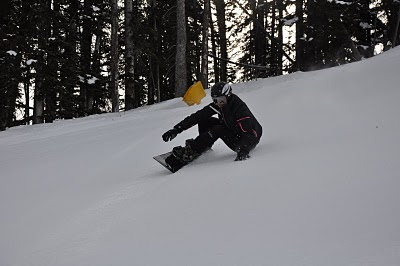 Oh well. Room for improvement, is all I can say. I kind of knew that things were not quite right yet, when I kept having this big bruise on the left side of my bottom. Checking with some of the pure boarding hot shots, it was soon clear that their pants were worn down at the hip/side instead. Here we are back at Remo's lessons of "rotation, rotation, rotation". You know you have rotated enough when the bruise appears on you hipbone, or when your brand new skipants look like this: 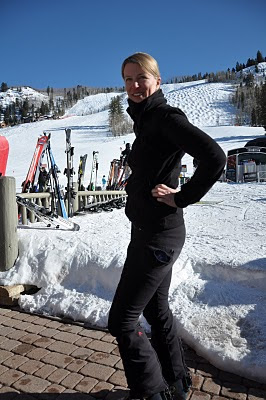 I spent an afternoon riding with Andy, who was filming, so I was giving it my best effort. After a couple of runs I began to feel that my left leg was freezing, and when I checked, I realized that I had worn down my pants and gathered a thick layer of ice and snow inside. Andy took the above picture of me - I'm clearly feeling all smug and happy for finally having destroyed my trousers. Note how the hole is in the right spot, which is because I was doing this all day long: 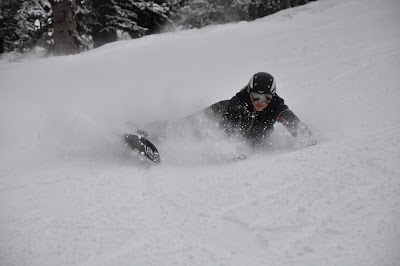 It is so nice to get something right, occasionally. We were of course not in Aspen to just have fun on our own. It is a serious time of the year: the World Carving Session. Carvers arrived from all over the world and cleared some of the runs of skiers. I got to ride with Dan from Canada again, as well as Steve, both fellow highland bowl adventurers and equally happy to miss out this year, I think. Ken was here, too, and he is still doing the tightest turns ever, it's impossible to follow the guy's line. Dan was going for it full on and threw himself at the pure boarding style, which ended up in an equally big hole in his trousers. He was heard singing to himself: "pants on the ground, watcha gotta do is get your pants on the ground.." while riding along. When asked his age, he pretended to us girls that he was sixty years old, but we are convinced that he is pulling our leg, and doing a reverse adjust-your-age thing: If you tell everyone you're ten years older than you really are, they will all go: wow! You look so young! He was up to some tricks this year, too, chasing us through the trees at Snowmass when we had a day with some fresh snow - it was some of the most fun I have had in a long time. 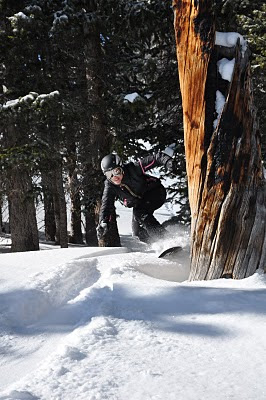 In the second week things took a turn for the worse, when I developed a toothache that quickly became impossible to ignore. A visit to the dentist confirmed that things were bad, with a massive infection, so I was on antibiotics and lots of painkillers right away. Somehow, the stars had conspired to give us dental disaster week: Anja's husband Ray joined me in the toothache hell and after hoping it would all go away for a while, much like me, gave in and faced the fact that he was in major dental trouble, too. He was a bit smarter than I was, though, and when the dentist suggested a prescription for painkillers, he immediately said yes, please. He was put on Vicodin, which was rather funny: Ray is an awesome rider who comes screaming down the mountain on his Virus board, much in the manner of a black menace. When I saw him in the bar after consumption of said Vicodin, he moved slowly and smiled sweetly at everyone, looking a bit like he was floating on a pink fluffy cloud. I have a feeling I might have missed something funky by sticking to regular drugs...

In the middle of all this, my favourite Canadian dentist carver Dr. Steve Buck arrived. When I told him the state I was in, he looked seriously distressed, and said: "Oh no. You can't do that around me!" I was under the impression that he was positively upset because he couldn't fix us. He really was of no use at all, which is even worse since he manages to look like one of those rare dentists into whose hands you would gladly put yourself with complete faith. I have been wondering why this is. I don’t think being a great carver or wearing the loudest jacket on the mountain can be reasons for inspiring a possibly ill-judged sense of trust in others. Maybe it is his size, him being rather tall? We suggested to him that he should fix all our problems in the afternoons next year, and sell the whole thing to his wife as a business trip, which I still think is a great idea. 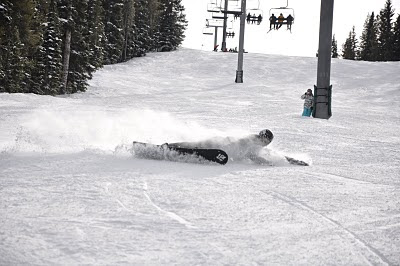 Inspite of pain and drugs, we were up there carving all day every day. Once again we had Remo chasing us with a camera, doing a whole load of filming whenever possible. You may remember that last year, I was chided for my outfit, which did not transfer well to film and, according to Jörg and Remo, looked like I was wearing a curtain. This year, faced with a choice of jackets striped in lilac, grass green and turquoise, I finally gave up the search and went for all black. This was not to Remo's liking, either, and boy did I hear about it! Now that I have destroyed the pants and the jacket is on its' way out, it looks like I need to start again. Jörg has suggested that he will be choosing my next outfit, which is just fine by me, since then it will be his fault if Remo the cameraman is not happy. Apart from filming, Remo has been riding fantastically well, I just love trying to follow him around the mountain. I managed to catch him doing an amazing wheelie, in one of the rare moments where we got to turn the camera back on him, which will hopefully be on youtube soon, so I can post a link.

Back in Berlin, the dentist did not have anything good to say about the mess I was in and put me on even more antibiotics, which means I now go to sleep as soon as I sit down anywhere. This is not a good state to be in when the German Championships in the pool are on tomorrow. Once again, I will be there to coach others. This is even more annoying, since my long break from training has lulled me into into a vague feeling of actually wanting to do some statics!