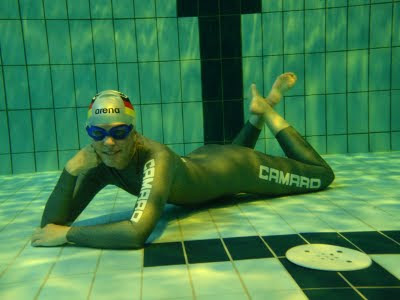 This is it: the freediving competition season is finally over for the year. I cooked dinner for Daan, Eric and Martin on Friday night (we were all in the long night of apnea the next day), which was very nice, since I was able to do all the moaning that is part of my preparation, and they listened to my growing list of excuses with calm and understanding. I won’t say much about the competition itself, except that it did not go as I wished, since I had a splitting headache and a fever. I did learn from previous mistakes, though, and came up safe and clean at 107m dnf.

We had fun watching Daan do a beautiful 169m Dynamic, taking the Dutch record from Eric. After that, I went on to coach Jesper in the evil discipline 16x50. Since Jesper had made a tactical error earlier and had not checked what Polish man Robert had done in dynamic, he was now behind in points and needed to give it his all to try and still win the competition. My job was to make him dive every 48 seconds. He took around 35 seconds per 50m, leaving him less than 15 seconds to breathe. After the fifth dive, he started to look kind of bad, so I switched him to 50sec intervals, and then pushed him as hard as I could – amazingly, he did what I told him to and came in at 12:59, looking a bit dead, I have to say. After all that, he still lost, which I (no mercy) teased him with as much as possible for the rest of the night. 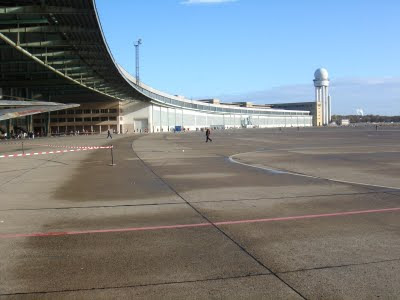 Coach Martin, in a moment of boredom and, one might say, madness, had had a bright idea a few weeks earlier and entered us under the team name “Hypoxic Runners” into the Berlin Team Marathon for the day after the competition. This took place at the beautiful old airport, Tempelhof, and had a total of 1100 teams entered.

Here are four of the five hpoxic runners: Elisabeth, Martin, Jesper and I: 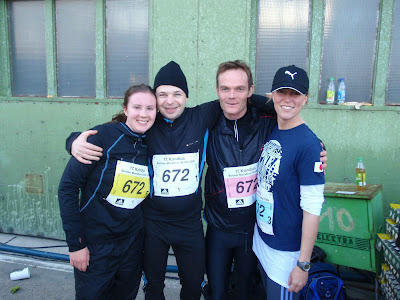 Thinking that Jesper is a fit athlete and seasoned runner, we had asked him if he would like to join us and take a 10km section of the run, and he said yes without hesitation. Then, after having done a killer 16x50, he announced that he had not run in twenty years! A 3km on the running machine a couple of weeks before left him unable to walk the next day. This was not encouraging news for our overall result. In fact, we were getting worried about making it inside the 4.5 hours maximum time allowed. Still, my offer of swapping my 5k section for his 10k was instantly declined. It’s a man thing, I believe.

Having jumped out of bed far too early, we established our team base at the Tempelhof airport and got ready to send Martin off to run the first section of 12,195k. He returned in 1hour2min, which was a great start, and handed over to Steffen, who discovered his competition gene and pushed himself to run 10k in 52min.

Here I am with Steffen, hypoxic runner number five 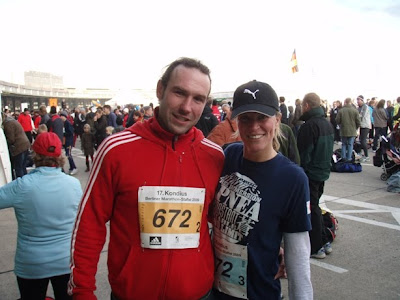 I was next and need to write a letter of complaint to Polar: minutes before I was due to start, I discovered that my nice new training watch does not have a stopwatch function! So I arrived back at 30min8sec, passed over to Jesper, who was nicely nervous by now. Getting ready, Martin watched him in amazement as he removed the price tag from his brand new running shoes! He arrived back after the first 5k round looking like it was hurting, but in a good time of just under half an hour. Here he is, passing the plane in his shiny new shoes: 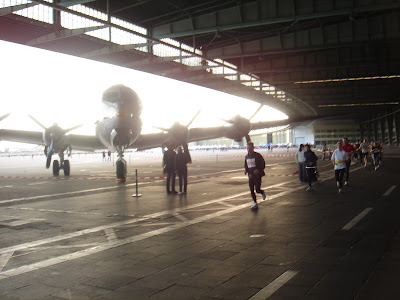 This had us all thinking that the second round would surely finish him off, and we would not see him again for a long while. There we did not count on quite how competitive he can be, since much to our surprise he crossed the line, close to death but breathing, after just 1hour1min. Elisabeth had the last 5k to run, and stayed just under 30min, taking us to the finish in a total time of 3:56:and a bit.
It was a fantastic event, with a total of 1100 teams entered. Since we all have the competition gene, we immediately decided to do this again next year, and are hoping to have at least one more freediver’s team to compete against – so get your running shoes ready, guys!

Jesper says his legs are fine. I don’t believe a word of it.