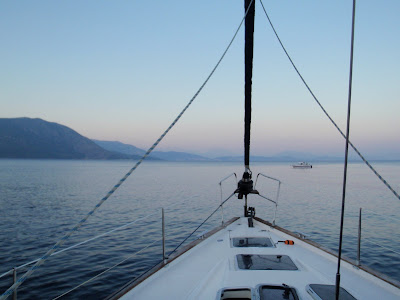 I had it all planned out. First, train hard, then, compete in Aarhus for two weeks, then, work hard. Something happened to the “work hard” bit, and that something is called William Winram. Here I am, a good girl, at home, not planning any trips for a change, when I get this phone call from Will. A place has become available on a 15m yacht, cruising, diving, teaching (Fred and Will) around the Ionian Sea. Thinking that I would surely be saved by the non-existence of any flights at such short notice, I went online. Ooops.

A few days after the worlds, I found myself on a boat, about to set sail from the Greek Island of Levkas. With me were Fred Buyle, Will, Chris Marshall from New Zealand whom I met in Aarhus, Kattie Lussier and Kate Adams, plus Sam Tanner and Fabrice Enthoven. Fabrice, who managed to keep from us the important information that he owns a bar and a restaurant in Brussels (am on my way), let slip towards the end of the trip that he knows Fred from “the bar” and that he can testify to the fact that Fred knows how to “make good party”. Seems that Fred in the city is quite different from the “I am a healthy, in tune with the elements, sailor, diver, spearfisher” type person that was on display for the students during the week. On consideration, I guess my “London-Kings Road, handbag, high heels, designer shades, now give me my latte” persona has little to do with the saltwater afro hairdo, frayed denim and bikini top woman on the boat, too. Now Will – I think he might just be the same, wherever. Redneck out of the trailerpark, and all that. Never mind, you’ll get it when you meet him. Here is a picture of sailor-Fred: 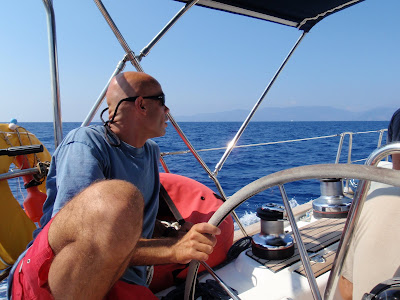 First job was to make sure we’d be well supplied. When Will and Fred asked who liked to cook, I made a crucial mistake and stuck my hand up, followed by another crucial mistake in letting the guys go off to buy vegetables on their own. They returned with random items, including, in Greece, on a sailboat, 36°C in the shade, a CABBAGE! Why anyone would want to eat cabbage anyway is a mystery to me, but on a yacht in the Mediterranean Sea? Needless to say, I ignored said item, which turned into a bit of an accident when the thing went off and made the whole fridge reek in the most evil fashion later on.

We had a few incidents involving apnea brain on this trip, the first one in the supermarket, when we all agreed that we needed salt and pepper, but no one put it in the cart. My excuse is, I just did a 6:12 static, which has clearly reduced my brainpower by 50%. It turned out that we needed at least two heads for any mildly complicated task, usually me and Fred. Examples included: turning off the alarm on the autopilot, operating the winch on the mainsail, operating the drain for the shower (this needed three people), and, the worst, switching on the strip light above the stove. I was trying to keep this one quiet, but Fred had no mercy on me and let it out, although I was holding his mouth shut as long as possible: he found me cursing over the pots, trying to turn on what looked like a lamp to me, but was in fact – this is so embarrassing - a blind. You can imagine the hilarity that ensued. Had I not been in charge of dinner, and therefore a VIP on the boat, I think it would have been a lot worse.

Before we got in the water for the first time, we were made to go through a Winram/Buyle tradition: we held a moment of silence. For all the people on the tube in London, Paris, Tokio. I think this is a very appropriate thing and am happy to give the poor people in rush hour a brief thought. We soon got on with it, though.The purpose of the trip was to teach us some aquaticity, which was wonderful. I have learned the spearo duck dive, and am leaving the surface a lot more quietly now, which is well necessary if hunting for anything in Greece. Fish here don’t live above 20m, so Chris and I were taken out to spearfish into the deep, blue water by Fred. The guys showed me how to swim with the gun so I wouldn’t shoot myself in the head or foot, then let me head on down, out of sight. 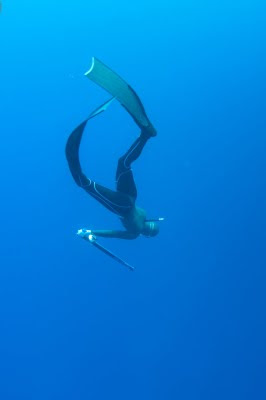 I tell you, I was not expecting to go looking for groupers as deep as 32m when I came on the boat. I did take a couple of shots, but missed, of course. Might have something to do with squeezing my eyes shut when pulling the trigger. Chris did not fare much better, and he has no excuse, being an experienced hunter, after all, and a man. He did point out that fish in New Zealand live above 15m, but it seemed he had no problem spending stupidly long bottom times down below 25m. In the end, it was up to Fred to show us how it’s done and catch our dinner. Here is a photo of me, stalking. Since we did not find any fish anywhere, I posed for Chris who was out with his camera instead. Just imagine that this is at 32m. 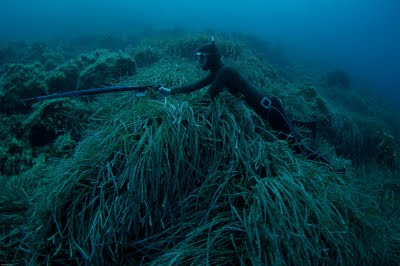 Will could not join in the fishing expeditions, because he was unable to pull the trigger. This is a longish story. Basically, we broke him on the first day of sailing. First, he tried to rescue an escaping rope (or sheet – sailors are weird) and got nasty rope burn all over his fingers. Then, he tried to rescue the escaping anchor chain and dislocated a rib, on the other side, so both arms did not really work anymore. Since I am first aid trained (it is a scuba instructor thing), I felt it was my duty to go in search of some disinfectant. The first aid kit produced nothing but an ancient bottle of Iodine. This they still use in surgery in hospitals, I believe, but usually only after they give you the general anaesthetic. Will asked me to “just pour”, so we went to the back off the boat and got on with it. There was a moment delay, so we all thought it was not the stuff that burns, after all, until we were treated to some pretty good screams seconds later. Chris had produced his camera from somewhere and documented the whole thing in a series of pictures that show an amazing range of grimaces, including Will biting his arm. I felt bad, is all I can say. Anyway, I could post one of these photos here, but have decided that it was a far too private moment, and am going for the following image instead: 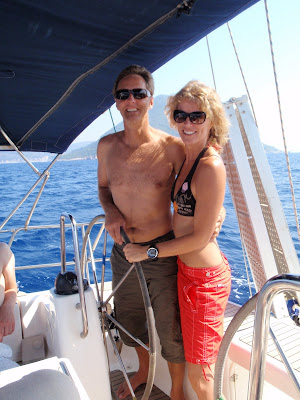 Here are Will and I, looking kind of cute together, I think. Will’s wife gets terribly seasick, thus leaving the field open to us to flirt shamelessly with her husband. All my efforts were wasted, though, and this picture was the best I managed. I think I am losing my touch. It is tough on a boat, when a girl does not have important items such as spiky heels to assist her.

The week was just beautiful, I love sailing. It is a wonderful combination with freediving. Everyone learned loads, and I think even Will believes that my no fins technique might not be completely hopeless, anymore. Unfortunately, I will now have to go and practice this awful discipline. Maybe I’ll just go spearfishing instead. My only problem is, I just can’t load the guns, so I will have to find some male buddy to do this for me. Chris and Fred seem to think that this will be very easy.

Right. Want to hand a blond girl a speargun? Anyone?