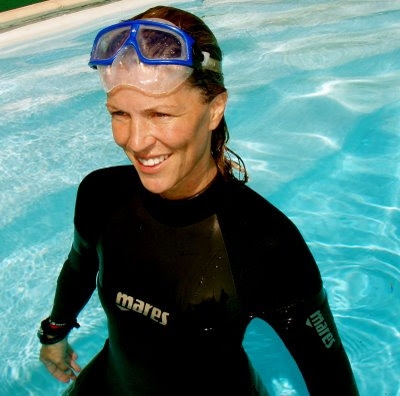 Readers of my blog might have noticed that I have been complaining about pooltraining, or lack thereof. So far, I have been able to make up a startling variety of (good) excuses for this, including such things as: was forced to work, was forced to look after sick boyfriend, was forced to go off to Aspen, snowboarding. Well, the last one is not an excuse, by all means, it’s called cross-training.

I have spent rather a lot of time in the bookshop in the last few weeks, which, due to the supremely miserable weather, means that I have spent hours looking out the window, at the rain, while intelligent people, such as my customers (well. Most of them, anyway), stayed at home, watching mindless things on telly. This has provided me with plenty of empty time, some of which I filled by pondering the pool dilemma. I have reached the following conclusion: since attending regular training sessions over the winter months, say, twice a week, like normal people would, simply does not agree with my chaotic lifestyle, I need to apply the “Dahab Method” to my training. This means: take a couple of weeks, a month, anything, and train, train, train. Then do record. As it was looking like I was going to have to stick around in Berlin for the foreseeable future, now seemed as good a time as any. In what I might regard, with hindsight, as a moment of madness, I announced a record attempt in all three pool disciplines to AIDA Germany.

Sometime around four o’ clock this morning I began to realize what I had done. It means I have to swim at least 100m without a fin, 135m with a fin, and, if I go for static, too, hold my breath for over six minutes. I think I might save that one for later. The problem is, there is no bailing out this time. On the first weekend of May, judges, safety divers, camera operator, doctor and most likely a TV crew, will turn up to see me break a record. If that doesn’t provide me with motivation to train, I will give up on all pool disciplines this instant and take up knitting instead.

The whole thing is possible because my gym, Elixia, is allowing me to train whenever I like, plus bring a training partner. They are also letting me have the record attempt in their lovely pool. Then there is Martin Müller, who is my partner and coach throughout this project and has promised to kick me whenever necessary. We are planning to train six days a week. It’s amazing. Me. Training. In the pool.