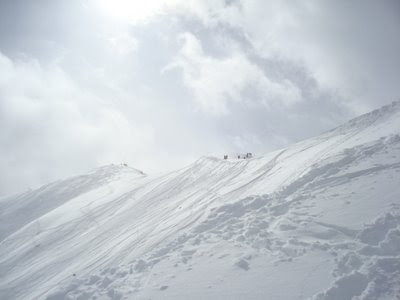 Ok, I admit, it has been a while since I have posted something here. This is because I had the idea in my head that this blog was supposed to be mostly about freediving and training for it. Minor problem is, I have not done any training, and we won’t even speak of diving. In fact, I have not seen the water since the WWF event in November. Someone mentioned that things might not be going quite in the right direction here, and I have to admit, I agree. Pooltraining? Pfff. Some of my freediving friends are complaining, since I keep promising to meet them at competitions and then don’t turn up. My excuse is, life is chaos. Excuse number two: I am always sick before a pool competition. Now don’t mention the word psychosomatic. It is not. Promise. I love pool training, love it, love it, love it. Next!

One thing I did manage recently was to go off to Aspen, Colorado, to indulge my addiction to snowboarding. The problem with Aspen is, once you have been there, you don’t want to go anywhere else anymore. They have the audacity to get around six meters of snow per year plus, and this is true, 300 days of sunshine. One might think that it’s not possible, but take it from a girl who has seen it with her own eyes: it snows at night. Apart from this, Aspen is unbeatable because the people who go there go to walk their doggies with little coats and boots around Burberry, Dior and Ralph Lauren. If they hit the mountain, it’s to take their designer shades for an outing to the sundeck at Cloud Nine restaurant. The advantage here is twofold: watching this crowd provides endless entertainment, and they don’t actually visit the slopes, so when you arrive with a group of crazed hardboot carvers, you essentially get your own private runs.

This is why the WCS (world carving session) is hosted in Aspen every February, and attracts around 200 boarders from around the world. The ones I arrived with consisted of Jörg Egli and his Pure Boarding crew, with 27 riders from Europe in tow. Ready to get onto the mountain, I turned up at the Buttermilk lift the first day, only to find that my lovely snowboard was in pieces. The topsheet was delaminating. While the board went in to be glued, I ended up with softboots. It hurt, is all I can say. How do people ride with these things? My attempts to do the same stuff I usually get up to with this set up left me with a giant purple bruise on my left shin. Fortunately, Jörg arrived and gave me one of his very own Swiss made boards, the Pure Boarding ‘Two’. After a couple of hours, I was having a great time. My declared mission this winter (well, apart from the ‘I will do lots of pooltraining’ one) is to finally improve my carving, and since Jörg and Remo were the best riders anywhere to be seen, they had me stuck to their heels the entire time, poor guys. Trying to follow them around all day generally results in two things. One: sore muscles. Two: humiliation. Jörg (the man has eyes in the back of his head) has a habit of whizzing by with his ear on the ground, only to turn around and ride in front of you, exaggerating your mistakes, showing you how silly you look, while laughing. 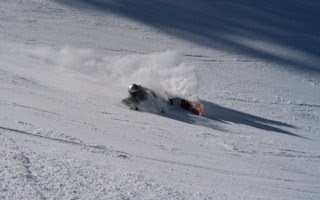 This got me so annoyed after a while that I managed to reduce the ‘looking stupid’ parts of my bad habits a tiny bit. The final turn around happened in the second half of the trip: My own board, although glued, had not survived past one morning and was consigned to the rubbish heap. Some battings of eyelids and “Jöööööörg, I have a problem…” later, he gave me the secret board to ride. Now I would like to declare at this point how grateful I am for this. There are a few names in circulation, most call it “the Thing”, although I think “Phantom” describes it more closely, since few people have seen it. Except me!

The morning I headed to the mountain with the prototype, I thought, here we go, get used to something new, again. Matters got worse when Remo, designated Pure Boarding movie maker, told me to wait for Ray, Steve, Ken and Dan (four ridiculously good riders from Canada/USA) and take them over to where he was filming. So instead of having a quiet moment to get used to the Thing/Phantom, I ended up having to perform my first few turns with it on camera, watched by a crowd of cheering guys. No pressure there. The amazing thing was, from the second turn onwards I most likely rode better than ever before. To find out what was really going on, I slipped away from the boysclub to go practice on my own. 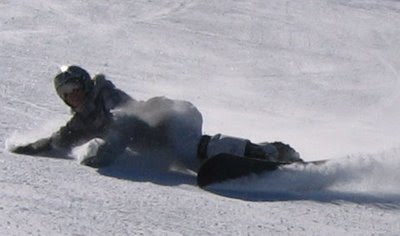 I soon realized it was no mirage: the Phantom transformed my riding. When the guys caught up with me again (“where did you go?”), they wouldn’t believe that all that had changed from the year before was time spent glued to Jörg’s and Remo’s heels, and the Pure Boarding prototype under my feet. Needless to say, I instantly informed Jörg that he could not have the board back till the end of the trip. I might have batted my eyelashes, or maybe it was the huge grin I had on my face, but behind all that tough guy persona he is a soft hearted man and can’t say no. What followed where some of the best boarding days I ever had. Check out the ghost carver riding the Phantom at Aspen Highlands on

I was now in full swing and busy trying to lay down some turns. Since the end of the trip was approaching rapidly, this was all I wanted to do. I should have known there would be trouble when I headed to Highlands after two nights of snowfall, with seven men. All was well until we had a hot chocolate break and someone informed us that “the bowl” would open in thirty minutes. Here is a picture of the (in)famous Highland Bowl: 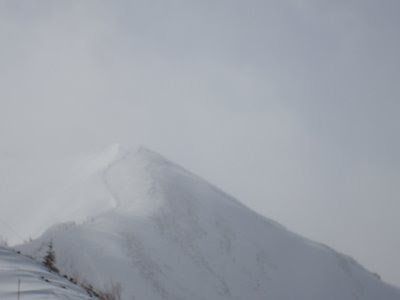 This is what you do: take the chairlift up to 3500m. Then hike up to 3779m. Then ride down. Piece of cake. Tiny problem: me with my little lungs and low blood pressure at nearly 4000m. Hiking. I get dizzy when I put my bindings on at 2500! I was having visions of struggling up the ridge behind a bunch of superfit guys, who would be at the top waiting for me for anything between 45min to half a day. No way was I going to get myself into such a mission. Of course I had not really counted on Remo and Jörg. Remo: “you are coming”. Well. 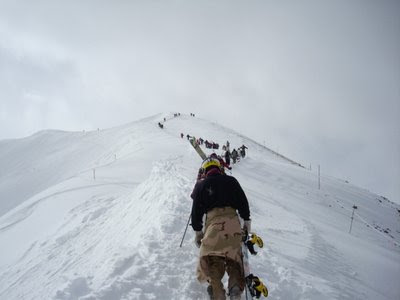 Twenty minutes later, I was on my way up the ridge. Remo told us we could get out before the top. Problem is, I don’t do too well with a challenge, so if there is a crowd of guys headed all the way up, all the way it is. This meant that the whole enterprise was going to hurt (a lot) and required a plan. The only one my oxygen-starved brain could come up with at this point was: don’t faint and fall off the ridge. So whenever my vision got blurry around the edges, I stopped for a breather. Just as I was trying to remember whose bad idea this had been, and who to blame for the misery (a man, obviously), I was comforted by the sight of Steve, collapsed in a heap of snow. At least I wasn’t the only one suffering. I thought this was the appropriate moment to teach him a German word which had been going through my mind, and was perfectly suited to the situation: “SCHEISSE”. I think he liked it. An hour later, we arrived at the summit, where I immediately went from hot to freezing cold. After some slapping of backs and taking of pictures, we had a blast coming down in the powder. The phantom board behaved itself beautifully, hardening my resolve to not ever give it back.

Jörg, looking not at all in pain, bastard, halfway up: 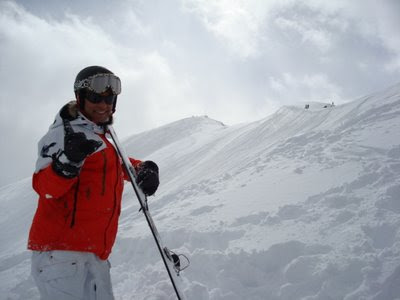 If you want to see some fantastic riding (the demons in the red jackets are Jörg and Remo), take a look at this. More on the Pure Boarding website: www.pureboarding.com

Thanks to pure boarding for a great trip!